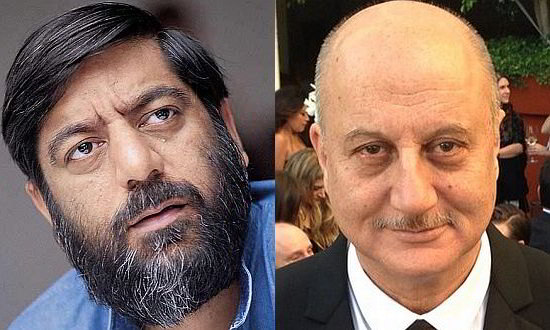 Film-maker Rakesh Sharma has posted this video on YouTube with the following note:

'A Short Film About Lying'

When caught out, he is now trying to brazen it out - not only has failed to apologize to all the viewers, he is now tweeting a link to one of the hundreds of audience Q & A sessions I've had post-screening.

What lies did he utter on TV?
Hear him in his own words here...

Also hear the bits of my Q & A Kher is tweeting as his defence - listen to me describe the charade of a CBFC screening to 'ban' the film, hear me speak of complaints to the Ministry and my precise words "Anupam got wind if it and organised a screening on his own". What did he get wind of? Why did he swing into action suddenly in Oct 2004, despite dozens of newsreports since April 2004 and the 'ban' in July 2004...

On Facebook, Mr Sharma also posted the following detailed note pointing out the full history of the current controversy:

It has been brought to my notice that Mr Anupam Kher, ex-Chairman, CBFC has been making patently false claims about the sequence of events surrounding the ban on my film Final Solution (on the Gujarat 2002 carnage) during his tenure. It seems that on Times Now (April 16) and CNN-IBN (April 17), Mr Kher, while engaging in debates with Anand Patwardhan, said:

Mr Kher seems to be suffering either from serious memory lapses or is indulging in his age-old affliction of ‘creativitis’, merrily distorting and falsifying facts to score points in a live TV debate.

Even though his claims are too ridiculous to be dignified with any response, I do so in the interests of setting the record straight.

1. Final Solution was submitted to the CBFC in March-April 2004, while the NDA was in power.

2. Right from the start, CBFC tried to harass the film-maker by raising all sorts of objections concerning the submission of the application itself (eg, ‘improper’ binding of the script, typefaces etc).

3. Ever since its international premiere at the Berlin International film festival on Feb 5, 2004, the film started getting invitations to several filmfests as well as many awards. At Berlinale itself, the film got 2 awards, including the Staudte Award (now known as Golden Bear for Best Debut), which has never gone to a documentary before or ever since.

The CBFC responded by sending two legal notices to the film-maker on matters outside its purview (customs and foreign exchange related violations for international film festival screenings). The CBFC was formally advised that it had no jurisdiction and these notices were malafide.

4. After many representations to CBFC, an Examining Committee was finally convened on July 30, 2004 where the film was denied certifications and thus ‘banned’. Their exact ruling text can be found on the URL above.

5. Apprehending such a possibility, we had requested two independent journalists (The Telegraph and Mid-Day) to unobtrusively be present at CBFC (with an asstt director) to observe the entire process. The committee took less than 3 hours to watch the film, hold extensive discussions and then draft a ruling citing all relevant legal provisions therein. The problem: The film was over 3.5 hours long! Both the journalists published details of this sham the next day. I personally wrote to Mr Kher at CBFC on Aug 4, 2004 (see bwlow).

6. By this time, at the centre, a UPA government was sworn in following NDA’s defeat in the national elections. I now approached Mr Jaipal Reddy, Minister for I & B, urging him to invoke a rarely-used provision of the Cinematograph Act, to overturn the CBFC’s partisan ruling. In subsequent meetings with him and senior officers of the Ministry, I also demanded stringent action against the CBFC personnel involved in illegal and malfide actions.

7. Following serious protests by the documentary film-makers fraternity, and after the Ministry's own internal inquiries into the episode, Regional Officer Mr Singla was reverted to his parent cadre, permanently removed from the CBFC. Assistant RO Amitabh Sharma was transferred from CBFC, Mumbai to CBFC, Cuttack. As this action was being finalized in Delhi, Mr Kher saw the writing on the wall.

8. He called me and urged me to re-apply; I declined on the grounds that the CBFC had never seen the film in its entirety. Applying to a Revising Committee was tantamount to sanctifying the illegal and partisan proceedings of the earlier committee. Once he failed to have me re-apply, Mr Kher took a suo moto decision to convene a special committee, headed by the noted director Shyam Benegal, which cleared the film without a single cut.

9. 4-5 days after this, Mr Kher was summarily sacked by the Government of India. He accused 'documentary film-makers' of orchestrating his removal, strangely claiming credit for clearing my film, while attacking me for my lack of ‘gratitude’. At the time, I rebutted all his claims, even calling his regime one of the worst tenures in the history of CBFC (reported extensively by all leading newspapers in mid Oct, 2004).

I am deeply shocked to find that Mr Kher is once again claiming credit for ‘clearing’ my film in his TV studio discussions! Factually speaking, Mr Kher and his coterie of partisan officers first harassed me, while refusing to schedule the film for a CBFC panel screening. When they finally did so, it was done with utter mal-intent, hurrying the ban on the film. Mr Kher is believed to have personally called up the Police Commissioner, Bangalore to prevent a public screening of my film as the curtain raiser to the Films for Freedom Festival in Bangalore on July 29, 2004, a day before the CBFC ‘banned’ the film.

If Mr Kher’s conduct as Chairman, CBFC was less than professional and even partisan, his behaviour now defies credulity. His rightwing beliefs are too well-documented to bear repetition here. His association with Panun Kashmir and his proximity to the BJP too have been in public realm. His attempts to present himself as some sort of champion of free speech as the CBFC chairman amount to sheer duplicity and dishonesty.

I’d, in fact, prefer him to resort to the truth and proudly claim his role in preventing public screenings of my film as well as denying it a censor certificate through a carefully-planned drama on July 30, 2004.

I write to register my protest against the partisan manner in which the CBFC has dealt with my application for certification of my film – Final Solution. I am in particular deeply shocked by the charade conducted on July 26 by Mr Amitabh Sharma ( Asstt regional officer) during which the film was allegedly “previewed” by 4 panel members and comprehensively rejected for certification. I urge you to take appropriate action in the matter.

I’d like to put the details on record for your perusal:

I urge you to take action against erring officials and preview panel members for violating various provisions and procedures as their actions constitute a blatant disregard of the law and the Indian Constitution. By refusing me even a single opportunity to be heard, they have violated the very principle of natural justice.

Cc: Shri Jaipal Reddy, Hon’bleMinister for I & B.
Cc: Films for Freedom

Details of members leaving and entering the preview room-

We are summoned inside. We ask Mr. Amitabh Sharma to contact Rakesh over his cellphone and categorically tell him that we are not authorized to represent him for the oral hearing/submission. Ms A intervenes and says ample notice has been provided to Mr. Rakesh Sharma. Mr D suggests that the oral hearing/submission process be deferred till such time Rakesh Sharma is present in person. Mr. Amitabh Sharma overrules him. Ms A suggests that all members have already written out their comments and Mr. Amitabh Sharma collate them and ensure “strong wording” of the grounds of rejection.

At about 5:35, Mr. Amitabh Sharma formally reads out the preview panel recommendation minutes later citing several guidelines and articles. We request him again to contact the producer/director Mr. Rakesh Sharma, who was standing by in Bangalore for any calls from the Censor Board.Mr. Amitabh Sharma announces that the proceedings are formally closed.

Logs prepared by Ms Archana Menon, present outside the preview room with a duplicate VHS and copies of the script etc.

All documents about the above controversy can be seen here

How To Evict Muslims From Hindu Areas: Praveen Togadia