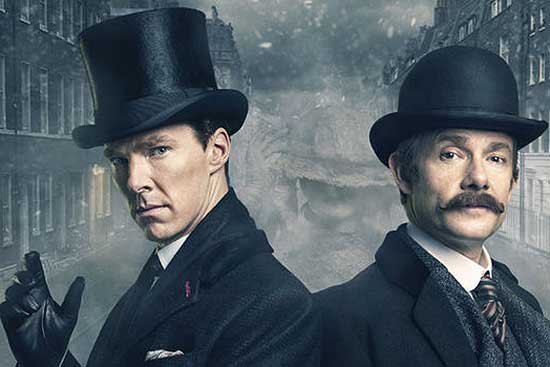 The Sherlock Christmas special was released on New Year’s Day and thankfully sufficient time has passed for it to be fine to write a review with a few spoilers: I am working under the assumption that most (if not all) Sherlock fans have acquired this episode by now, whether with iPlayer or dubiously-sourced downloads.

Of course, it is entirely possible to write a review without spoilers. However in this case, the plot is so strange (arguably bordering on non-existent) that any discussion of why this special fails so spectacularly at everything it sets out to do needs a foray into the final bit of the episode.

Mediocre, flashy and dreadfully pretentious all at once, the plot shuttles between 1885 and present day as Sherlock tries to solve the case of a murderous bride who resurrects after her suicide to kill her husband and then decides it’s too much fun to stop. Her name is Emelia Ricoletti – a name that immediately reminds one of both Emilia in Othello as well as Emmeline Pankhurst, the militant 19th century suffragist raised by a radical socialist (another group that a Victorian Watson panics about without the least bit of irony). Natasha O’Keefe is appropriately melodramatic and wooden as the bride: it is appropriate because it is constantly clarified that no one takes the story seriously, least of all Sherlock.

But once the corpse bride with a ‘crimson wound’ of a mouth shoots her husband dead, things start going downhill. The slew of metatheatrical jokes about narrative, plot and characterisation sound like a list of boxes being ticked for possible entry into New Media modules. Mrs. Hudson’s irate line, “I am your landlady, not a plot device” is the only one that got a grin. The rest were so saccharined up by the Holmes-Watson bromance and repetitive (enough with the deerstalker already) that it was all more tedious than funny.

And finally, an unfortunate project: trying to make Sherlock a feminist enterprise. The effort was half-hearted and almost an afterthought. For one thing, the high point is when a man explains feminism to a room full of dangerously competent women. He lectures. They listen with the occasional angsty glare and quip. Meanwhile his direct audience is Mary Watson who has “put herself in danger” by discovering a bunch of militant feminists in (quite literally) the male imagination. Such a grand feat of patronising lite feminism could only come from someone like Steven Moffat.

Of course, Amanda Abbingdon, who plays Mary, has already defended the politics saying it that since all of it happened in Sherlock’s head, it is fine. This is a bit hard to swallow since the ‘real’ events – Sherlock sitting on a jet, incoherent from substance abuse, being bratty and brilliant­­-- do not take up more than fifteen minutes in a one-and-a-half-hour long show. And, most importantly, it is not even a lot of fun to watch. No one wants empty political correctness to dilute a good story, but it is unforgivable when lazy politics passing for sensitivity leads to an expensive costume drama and nothing better.

Honestly, if this is what a Christmas present from BBC looks like, I would much rather wait till 2017 in fervent hope that they will have time to create better written episodes for this once-beloved adaptation TV adaptation of the Sherlock Holmes saga. Since that has not happened, perhaps it is better fill the time with rewatches of McKellan’s majestic performance in Mr Holmes (2015) and Johnny Lee Miller’s frantic and credible Sherlock in Elementary.