Sholay In Gaza: Trajectory Of A Parody As Rumour And Propaganda 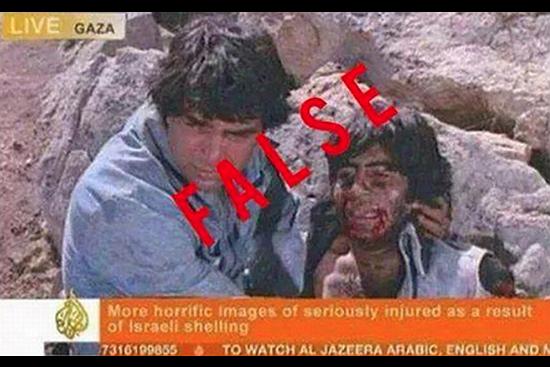 In the end, Al Jazeera decided to merely laugh it off with a tweet:

They needed to clarify further:

We can only laugh at these ridiculous stories about #AlJazeera... They could have al least gotten our logo right pic.twitter.com/6oRrXPzxk8

Apart from blogging about it here:

Al Jazeera has also recently been the subject of a fake screen shot featuring a famous Bollywood film, which circulated on social media for a number of weeks, and decided to make light of this as well.

They were of course rebutting a claim made on a Facebook page  ["Dr. Subramanian Swamy fan page managed by ShankhNaad Team"],  which had gone viral on FB (the web cache of September 8 shows 12,925 shares and (3+21435=) 21,438 likes) and Twittter (where screenshots of this FB page were tweeted as pics).

The relevant photo has now of course gone missing on the FB page, but a Google cache is still available here (captured in a screenshot below—please click image to enlarge):

The FB post cited a link to a news story in Daily Bhaskar (the URL is still live at the time of writing, and a screen shot is also reproduced below):

"However, the image is authentic or not, cannot be said." (sic)

The Daily Bhaskar report in turn is based on a Tweet by one "Lotus bloom" @truth8090:

The above is of course from a cursory following of the various links backwards: what seems to have begun on Twitter on August 24 (at least in the above direct chain—of course, it is not known who is responsible for the obviously badly doctored image that was tweeted by @truth8090, and for all we know it may even have circulated earlier) was finally put to an end on Twitter itself: it seems to have gone from Twitter to a news websie to Facebook to Twitter, before being countered on Twitter itself

As some one pointed out to @truthbloom, the fake photo seems to have been doctored using this:

(That the tragedy had origins in farce finally becomes clear, belatedly, from the reference to @RealZaidHamid_ (a parody account) in addition to the earlier role played by the redoubtable @swamy39:

While Al Jazeera decided to make light of it, a small point still remains: "Lotus bloom" and  "Dr. Subramanian Swamy fan page managed by ShankhNaad Team" were only two of the disseminators of the image, and not everyone of the thousands who liked or shared or retweeted it or merely saw it would necessarily see this response and thus would perhaps remain convinced that the broadcaster is at the least guilty of unknowingly telecasting doctored images, even if it is not so ill-informed (or so brazen) that it does not know (or thinks its viewers would not know) about Jai and Viru, Sholay, or, indeed about Dharmendra or @SrBachchan and is merrily fooling people with Hindi movie shots. Which is perhaps what the rumour mongers rely on, and that is why one needs to wish more power to the likes of snopes.com—the definitive Internet reference source for urban legends, folklore, myths, rumors, and misinformation, or in this case a parody that was transmuted into a rumour, before finally being rebutted.