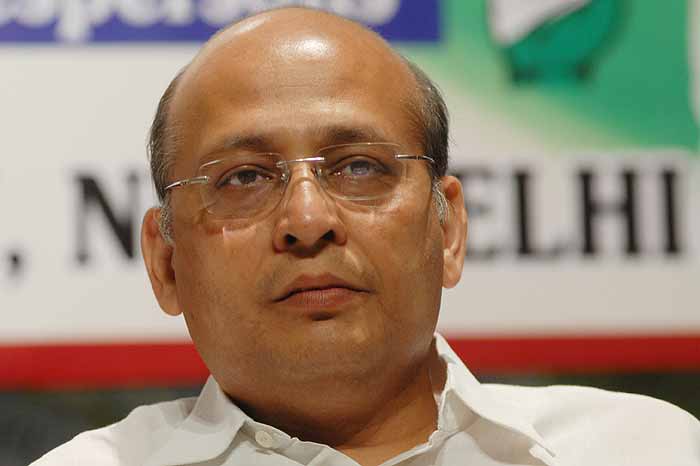 Despite the court injunction obtained by the senior Supreme Court lawyer's legal team, the controversial video -- or at least some portions of it -- have been circulating freely on the internet -- including on social networking sites such as YouTube, Facebook and Twitvid.

The only response from Mr Singhvi directly was to the news agency IANS which quoted him as saying:

"It is obvious that the adage 'be you the ever so high, law is above you' does not apply to any social media."

"Not only is there a court injunction, not only has the author of the alleged CD sworn in an affidavit in court and accepted that the contents were fabricated and morphed, but even as respectable a media group as India Today has accepted the position of the court."

"Obviously, an organised gang has been purposely used by motivated interests to concertedly use the social sites for sensationalism and permanent damage. Remember, this can happen to anyone and if this lawlessness is allowed to continue as it is, we will all be consumed shortly."

Sources in Mr Singhvi’s team confirm that despite their constant complaints to these online platforms asking for removal of the video, they could not prevent a 12:40 minute excerpt of the video going viral on Thursday and Friday, i.e. April 19 and April 20.

YouTube acted on complaints and the video was clearly removed many times on complaints but the video segment kept being uploaded using different accounts, not only on Youtube but also on Facebook and Twitvid.

This was followed up with two more excerpts being released today.

Singhvi and his former colleague Abhimanyu Bhandari had moved the Delhi High Court saying they had come to know about the controversial CD through some political leaders that a media house was in possession of the alleged CD.

They had alleged that the CD was "forged, concocted, morphed and fabricated". Any move to telecast the alleged CD would infringe the right to reputation of Singhvi, they had argued.

In response, the Delhi High Court in an order passed April 13 restrained the media group from disseminating the contents of the CD allegedly prepared by Singhvi's former driver:

Irreparable injury is likely to be caused to the reputation and goodwill of the plaintiff No.2 in case the defendants are not restrained from disseminating the information allegedly in their possession in the form of a CD.

Till the next date, the defendants, their agents and all others acting for and/or on their behalf are restrained from publishing, broadcasting, disseminating or distributing in any form or manner the contents of any alleged CD or any other material as described in the plaint in relation to the plaintiff No.2

The court had also sought response by May 21 from Aaj Tak, Headlines Today and India Today and Mukesh Kumar Lal, a former driver of Singhvi, the alleged mastermind behind the CD scandal.

Following the injunction, on Thursday, April 19, Singhvi and his former driver Lal told the court that they had "amicably settled the matter between them."

Justice Reva Khetrapal passed a consent decree in the civil suit after taking note of Lal's 6-page reply in which he was described by PTI as having apologised for sending "threatening SMSs" to the lawyer:

"...The CD was sent by me in a fit of rage and vengeance to demand it back as nobody has a right to those CDs. Firstly, the camera was used illegally and secondly, the CDs were doctored and morphed in such a manner so as to deliberately show plaintiff 2 (Singhvi) in a bad light."

Given the quality of the video, critics, without even the benefit of any lab analysis, scoff at the possibility that a clip running into this length could have been "forged, concocted, morphed and fabricated", leave alone it being undertaken by a Mr Singvi's driver. And even if the clip is genuine, unexplained questions about the equipment and logistics involved in recording them remain.

'Violative of the Injunction'

Abhimanyu Bhandari, an associate of Mr Singhvi and one of the plaintiffs in the case, insists that the permanent injunction applies to the social media as well. He was quoted by the Indian Express today as saying:

“There is a permanent injunction against the publication, broadcast, dissemination or distribution in any manner or form of the content. The dissemination of the fabricated videos of Dr Singhvi is violative of this injunction.”

Social networking sites meanwhile maintain that they remain committed to following their terms of service and take action against anything reported as violating it, but they point out that the court order needs to specifically mention the URL of the contested video or spell out its content for them to be able to take action.

Even then, they have been co-operating with the complaints, as evidenced by the fact that videos were removed from Youtube repeatedly on complaints received, but the problem remains in the multiple IDs used to upload the video.

Short of becoming like dictatorial like China and heavily censoring the internet or following Mr Kapil Sibal's "pre-censorship", it would seem that the law enforcement agencies are going to have their work cut out, which is why it is so important to ensure that the Internet Rules do not become suspectible to blatant misuse as happened recently in Calcutta.

Who's Behind the Video Leak?

Press reports had earlier cited the video being linked to a Facebook page belonging to a person identifying himself as ‘True Nationalist’.

Among others, Tejinder Pal Singh Bagga of the Delhi-based Bhagat Singh Kranti Sena (BSKS), who was also involved in the attack on lawyer Prashant Bhushan in his Supreme Court chamber in October 2011, was identified as one of the people behind ensuring that the video kept getting uploaded on various networking sites despite being removed repeatedly.

"I downloaded the video from YouTube Thursday and posted on Twitvid. It had been uploaded by someone named 'Singhvi' which was obviously a fake profile"

"I am not afraid of these people and they deserve this. I am prepared for any consequence"

For now, beyond the titillation, there is speculation on whether a dirty hand was involved in shining light on the sordid saga. Was it the dirty tricks department of the rival camp? Does this have anything to do with the top minister from the home state of the main protagonist? How about any over enthusiastic anti-graft crusaders given that one of the concerned parties headed a key Parliamentary standing committee? Or is it only, as has been reportedly claimed, a blackmail attempt gone wrong?

Interestingly, picking up from the above about the home state of the main protagonist, there were reports such as the following as recently as two weeks back:

While filing his nomination for Rajya Sabha elections, Congress spokesman Abhishek Manu Singhvi had also called for change of leadership in the State.

Before filing his Rajya Sabha nomination from Jaipur last month, in an informal chat with the media, Singhvi had said that Rajasthan was among those Congress-ruled State, where change in leadership was required keeping in view the approaching Assembly elections.

The remark of Singhvi assumed political significance because soon after Gopalgarh police firing in which ten Muslims were killed in September last, Congress circles were buzz with speculation that Gehlot has been given six months time to improve the performance of the Government.

Is the Video in Public Interest?

There had been some insinuation and rumours earlier that the video conversation shed light on possible misuse of authority and, at least, impropriety. Reacting to these, the BJP spokesperson Kirti Azad first said, “Issues that are floating around are very serious in nature. So I feel either Mr Singhvi or the court should let us know what the truth is all about.”

Given that Mr Singhvi is not just a powerful Congress spokesperson but also a Rajya Sabha member and Chairman of the Standing Committee on the Lokpal Bill as well as a powerful legal luminary, the interest in the alleged "sex CD" was understandably high, but the overall reaction from political parties, including the BJP, was restrained. As the TOI reported:

Asked whether the Opposition planned to refer the matter for scrutiny of a parliamentary panel, BJP spokesperson and Rajya Sabha MP Rajiv Pratap Rudy said, "there is some talk... if he has used his position for an act which is not acceptable... then it is serious matter."

Asked why BJP had remained silent on the issue, when Congress had made a political issue of the incident of BJP MLAs apparently watching pornographic material on their cellphones inside the Karnataka Assembly, Rudy said, "we are not the Congress party... we are a dignified party."

We have not seen the entire video and have only perused the three segments mentioned above that made their way to social networking sites. The audio in these segments is far from being clear, and we are not privy to the segments that may or not have been edited out of the excerpts released on social media, and as the site Legally India puts it:

Under the guise of sensible debate, saucy conversations are afire about whether the interaction was 'consensual'.

The real questions should instead be: Is it the public's right to be informed of what happened, or is it breach of privacy? Are public figures fair game or are we chasing a scandal in the salacious mould of Clinton-Lewinsky or Tiger Woods? What about a honey trap?

That it has not remained private is regrettable for the parties and their families. For the moment, there appears to be no public interest whatsoever in the fiasco.

There is absolutely nothing to suggest that what happened here was a quid pro quo. Rivals seem to be using the opportunity to suggest something larger without any evidence.

Legally India also offered some advice as a coda:

Unsolicited advice: If you haven't watched the video, don't worry. You're not missing much.

Meanwhile, social media is not only about prurience and salaciousness. There is the usual sense of fun and humour as well. For instance:

And a sampler of some of the buzz on Twitter:

'We Are Stuck With A Nut'