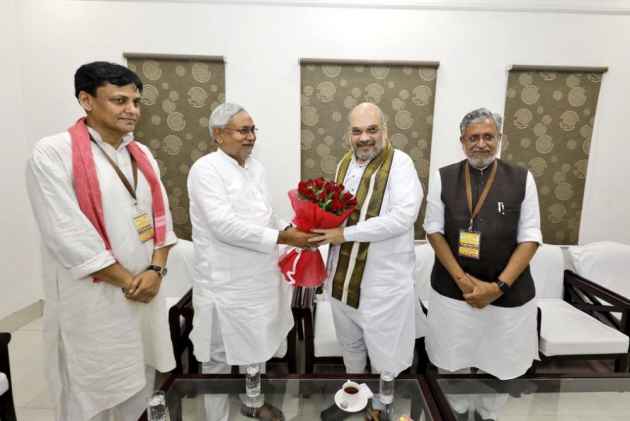 Smiles are back on the faces of the National Democratic Alliance (NDA) leaders following the eagerly awaited meeting between Bihar chief minister Nitish Kumar and Bharatiya Janata Party (BJP) president Amit Shah that took place in Patna on Thursday, but that has hardly dispersed the clouds of uncertainty hovering over the seat-sharing formula within the ruling alliance in Bihar.

With only ten months or so left for the next general elections, the NDA brass is up against the daunting task of addressing this issue to the satisfaction of all its constituents. In the 2014 parliamentary polls, the BJP had contested 30 out of the total 40 seats in Bihar, leaving seven and three seats for its allies, Ram Vilas Paswan’s Lok Janshakti Party (LJP) and Upendra Kushwaha’s Rashtriya Lok Samata Party (RLSP) respectively. Together, they went on to register a landslide victory, winning altogether 31 seats in the state.

But the return of Nitish’s Janata Dal-United to NDA since then has complicated the seat-sharing issue, changing the coalition dynamics completely. In June 2013, Nitish had snapped his 17-year-long ties with the BJP over projection of Narendra Modi as the prime ministerial candidate and subsequently gone into the parliamentary elections the next year in alliance with the CPI. His party, however, failed to win more than two seats in the state. Nitish, however, returned to NDA last year after walking out on the Mahagathbandhan (grand alliance) that he had formed with Rashtriya Janata Dal president Lalu Prasad and the Congress ahead of the 2015 state assembly elections, which they had won with a three-fourths majority.

It’s actually Nitish’s return to NDA after his fallout with RJD president over corruption charges against the latter's minister-sons, Tejashwi and Tej Pratap Yadav, that has turned seat-sharing into a thorny issue for the ruling alliance. Prior to Nitish’s departure from the NDA, JD-U used to be the dominant partner in the alliance and had always contested the polls along with the BJP on the 60:40 ratio in Bihar. In fact, Nitish had demanded and got as many as 25 out of the 40 seats in the 2010 general elections. There was no other party in the alliance in the state at the time but Nitish’s exit forced the saffron party to look for other allies. Finally, it stitched up a pre-poll alliance with the LJP and the RLSP in the run-up to the last general elections. Now, as Shah and Nitish begin the brain-storming seat-sharing talks, the BJP has to hit upon a formula that will keep all its alliance partners happy before the next polls. But then, that may not be an easy task.

With Nitish at the helm, the JD-U has been a major player in the alliance over the years and it cannot simply afford to let go of its dominant position. Some of its leaders have already started staking claim to 20-25 seats, but the BJP is in no position to accept such a demand. The JD-U is, after all, no longer its solitary partner in Bihar. It also has to suitably accommodate the LJP and the RLSP, which have nine MPs in the current Lok Sabha. These two allies will definitely press for what is known as the ‘sitting-getting’ formula during the talks to secure their nine seats.

But then, if the BJP agrees to set aside nine seats for them, it will be left with only 31 seats to share with the JD-U. Going by their previous 60:40 formula, the BJP will then have to give away 18 seats to Nitish and keep only 13 seats for itself. But how will BJP, which has 22 MPs from Bihar right now, rehabilitate the remaining nine? As things stand today, the party can only dispense with Patna Sahib MP Shatrughan Sinha and Darbhanga MP Kirti Azad who have sounded a bugle of revolt against the party leadership.

It, therefore, remains a moot point as to whether it will be a politically judicious move on part of the BJP to give up nine of its Lok Sabha seats to accommodate JD-U candidates. Since the next general elections are expected to be a keenly contested Modi-versus-the rest affair, each and every constituency matters for the BJP. How the BJP brass addresses the seat-sharing issue in the months to come is something that will put their political acumen to test in the run-up to its ambitious Mission 2019.