Painting Faces With Menstrual Blood Is No Women Empowerment

An Instagram photo of a woman with menstrual blood painted on her face garnered loads of attention, but what exactly was it intended to convey? 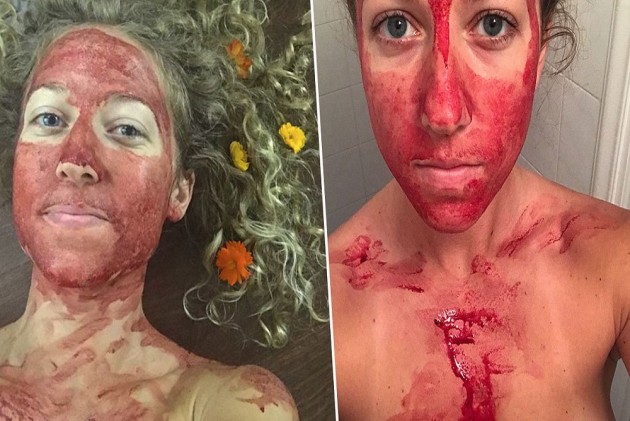 Thanks to films like ‘Padman’ and the Oscar-winning documentary ‘Period. End of Sentence’, more public discourse and awareness about menstruation and hygiene and even ads on sanitary napkins on prime time television, the monthly menstrual cycle of women has certainly come out of the closet in many ways, but smearing menstrual blood on the face could be going a bit too far to create awareness.

An Instagram photo of a woman with menstrual blood painted on her face garnered loads of attention, but what exactly was it intended to convey? I am a diehard feminist, but glorifying something that is distasteful and desperately going against the rule is not feminism to me. Personally, I feel this is quite an attention seeking move.

And this is certainly not the first time that some women have published photos of themselves on social media with their menstrual blood smeared on their faces. While a feminist from California posted online pictures of herself with her menstrual blood smeared on her face on February 28, garnering disgusted views and likes at the same time, last year a self-proclaimed 'blood witch' from Australia gave herself a facial using her own menstrual fluids to break the stigma surrounding periods.

“Sharing pictures of blood on my face and body was just an impulse – I was creating a series to help women connect with their menstrual cycle, and I thought it would be fun,”  Demetra Nyx wrote on Instagram.

“We hold so much shame in our bodies, and most of us do not realize it until we intentionally explore it. Our periods are an incredibly magical time of month that holds immense power, and our society keeps us away from that as much as possible …” she wrote.

A year ago Yazmina Jade collected the blood from her time of the month and painted it on to her face. “This was a sacred ritual to reconnect with my body. As women, we're deeply disconnected with our bodies because of societal shame,' Jade was quoted as saying.

'I decided to place the blood all over my face, and taste it to reclaim that part of myself. I could truly embody all that I was,” she said.

Menstruation has been written, weaved in poetries, and used in art over a long period of time. And the need to destroy the taboo surrounding it is needed. I am all in favour of menstruation and I don’t mind taking period leaves, if my pain is unbearable.  I also don’t mind if my skirt is stained accidentally. I am not one bit ashamed about it.

But my point is, do we celebrate or glorify menopause or for that matter PCOs, a condition that leads to a problem with women’s period cycle.  I don’t find any chest thumping feminist talking about it.

‘Period. End of Sentence’, a 26-minute documentary directed by Rayka Zehtabchi that won an Oscar, profiles women in Hapur district and how they set up a machine to make sanitary pads. The machine is the brainchild of Arunachalam Muruganantham, better known as “Pad Man”, on whom the Akshay Kumar starred film of the same name is based.

In 2017, an Indian-origin woman of Los Angeles overcame the psychological and physical discomfort of her period by running the London Marathon without any sanitary napkin or tampon.

Kiran Gandhi was in the final hours of preparation for her first London Marathon when she realised she was about to get her period. "I remember evaluating my options: a pad wouldn't really be ideal — chafing is a real issue on a marathon course, and no man I know would run would put cotton between his balls and run 26 miles," Gandhi told ABC.

“I didn't want to have to run with one and change during the marathon course — there's no privacy. So, in a radical act to prioritise my own comfort, I decided to bleed freely and run.”

Her decision to let her menstrual blood flow freely garnered international attention. But again I feel smearing menstruation blood on the face has got nothing to do with women empowerment. You may label me as old school, out-dated; mother hen ­— the choice is completely yours.