Tamil Nadu villagers have a love-hate relationship with this tusker 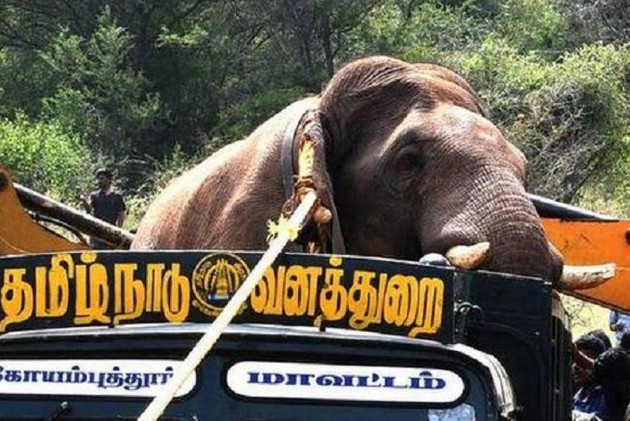 “Chinna Thambi” in Tamil means little brother. But this Chinna Thambi is a big fellow – an elephant who would welcome himself uninvited to lunch and dinner in crop rich fields and homes near Coimbatore. Though the people of the area complained loudly about the losses they suffer due to his raids they actually started to miss him when he got translocated by the forest department.

“Only after he was gone we realised how much we had actually grown fond of him. And a consensus is evolving that he should return his natural home since we humans are the interlopers,” pointed out Dinesh, a college student near Pollachi. The villagers started to miss the looming presence of the male tusker they had so gotten used to.

“Yes he was being a nuisance, even putting his trunk through the thatched roof and sucking out the cooked rice from the vessel, or eating the plantain and sugarcane crop waiting to be harvested. But once he had his fill he would return to the woods bordering the fields. And he never attacked humans or vehicles unlike other male tushers used to,” said Bhavani a villager in the Thadagam area of Coimbatore district. The villagers also believed that in spite of the damage he caused Chinna Thambi was lucky mascot who ensured good rains and a bountiful harvest.

While the villagers wanted the pachyderm to be fed properly by the forest department to reduce his raids, the forest officials decided to relocate him to the Topslip forest area in Valparai. So Chinna Thambi was tranquilised, loaded into a truck and driven hundred kms to the Valparai forest and released there.

As the images of the tusker being pushed and prodded by a ‘kumki’ elephant (trained to tame wild elephants) came in, there were loud protests and a save Chinna Thambi campaign gained ground on the social media. Some officials even said they would try to train Chinna Thambi to be a ‘kumki’, which means he will be in captivity. But the jumbo had other ideas. Now fitted with a radio collar, he also started missing his familiar roaming ground. He slowly started descending the slopes of the Western Ghats and reached villages near Pollachi, close to its original territory where his herd roams.

But experts say that authorities cannot always function at the whims and fancies of public opinion. “When the elephants enter villages they are seen as disruptors and attackers destroying precious crop and endangering lives. But when the forest department acts on the complaints of villagers and translocates the animal, the same villagers protest against the move," pointed out C.R. Jayaprakash, the head of journalism department in PSG College of Arts and Sciences, Coimbatore, who has studied human-animal conflict.

He also recalled how another jumbo in the region, Madukkarai Maharaj, had died of fractures to its head when it tried to break free from its cage in Annamalai. “He too was called a crop raider and when attempting to translocate it, we lost the animal,” he said. So public demand is too fickle and a long term solution needs to be found in consultation with animal experts, he added.

Meanwhile Chinna Thambi is slowly finding his way back to his familiar territory and it remains to be seen how the villagers would respond once he returns to being their uninvited guest.