A Familiar Tale, But Not Just Another Test Series - Brave Windies Undone By English Riches 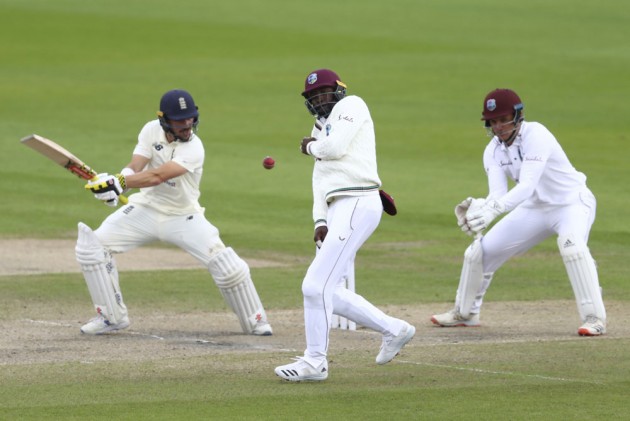 With the series locked at 1-1, England dropped a batsman and picked an extra fast bowler for the third Test because Ben Stokes would not be bowling in this match, also with Zak Crawley and Sam Curran making way for Joffra Archer and Jimmy Anderson. The West Indies dropped Alazarri Joseph and brought in an extra spinner in Rakhim Cornwall.

West Indies won the toss and put England in again in overcast conditions, who made yet another poor start with Sibley going for a duck to the last ball of the first over to Kemar Roach. LBW to a ball that came back into him, missing the line as he closed his bat face too early trying to work it on to the onside.

Gabriel went off the field after the second ball of his 4th over and West Indies looked in trouble, with a pacer less in their line-up. He was back soon however and seemed much his usual self, banging in a few bouncers at 90 mph to Rory Burns. England went to Lunch at an uneasy 66 for 2. They were in need of a partnership, but skipper Joe Root ran out needlessly for 17 just when he was starting to settle down.

In what seemed a perfectly executed dismissal immediately after Lunch, Roach prised out Stokes, unsettling him initially with two sharp incoming bouncers, one of which actually hit him on the helmet, followed by the classic full-length delivery that came back in sharply and breached his forward defensive shot through bat and pad. West Indies had got rid of both of England’s biggest batting hopes cheaply, leaving them stuttering at 92 for 3.

Burns meanwhile had got to his first 50 of the series, but threw away his wicket yet again, cutting off-spinner Roston Chase too close to his body. Cornwall took a great one-handed reflex catch at slip. At 122 for 4, with the top order gone, England looked in trouble and desperately in need of a big partnership. Jos Butler and Ollie Pope, both under pressure to keep their respective Test places, were in together. Pope, particularly, with no runs behind him in the series. To his credit, however, he batted positively playing his shots and reached his 50 with a beautiful cover drive. Right from the beginning, he was getting in a big and confident stride forward, much like Stokes in the first two Test matches.

At the other end, Buttler broke free with two sixes off Cornwall in the same over as the momentum of the innings started to shift towards England and they ended the day at a comfortable 258 for 4 with the partnership worth a promising 166. Pope was into the nineties and Buttler on 56 – both batsmen having successfully fought off their individual challenges to take England to safety from a potentially precarious situation.

In a throwback to the first Test, England started badly next morning losing four quick wickets for 18 runs in the first hour to slump to 276 for 8, with Pope failing to add to his overnight 91. For the second time in the series, the West Indian fast bowlers had brought their side right back into the game, and a sub-300 total looking a distinct possibility.

In a fascinating seesawing of fortunes, however, the game unexpectedly swung back England’s way at this point as Stuart Broad continued his stirring comeback by playing a carefree knock of 62 at No.10. His 13th Test fifty for England off just 45 balls couldn’t have come at a better. His 9th wicket partnership with Dom Bess yielded 76 priceless runs and put England back in control again, with the innings finally ending at a very healthy 369.

In yet another nightmarish start, West Indies lost Kraigg Brathwaite to the 9th ball of their innings as an incoming Broad delivery trapping him in front. A couple of overs later Stokes dropped a regulation waist-high slip catch from John Campbell at second slip, prompting the commentators to say that it only proved that he was human after all!

West Indies lost their second wicket at 44 when Archer got a brutish delivery to lift off the pitch against Campbell, who could only fend it off his ribs to Burns at gully. James Anderson, who had been wicketless up to this point, suddenly struck twice on either side of Tea –moving the ball in to take a fine inner edge from Shamarh Brooks after he had got rid of Shai Hope earlier with a delivery that moved the other way. Visitors playing back or straddling the crease, to balls that they could have played forward to, negating the movement off the pitch. West Indies were truly struggling at 59 for 4 with the top order gone.

After an uncharacteristically watchful start, Jermaine Blackwood had just started opening out when England set a leg trap for him and Archer repeatedly bounced at him with a short leg, leg slip, midwicket, square leg, and fine leg – all waiting for the miscued shot. But it was Chris Woakes who produced the big in cutter this time, bowling Blackwood through the gate. The West Indies batting had let them down again.

They started well enough next morning and the first hour again belonged to the West Indies, who were coasting along at 178 for 6, with the 7th wicket partnership between skipper Holder and Shane Dowrich worth 68. But Broad wasn’t done yet with his reply to the England selectors and brought one back in sharply to trap Holder LBW, for a well-made 46. He then ran through the tail to finish with fantastic figures of 6 for 31. In another impressive bowling performance, the England seamers had scuttled the Windies innings for less than 200, a second time in a row. Such had been their dominance that the spinner Bess had not needed to bowl at all.

As a contest, the match was effectively over at this point and hereafter, it was England all the way.

England began their second innings in style as openers Sibley and Burns put on a century partnership, with both getting fifties. Sibley’s departure made way for Root who had been short of runs in his last two innings. With star bowler Gabriel off the field after bowling just five overs in the innings, Burns and Root made merry and England skipper raced away to a quickfire 68 not out, off just 56 balls. Burns at the other end compiled a well-made 90, his second fifty of the match, setting up an England declaration that left the West Indies a target of 399 and more importantly, six overs to play out before the close of play.

Broad, in a hurry to get to 500 Test wickets, got the third ball of his first over to leave Campbell just enough to take a thick outside edge en route to the safe hands of Root at slip and West Indies were a familiar 0 for 1 again. Worse was to follow as Broad picked up wicket number 499 with one which moved away from night-watchman Roach – the outside edge this time flying to the keeper, and it left the West Indies staring down the barrel at 10 for 2.

Even the loss of one full day due to rain didn’t really help the West Indies’ cause of saving the game; and the batting discipline that had helped them win the opener never really showed up again. It was a disappointing procession to the pavilion yet again as their second innings disintegrated. It was just a question of whether England would get the remaining wickets in time before the skies opened up again. Woakes, moving the ball in beautifully, ensured just that. He got three LBWs in his fifer, before Man of the Match Broad returned to take the last West Indies wicket. He also completed a 10 wicket haul in a match that saw him pass 500 Test Wickets, watched proudly by his dad, former England opener Chris Broad, the Match Referee for this Test match.

West Indies crumbled for 129, losing by a massive 269 runs. If it had been Stokes’ Test in the previous game, it was Broad’s match this time. Yet, the victory margin did not really reflect how close the game had been for the most part, till England pulled away, and how fortunes had seesawed fascinatingly, throughout the series.

The bat has been raised, the knee taken and the series which commenced with the courageous arrival of the West Indies team in the United Kingdom at the height of the coronavirus pandemic, with sport still largely on hold worldwide, is now history. But for their batting failures in the last two Test matches, there may have been a very different story to tell, of a landmark series which saw the resumption of international cricket and a revival of hope in the continuity of normal human life. And for just that, both teams and the men behind the scenes who made it happen will forever have the gratitude of the entire cricketing world.