Pakistan will have figured out the mistakes they committed at Manchester. England will be super confident 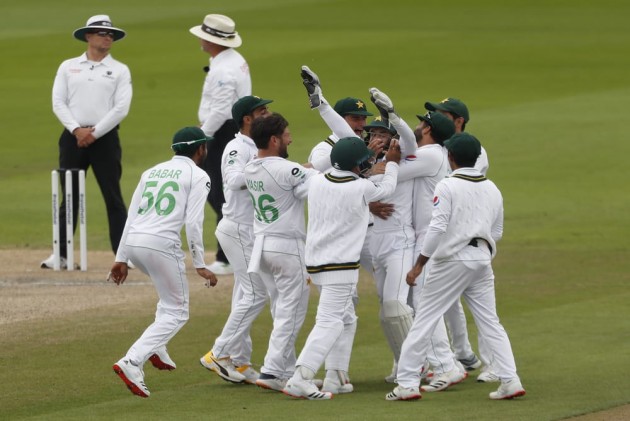 Cricket, particularly in its longest format, is a very mental game. It gives you a long time to churn things over in your mind, to mull and brood over dropped catches and poor shots that got you out, over bouncers that rattled you or spin that tormented you. It gives you plenty of time to beat and berate yourself mentally, as you watch others do well, often from the confines of the pavilion, wondering whether you will ever hold a bat the right way again or get your game together. No other game gives you so much time to dwell on such things.

In that sense this game calls for mental strength like no other and that is the prime reason why it is so heartening to see fairy tales come to life, as players overcome their own private torment and personal insecurities and find a way back to the top of their games.

That is why a talented all-rounder (Chris Woakes) won the hearts of the cricketing world the other day; someone who had spent the greater part of his international career in the shadows of more celebrated colleagues. And it was no less than a fairy tale that someone who was averaging 6.60 with the bat in his last 10 Test Innings, suddenly stepped up to play a match-winning knock of 84 not out on a crumbling fourth innings wicket.

Partnered at the other end by a wicketkeeper (Jos Buttler) who has had an equally terrible time behind the stumps of late, who redeemed himself with an equally marvellous knock, as the two combined in one of the most iconic sixth wicket partnerships in Test match history.

Together they ensured that England managed to break the jinx of losing the first Test of a home series yet again, as Pakistan handed them an escape route after holding the match in a vice-like grip for the most part. The home team should now emerge stronger as the series progresses, a fact that they have demonstrated in the past. In both the 2016 and 2018 series, England had lost the first Test to Pakistan but had gone on to win the second Test emphatically.

Most importantly, England now have a new-found belief that they can chase down anything and come back from impossible situations. They would be looking at picking up an unassailable 2-0 lead at Southampton, to seal off a second successive series win at home.

England’s batting however, has so far come good only in bits and pieces this summer with large sections of their top order often falling cheaply, dependant heavily on rear-guard rescue acts mounted by a few players who have shone individually at different times. Much like the fabled ‘Few’ RAF pilots who almost single-handedly prevented an invasion of their island in the Battle of Britain, 80 years ago.

Collectively, as a batting unit however, England have looked far from convincing and there is always the possibility that the ‘fairy tale’ rear-guard action may not happen every time. Pakistan would be counting on that factor, as they look to redeem themselves in the second Test and restore level terms in the series at the Ageas Bowl. 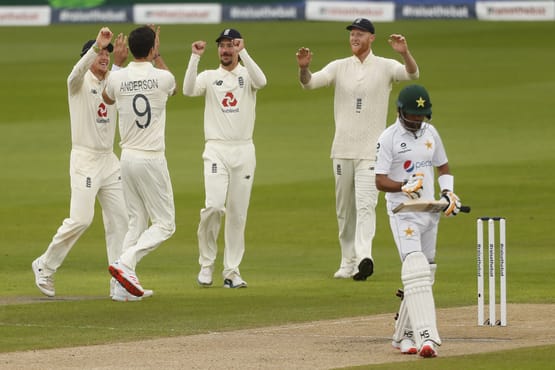 James Anderson celebrates with teammates the dismissal of Babar Azam during the second day of the first cricket Test match between England and Pakistan at Old Trafford. Credit: AP

Unpredictable as ever, Pakistan threw away a match that was theirs for the most part through a combination of inexperience, indisciplined batting and some tactical errors in the field. After their first innings performance, they could have so easily batted England out of the game with their lead of 107. One good partnership would have done that. But they failed to produce it and self -destructed, throwing away their batting plan out of the window.

Even after setting England a reasonably difficult fourth innings target of 277 on a wearing wicket and having them on the ropes at 117 for 5, Pakistan let the match slip, crucially holding back their most dangerous spinner, when he should have been at the England batsmen’s throats relentlessly.

Instead, they allowed a historic sixth-wicket partnership to blossom and seemed to have given up much before the proverbial ‘last ball of the match’, when just one more wicket could have potentially turned things around dramatically. By the time Yasir Shah actually produced the last two breakthroughs, it was too late. Had they come 50 runs earlier there might have been a very different story to tell.

The Old Trafford defeat would have hurt Pakistan’s pride and they now need to hold their nerve and show the world what they can do. They have had enough time to lick their wounds, dwell on what went wrong and would want to come roaring back for the fresh battles ahead. 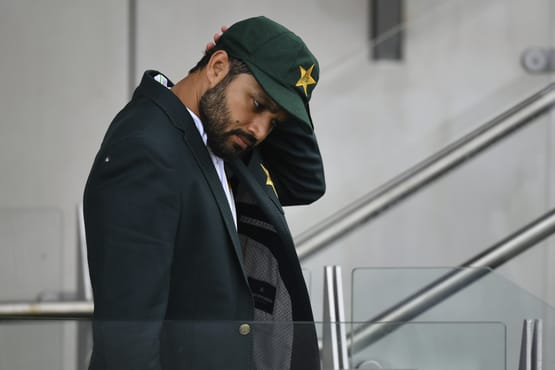 Azhar Ali walks out for toss on the first day of the first cricket Test match between England and Pakistan at Old Trafford. Credit: AP

The real test of Azhar Ali’s captaincy will now be in how well he is able to rally his team for the next game. But then Pakistan have a long history of coming back from horrific starts to win tournaments and it would be fascinating to watch if they can produce one of their Houdini acts again.

Pakistan took away plenty of positives from Manchester, where they had their adversary on the ropes time and again, but failed to deliver the knockout punch. The added advantage of Ben Stokes’ absence now gives them an unexpected boost to level the series.

Pakistan’s exciting multi-pronged attack challenges batsmen through pace and movement from different angles combined with quality wrist-spin, and has the wherewithal to cause the catastrophic collapse that England have been threatening to have, right through the summer.

Whatever they have lacked in experience has been made up by the collective aggression that Pakistan sides have been traditionally known for, displayed right throughout a wonderful opening Test that was lost and won, over one topsy-turvy day, over one spectacular session that turned the match on its head.

For now, the cricketing world holds its collective breath and waits to see if the cornered tigers fight back with the vengeance they are capable of!