The England vs Pakistan Test series will be an enchanting one. Fast bowlers could well define its course and Pakistan have enough in their tank 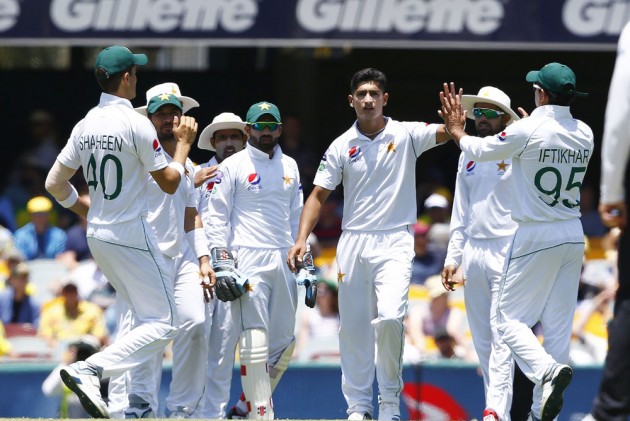 Pakistan have always had some of the most exciting, and mercurial players in their ranks who have over the years produced moments of sheer magic, with both bat and ball, across all formats of the game. They have also managed to leave plenty of controversy in their wake. (More Cricket Stories)

While Pakistan have showcased some of the most elegant batsmen of the world, their explosive strength has always been in their bowling attacks, packed with lethal quicks and wily spinners who gave no respite to the opposition. On their day, they could annihilate any batting line up for next to nothing.

Pakistan have also had the happy knack of regularly discovering raw talent who could work up express pace, swing the ball superbly and bowl toe crushing yorkers. One has to only think of a Waqar Younis or a Wasim Akram or of Shoaib Akhtar’s sheer pace, to conjure up the image of the typical Pakistani fast bowler.

It is an image curated by the legendary Imran Khan who, along with his pace and swing generated from a beautiful run up and bowling action, was also one of the first exponents of controlled reverse swing, making him completely unplayable at times. As Sunil Gavaskar’s Indian side of 1982 would ruefully testify.

India were coasting along at a comfortable 102 for 1 in the second Test in Karachi when Imran returned for a spell with the old ball. Before they knew what hit them, the scoreboard read 114 for 7 in what was perhaps, one of the first and most lethal displays of reverse swing in a Test Match. Imran finished with figures of 8 for 60 that day, with seven of his victims being bowled or trapped lbw. 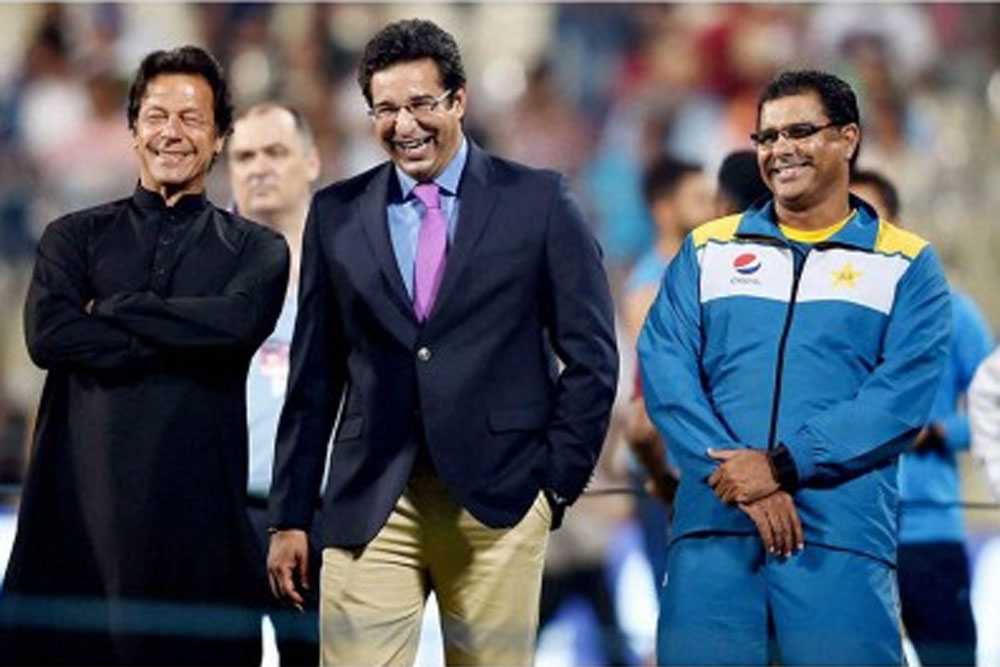 The legends having a laugh (Imran Khan, Wasim Akram and Waqar Younis)

Having said that, however, it would perhaps only be right to credit the origin of reverse swing to another Pakistani fast bowler, Sarfaraz Nawaz who taught it to Imran and this skill later proved to be the lynchpin on which many great Pakistani fast bowling careers were launched. Today, almost all teams have fast bowlers who can reverse the ball with telling effect, but it all started from Pakistan in a legacy that endures to this day.

Saliva or no saliva

With the use of saliva banned by the ICC for now, the reverse swinging old ball may no longer be a decisive factor at this time, but even without it these bowlers were perfectly capable of asking batsmen a number of other embarrassing questions.

READ: Broad And Anderson 'The Greatest That's Ever Been' – Morgan

Pakistani fast bowlers have traditionally hunted in pairs over the years, starting with Imran and Sarfaraz, Imran and Wasim, Wasim and Waqar, Waqar and Shoaib, Mohammad Asif and Mohammad Amir. The last two unfortunately losing their way in unsavoury controversies, that cut short promising careers which should have put them right up there with the best, in terms of ability and expertise.

These bowlers have always had the able support of the likes of Umar Gul and Aqeeb Javed, and it’s truly amazing how regularly one country has produced so many great fast bowlers, one after the other.

Living up to that lineage in the present Pakistan team in England, are two very exciting young fast bowlers, Naseem Shah and Shaheen Afridi who could also, very easily be right at home in that exalted company in a few years' time. 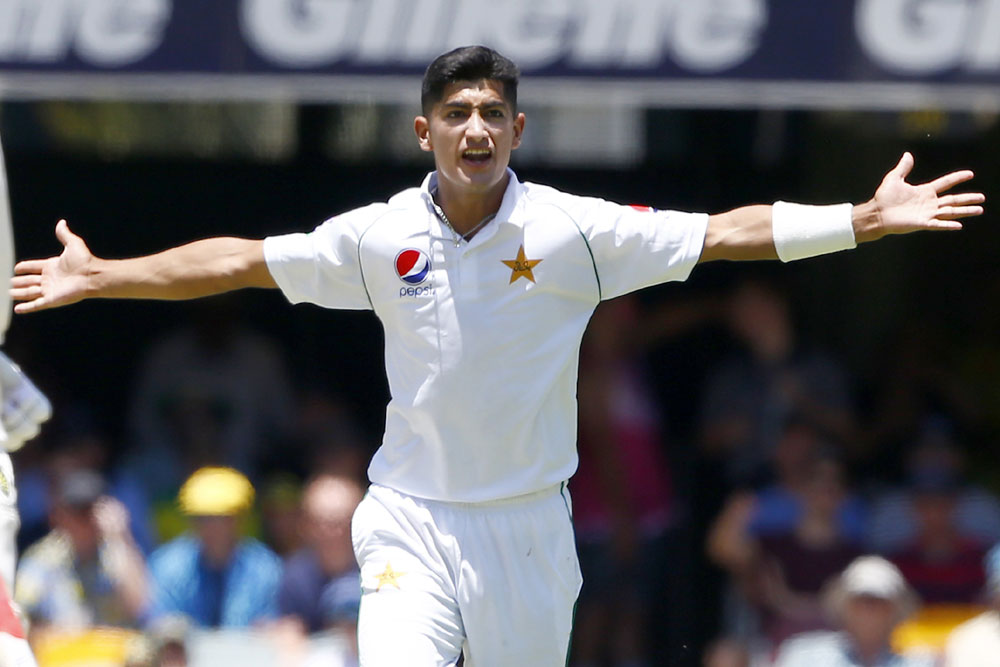 Naseem Shah: A star in the making

Naseem, the latest to come off the Pakistan fast bowling assembly line, has been very impressive in his short career. He has a lovely action with pace to match. Making his Test debut at just 16, his average speed during the Tests against Australia was 143.06 Kph, the fastest for any bowler. He quickly became the youngest pace bowler ever to take a Test five-wicket haul and a few months later, the youngest to take a Test match hat -trick, achieving this feat against Bangladesh.

In the last Pakistan Super League, Naseem Shah bowled 80 per cent of his deliveries at over 140 kph which means there won’t be a lot of respite from relentless pace for batsmen when he is bowling. However, in England, where lateral movement is a more potent weapon than sheer pace, this may not turn out be such a threat, as Messrs Archer and Wood recently discovered in the West Indies series.

Naseem, when paired with the left-armer Shaheen Afridi, who had such a wonderful World Cup last year, could easily become the new Wasim Akram-Waqar Younis combine for Pakistan. Together with Mohammad Abbas or Sohail Khan, who can both prove to be a handful in English conditions, they could really pose a threat to English batsmen. With Yasir Shah, the leg-spinner operating at the other end, they could easily leave a batting order in disarray. And If that happens often enough, Pakistan could be potentially looking at winning Test matches.

The flip side, however, remains their inexperience, Naseem is 17 and Shaheen 20, which could mean that achieving the desired consistency over a long Test Match innings might be a problem. But that is something that remains to be seen. There is also the COVID 19 era problem of playing three back to back Test Matches with an unchanged pace attack, which could lead to the fatigue and injuries that we saw in the West Indies pacers. 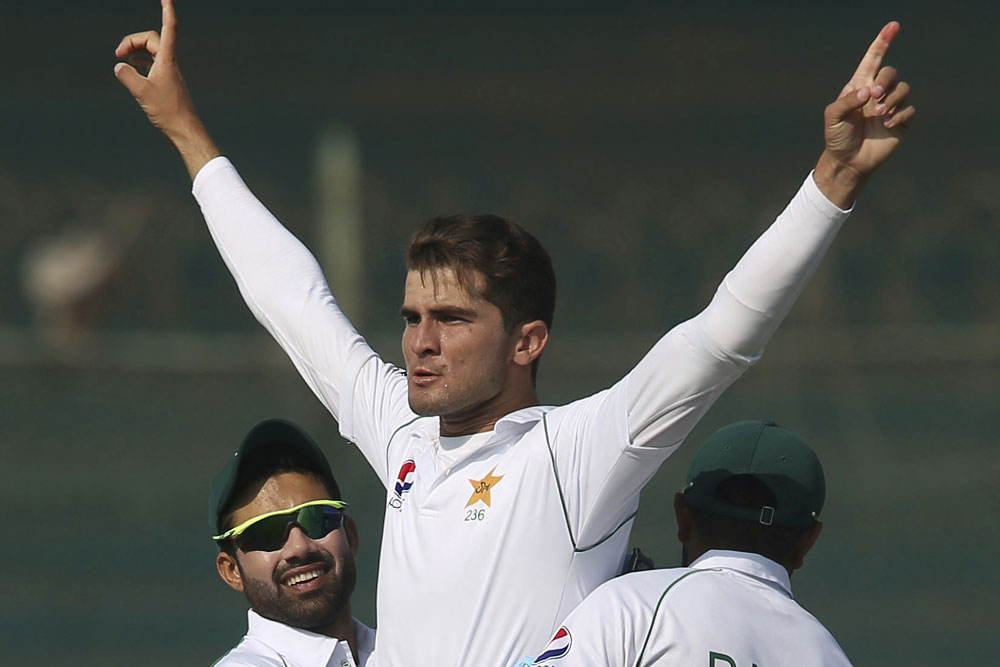 With 29 players in their touring party, Pakistan have a lot of pace bowling options to choose from. In a short series, however, there is not much scope for experimentation and coach Misbah-ul-Haq would definitely like to go in with his best attack at all times.

Pakistan have some very talented players at the core of their batting line up – players like Azhar Ali, Babar Azam, Sarfaraz Ahmed and Asad Shafiq who can all change the course of a Test Match on their day. Babar Azam obviously remains their best batsman and his experience with Somerset, coupled with his performance in the World Cup last year means that he would be the cornerstone of the Pakistan batting in this series. His elevation to the T20 captaincy last year has only added to his stature in the team. The others would also be keen to prove themselves in this landmark series.

Their young opener Abid Ali recently created history by becoming the first cricketer to hit centuries on both ODI and Test debut last year. With a current Test average of 107 after three matches, he too, would be looking at showcasing his talent in the toughest conditions that he has so far encountered in his brief international career.

Overall, the Pakistan batting definitely looks to have more depth and solidity than the West Indies. The question however is, can they get enough runs, can they make those big hundreds that shape Test matches, especially in the first innings? Will someone step up, like a Zaheer Abbas, or a Javed Miandad, or a Younus Khan have, in the past? If they can, England will have a real fight on their hands.

Lessons from the West Indies tour

Pakistan would do well to look at the areas where the West Indies went wrong in the last series. The England seamers will again be looking to bowl up and try to bring the ball back in sharply, using the lateral movement off the pitch.

This strategy had paid rich dividends against the West Indies batsmen who failed to get fully forward and were repeatedly bowled or trapped LBW halfway, straddling the crease. Pakistan should be prepared to counter this by getting in a big stride forward, covering the stumps and negating the lateral movement, something that Ollie Pope did so well in his innings of 91 in the Third Test. Interestingly, Pope had himself fallen to this technical flaw in both innings of the first Test.

Also, unlike the West Indies, Pakistan should not, put England in after winning the toss, unless absolutely necessary. The ploy backfired twice in both the Test Matches that England won and can easily happen again. The sensible thing would be to bat first as far as possible, put 350 plus on the Board and then put England under pressure, picking up early wickets and not letting them recover from there. The Pakistan bowling attack has the wherewithal to do this.

This then, would be the general gameplan for both sides and while England have already executed it successfully twice in the last two Test Matches and have the huge advantage of being well into their Test match rhythm, physically and mentally, Pakistan will be making a fresh start after a long layoff from international cricket and could come out a little rusty in the first Test. England, with their history of poor starts in home series may, however, give them a window of opportunity which Pakistan would do well to grab.

They have been in England for six weeks now and with a young, enthusiastic outfit that is ready and raring to go, it promises to be a fascinating battle ahead.