Of Demons And Wrong Cues - How Imagined Terror Wreaked Havoc

After an elaborate inauguration, the Narendra Modi Stadium in Ahmedabad unwittingly hosted a Test match that lasted two days 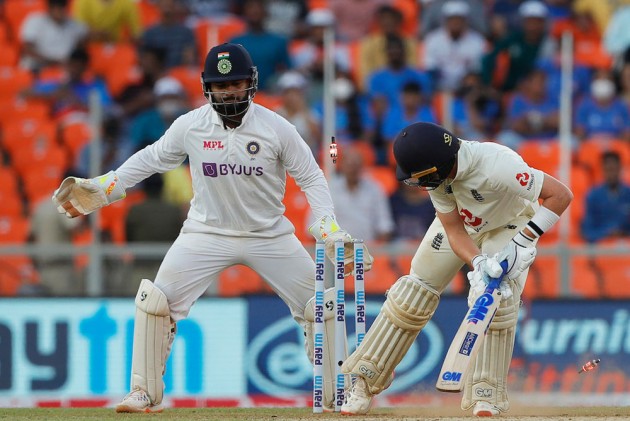 Yet another Day-Night Test match has ended in less than two days -- something that’s happened twice earlier. What’s not happened till now is that it is the spinners who took almost all the wickets. Amazingly, 28 of the 30 wickets that fell at Motera were taken by the spinners, and pacers Ishant Sharma in his 100th Test for India and Jofra Archer picked a solitary wicket each.

All the talk of fast bowlers holding a decisive advantage with the pink ball, specially in the twilight hour under lights, of the extra grass on the pitch to protecting the shine... of both sides having rested their premier fast bowlers to keep them fresh for this day-night game and Messrs Archer, Anderson and Broad "licking their lips" after bowling in the nets... all came to nought as the drama that unfolded over the two days of the match redefined how Day-Night Tests would be looked at henceforth, at least in this part of the world.

But the battle was mostly in the mind; and more than what the ball did, it was what it did not do that led to the spectacular batting collapses. Much like ‘the curious incident of the dog that did nothing in the night time’ in the celebrated Sherlock Holmes tale, batsman after English batsman watched mesmerised, as Indian spinners darted the ball into their pads or knocked over their stumps, while they waited for it to turn. They kept playing the wrong line.

As many as 21 of the 28 wickets that fell to spinners actually went to straight balls, with batsmen playing for the turn. Time and again, the naggingly accurate Axar Patel who picked up 11 wickets in the match, went wide off the crease and brought the ball back in with the arm, at pace, rocketing it into the pads or into the stumps. He did it with such regularity that Rishabh Pant from behind the stumps started calling him 'Wasim Bhai,' in a reference to the legendary Wasim Akram’s toe crushing in-swinging yorkers, brought in similarly with the arm, years ago.

That the scars of the second Test at Chennai indeed ran deep was obvious as batsman after batsman played tentative, uncertain half prods, instead of trying to play the ball off the wicket, or getting to the pitch to knock the bowlers off their length. It was as if they were mesmerised by a show of the Great Indian Rope Trick on the pitch.

The ones who backed themselves and played positively, Zak Crawley in the England first innings and Rohit Sharma in both innings for India, flourished and while they were batting, the wicket seemed to hold few terrors. Rohit’s innings once again was the cornerstone of the Indian batting and like the one at Chennai, helped the hosts take the match away from England. He looked untroubled by any demons in the pitch, imagined or otherwise, as the opener played his shots and dominated the bowling.

This positive approach was sadly missing in most of the other batsmen, particularly the Englishmen, who meekly allowed themselves to be dominated by the bowlers and by the fear of unplayable spin that never actually materialised. Instead, wickets fell with predictable regularity to deliveries that straightened and batsmen departed in a forlorn procession that left the match a literal no contest.

This continued in the England second innings, even after the visiting spinners had spectacularly wrested back the initiative from India as they collapsed from 113 for 3 to 145 all out with Joe Root picking up a stunning 5 for 8. It sure surprised him as much as anyone else! But even when that was happening, there was a sense of foreboding of yet another impending England batting collapse.

And sure enough, the slide began as soon as the England second innings commenced, with Axar Patel picking up two wickets with the first three balls of the first over, barely missing out on a well-deserved hat trick as Crawley and Jonny Bairstow looked completely out of their depth, perishing to straight balls.

Clearly, England need to improve -- first and foremost in their mental approach to playing spin, although the Indian batsmen barring Rohit and to an extent Virat Kohli himself, were surprisingly tentative too. It’s time to exhibit more self-belief as they try to work out solutions to constantly changing situations, thinking on their feet and adapting quickly, instead of blaming the wicket. That is the least that can be expected of International cricketers who play at the highest level of the game.

There will be the usual trashing of the wicket, but the demons, such as they were, were in the minds of the batsmen mostly. The 21 wickets that fell to straight balls bear adequate testimony to that. The odd ball turned sharply, but generally, it was poor batting, and a lack of application, as Kohli said at the presentation ceremony, that let the batsmen down.

So the Test match is done, in less than two days, and the glittering milestones have been duly reached -- Ishant’s 100th Test and Ashwin’s 400 Test wickets, the second-fastest bowler in history. The off-spinner has carved a place for himself amongst the all-time greats of the game and looks destined for greater glory in the years ahead. And India are one step away from qualifying for the ICC World Test Championship final against New Zealand. They just need to avoid a loss in the next Test match.

It is unlikely that the basic nature of the wicket will undergo any substantial change in the next Test match starting in just under a week’s time, although it will be a new strip. And the Indian spin twins will be impatiently waiting to get at the hapless England batsman again in the last Test match of the series.

Conditions in this part of the world will always aid turn, just as the ones in England will aid swing and seam and the ones Down Under will facilitate head high bounce and carry, while New Zealand will always be cold and windy. These are conditions that International cricketers must expect and adjust to, and perform. What is needed is mental strength, patience and discipline, to wait out the difficult overs and be prepared to concentrate over long periods, playing the ball on merits, off the wicket. And not be spooked by the odd turning ball that kicks up a cloud of dust.

England batsmen have done that successfully on past tours. It’s time the present side made that mental adjustment too. And the sooner the better.

A Test match at the biggest stadium in the world, refurbished over the past seven years, getting over in less than two days is definitely not a great advertisement for the game. One sincerely hopes that it doesn’t happen again, but the onus is on the players to ensure that, more than anyone else. Yes, this was definitely not the best of Test match wickets, but more application and commitment on the part of the batsmen would have certainly made for a better contest that would have gone the distance.

Hopefully, that change will come about in the next Test match with the players using the extra days available to them to try out different things at the nets as they head back to the drawing board once again.