Minus Virat Kohli and Mohammad Shami, the Indian cricket team will have a mountain to climb against a torrid Australian pace attack in hostile conditions 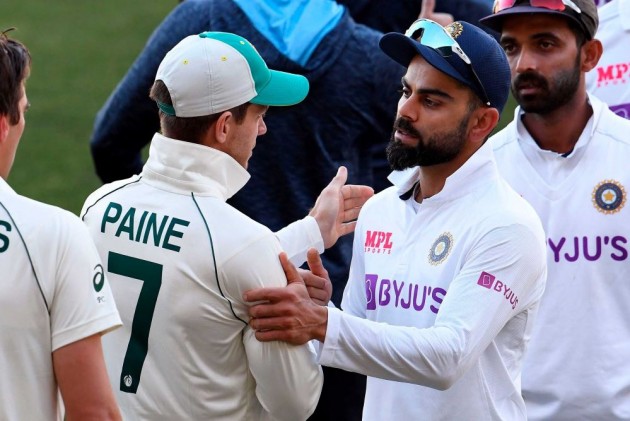 Exactly four years to the day after India recorded their highest ever Test score of 759 against England at Chennai riding a triple century by Karun Nair, they crashed to the depths of their lowest ever score without a single batsman reaching double figures, as yet another Pink Ball Test match ended in less than three days. When play commenced on the third morning of the first Test in Adelaide, India looked to be in the driver’s seat with a 53-run first innings lead. Their batsmen had played reasonably well in the first innings and even more hearteningly, the bowlers had cut through the Australian top order with ease, reducing them to 111 for 7 at one stage. It was time to consolidate and set up what would be a hugely uplifting victory. (FULL SCORECARD)

A seed from Hazlewood with his first ball of the day!


An unbelievable one and a half hours later, a dazed India had been blown away by a brilliant bowling and catching performance by the Aussies, as an entire innings folded up for a humiliating 36 runs with Josh Hazlewood returning dream figures of five for 8 and Pat Cummins picking up four for 21. The Indian batsmen looked completely unequipped to handle a wicket that seemed to have quickened up overnight and was offering the pacers a significant amount of extra bounce and movement.


One of the TV commentators remarked that it seemed ‘Christmas had come early for the Australians’ as they engineered one of the most brutal turnarounds in the history of Test cricket in a wildfire first session of play to crush the visitors by eight wickets. At one stage, India lost four wickets without scoring a run as the rampaging quicks looked simply unplayable. India had reaped the whirlwind.
It all started when Cummins removed nightwatchman Jasprit Bumrah in the second over of the day and then struck a huge blow by finding the outside edge of the ever-reliable Cheteshwar Pujara’s bat for a duck. Things unravelled from there in quick time.

BASICS FORGOTTEN
Coming on as first change, Josh Hazlewood had Mayank Agarwal caught behind with his first ball of the innings and Ajinkya Rahane for a duck with his fifth. The nightmare continued when Virat Kohli fell to Cummins, spectacularly caught by a diving Cameron Green at gully. It was a period in which India lost five wickets for four runs in 5.5 overs.

Virat Kohli is run out after a mix up with Ajinkya Rahane! @hcltech | #AUSvIND pic.twitter.com/YdQdMrMtPh


Hazlewood then knocked over Wriddhiman Saha and Ravichandran Ashwin in successive deliveries balls. He missed out on the hat-trick but duly completed his five-wicket haul in the next over, finding Hunuma Vihari’s outside edge as India plummeted to the depths of its lowest ever Test match total.
Looking at the way India batted, there appeared to be an alarming erosion of the basic batting techniques drilled into every young cricketer, of getting to the pitch of the ball and playing close to the body, keeping the head down and leaving balls outside the off stump. Instead, there was a lot of indeterminate footwork on display, as player after player offered limp prods to good length balls, playing away from the body, after a tentative half-step forward that failed to cover the line. Most of them were squared up by the away movement off the pitch.

PUJARA BLOW
Geoff Boycott had once said about Test match batting that the first two hours belonged to the bowlers and that he happily gave it to them, but the next four hours were his and he would then make them suffer! As for playing in the air in Test cricket, he had famously remarked that the first time such a thing happened, questions would be raised in Parliament and the next time the ravens would fly out from the Tower of England.

Patty with a peach!

Through the gate of Agarwal with a wonderful delivery! #AUSvIND pic.twitter.com/ZQjeHEHyuI


India badly needed a bit of that kind of application and discipline and although scoring rates have quickened considerably since Sir Geoffery’s time, India would do well to keep those insights in mind, going forward, if they are to make a match of it in the next three Tests.
Pujara’s wicket was perhaps the most crucial one and it started an irreversible downslide. He was the one player who could have stuck around for ages and worn the attack down. ‘Covered in pigeon shit’ an exasperated Aussie had tweeted about his slow batting in the first innings. That solidity was sorely missing this time around. As was the class and erstwhile comforting presence of the Laxmans and Dravids in the batting order.

TEST OF CHARACTER
It will now call for a big show of character and determination from the batsmen if India are to make a comeback from this humiliating defeat that has again handed the Aussies a huge psychological advantage, one even bigger than what they enjoyed at the end of the second ODI, a little over a fortnight ago.
And as Virat Kohli heads home on paternity leave and Mohammad Shami bows out with a hand fracture, the Indian team is left licking its wounds and pondering over the legion of missed chances in what must also rank as one of its poorest fielding displays in a Test match in recent times.
Where do India go from here? As sanity resumes with a return to normal red-ball cricket, they need to get right back to the basics first and foremost. And while there will most certainly be a few changes in the playing XI for the second Test starting at Melbourne on Boxing Day, they must quickly find a way to pick themselves up from the floor and move on from this nightmare.
They owe it to themselves and to over a billion countrymen back home.