OPINION | Cricket Faces Saliva Test But What A Joy To See It’s Back To Business Again, Almost!

England and West Indies play the first Test at Hampshire’s Ageas Bowl from Wednesday. New regulations following the pandemic will come into force 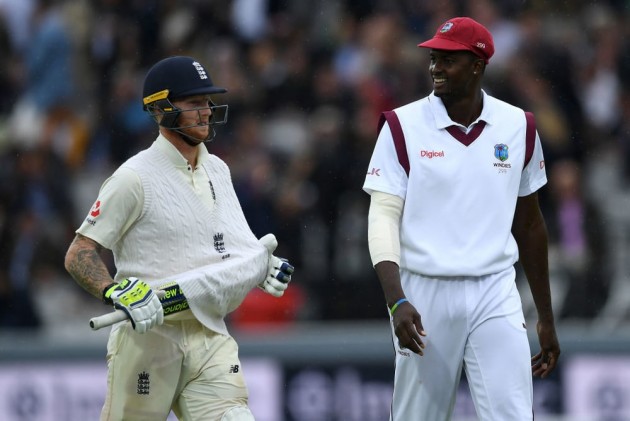 The cricketing community world over collectively holds its breath as International cricket looks all set to make a comeback with the three-Test series between England and the West Indies beginning at Southampton on Wednesday, July 8. This will mark the resumption of international cricket after the coronavirus shut down the world in mid-March.

The First Test is to be played at the Hampshire Rose Bowl, also known as the Ageas Bowl, which is a cricket ground and residential hotel complex in West End, Hampshire. The second and third Tests will be played at Old Trafford in Manchester between July 16-20 and July 24-28, respectively.

In order to conduct the matches safely, the England and Wales Cricket Board have planned to play at biosecure grounds -- venues which have hotels on-site, with sufficient capacity to house all players, match officials and broadcasters during the matches. The thinking is that if the players and officials are safely cocooned within a biosecure bubble for the designated duration, the COVID risk factor would be largely neutralised. 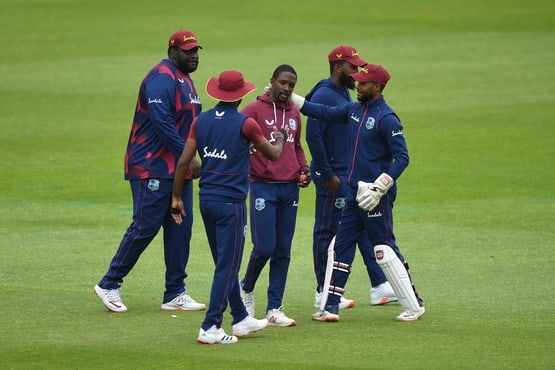 West Indies played a practice match in England ahead of the first Test. Image Credit: Twitter

The only two grounds in England with such capacity in hotels on-site are the Ageas Bowl and Old Trafford. So the ECB planned to host all six Test Matches scheduled in the English home summer at these two grounds -- three each against the West Indies and Pakistan -- as well as six one-day and Twenty 20 internationals.

At this point it seems unlikely that fans would be attending any of these games this year. While it is possible that modest crowd may be allowed from September or so if things go well, chances are that the cricket will be played entirely behind closed doors.

In a worst-case scenario of no cricket being played this summer, the ECB would stand to lose a total of £380 million, according to chief executive Tom Harrison. And even if the full men's international summer can be played behind closed doors, the ECB would still be looking at a £100m loss this summer.

England middle-order batsman Ollie Pope believes the empty stands will not lessen player's intensity or commitment, or affect the quality of cricket. He says, “Even if there's not a single person in the crowd it's still what we’ve all dreamed of doing. There will still be the same nerves in the morning because so much rides on it. When that Test match starts up, crowd or no crowd, you are going to be really up for it." 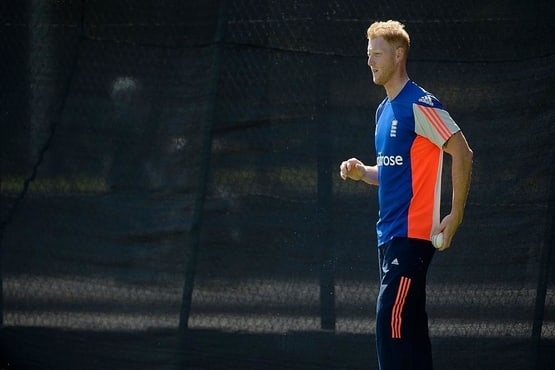 Ben Stokes will be England captain in the absence of Joe Root. Image Credit: Twitter

But another young player James Bracey felt the atmosphere was “strange” without a crowd, and said that players had suggested measures – such as crowd noise and music played between overs – to try to replicate the normal buzz of an international match when the first Test begins on Wednesday.

The absence of an ‘atmosphere’ however, would probably affect the stars more than the rookies, who would arguably be a little more used to playing at sparsely populated grounds.

England’s cricketers finally took the field again for a match on July 1, for the first time since March 13. It has now been 110 days since England quit a warm-up game in Colombo as the Covid-19 lockdowns swept across the globe. This long lay-off from competitive cricket will definitely take the edge off some performances, be it in the execution of technical skills, or physical sharpness on the ground, or in the mental toughness needed to last out long sessions, without losing focus.

There is simply no substitute for competitive match practice to get a player to the top of his game and no amount of net sessions and training can quite compensate for that. So it would be no surprise if some of the players look a little rusty when they take the field in the First Test on Wednesday.

For the selectors too, it has been a new experience: picking a team when there’s been no cricket to select it from. With no first-class game of any sort on view since the tour to Sri Lanka was called off, the England selectors have faced a new challenge in choosing a 30-man training group for the first Test.

This may be the new normal for international cricketers, yet it was still a strange and unsettling new world as they entered ‘the bubble’, after having their temperature taken and thermal body testing done at the entrance to the Ageas Bowl in Southampton to begin their lockdown stay at the venue.

England pacer Mark Wood said that training inside a bio-secure bubble has been a “weird” experience, something similar to a “sci-fi movie.” “Everybody’s masked up and you can’t see anybody. You don’t know if they’re friendly or not! It’s a bit different and a bit weird, but it’s just something we’ll have to get used to,” he added.

Professor Chris Whitty, England’s Chief Medical Officer (CMO) has however, reassuringly opined it would be ‘perfectly possible’ to make outdoor sport work alongside social distancing. Scientists have also found that Coronavirus does not survive on cricket balls for more than 30 secs. So the ball is no longer being viewed as a potential carrier of the disease.

The most noticeable change in how the game is played will be in the way the ball is shined. Experts have warned that spitting or applying saliva on the ball to preserve the shine could be a way of transmitting COVID-19, and other illnesses. So, applying saliva to the ball has been temporarily banned by the ICC and infringements after two warnings will attract a five-run penalty to the batting side. 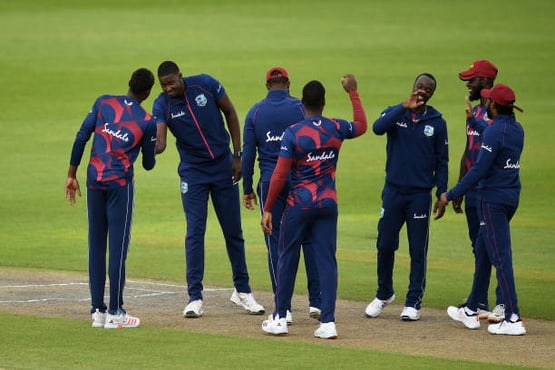 West Indies will be aiming for an all-round performance. Image Credit: Twitter

However, there are concerns that this might tilt the balance of the game in favour of the batsmen since cricketers have traditionally used saliva or sweat to shine one side of the ball to help fast bowlers generate greater swing in the air. After centuries, this is now all set to change.

In another interim measure, the ICC has permitted the use of coronavirus substitutes in Test matches and teams will be allowed to replace anyone suffering with coronavirus symptoms with a like-for-like replacement, subject to the approval of the match referee. Although how this will play out in an actual scenario, considering the isolation and quarantine norms, is a little unclear.

The requirement for neutral match umpires to officiate across all formats has also been temporarily suspended due to the present challenges of international travel.

Instead, teams will be now be given an additional umpire’s challenge via the Decision Review System. Presently there are only two reviews available per innings in a Test match and one in the shorter formats.

Team sport used to be all about socialising, but not anymore for the England players holed up inside the team hotel as they prepare for the first Test.

“You get up and go to breakfast as normal,” said Jack Leach, the England left-arm spinner who is on the reserves list for the First Test. “But the difference is you are all at individual tables - it feels a bit like when you were doing your exams at school and you were all in a row....”

A squad of thirty England cricketers together with about 15 support staff underwent tests for Covid-19 on June 22, as they commenced their stay in the bio secure bubble before the Test series. They had then isolated themselves individually in their rooms until the results came back, 24 hours later.

Once the results were back, and they tested negative, the players had a team meeting before the official commencement of training on June 25.

England’s only warm-up match, a three-day game between the players, was played from July 1 onwards. The three-day practice match between Team Stokes and Team Buttler ended in a draw last Friday. Team Buttler made 287/5 and Team Stokes replied with 233.

The final England Test squad, of 13 players plus 9 reserves, was picked after this and announced on Saturday, July 4 for the opening Test. The squad and management were again tested for COVID-19 on Sunday.

England are currently in the process of rebuilding their batting unit with Rory Burns, Dom Sibley, Zak Crawley and Ollie Pope looking likely to occupy four places in the top six. However, their relative inexperience could be a concern, with Burns the most experienced of the lot, having played just 15 Tests. 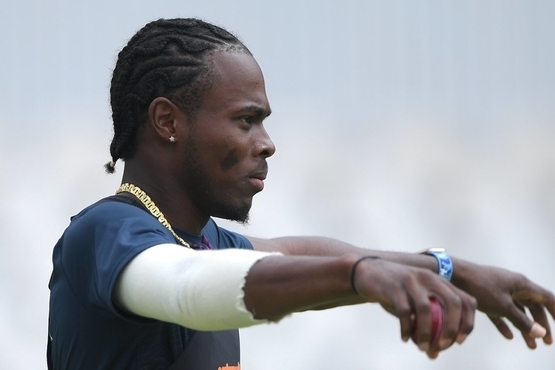 Jofra Archer is expected to be a part of England's bowling attack instead of Stuart Broad in the first Test. Image Credit: Twitter

However, the England selectors on Saturday chose to overlook the proven Johnny Bairstow for a batting spot, in place of skipper Joe Root who opted out to be with his wife for the birth of their second child.  In Root’s absence, the charismatic Ben Stokes will lead the England team out onto the field for the first time in this momentous game.

The West Indies team which had arrived in England by chartered flights on June 9 have similarly been in training under strict quarantine guidelines at Old Trafford since their arrival.

The West Indians are convinced they have brought their strongest pace-attack combination since the glory years of the 1980s and will look to target England’s young, inexperienced batting line up as they aim at a first series win in England in 32 years.

While a bowling attack which includes the likes of Kemar Roach, Alzarri Joseph and Shannon Gabriel backed by Chemar Holder and Jamaican quick Oshane Thomas, looks dangerous, the batting remains a concern.

Coach Phil Simmons said his side cannot afford the kind of batting debacles that have often plagued West Indies tours of England in the past and has emphasised focussed mental preparation for the upcoming games.

They are the current holders of the Wisden Trophy after winning the last series 2-1 at home and believe they have a good chance of winning again.

So, all in all, it looks set to be an interesting series, and hugely important in a lot of ways. One that will break a lot of stereotypes and break fresh ground.