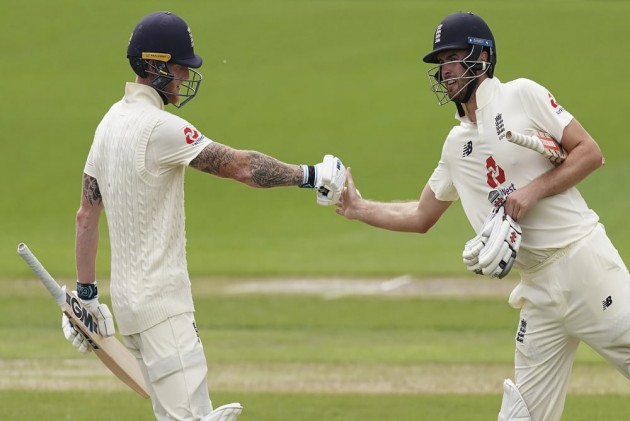 In a return to a centuries-old England tradition, a Test Match started on a Thursday once again at a time when England had made yet another of their traditionally poor starts in a home series, to find themselves 1-0 down at the end of the First Test. Having been outplayed at the crucial moments of the First Test by the West Indies, England needed to come back strongly, to stay alive in a short series. They also needed to execute coach Chris Silverwood’s plan of grinding attrition and wearing out the opposition by batting long hours to score 400 runs in the first innings of a Test Match, something that they had not done in the last 3 years under Trevor Bayliss. They had failed to do it in the first test and had paid the price with a defeat.

In a bold decision, England ‘rested’ Jimmy Anderson and Mark Wood in the crucial Second Test, bringing back a new pair of opening bowlers in Stuart Broad and Chris Woakes. Captain Joe Root returned to the side with England facing a first series defeat at home to the West Indies in 32 years.  On the morning of the match, they woke up to the sobering news that Jofra Archer, one of their most potent weapons in the bowling attack, had been excluded from the Test for breaching the team’s strict bio-secure protocols, potentially dealing a huge blow to England’s prospects of levelling the series. Archer apologised in a statement and was sent back into five days of quarantine and two Covid-19 tests. Left armer Sam Curran took his place.

Three players were to prove vital to the execution of England’s game plan, a stand-in captain who had just lost the first test, getting out when well set in both innings, a rookie opener with loads of determination and patience who can occupy the crease for hours and a star pacer fired up by the hurt of being left out in a home Test for the first time in 8 years. Each of them in their own way ensured that Silverwood’s plans were executed perfectly in this Test Match, with others chipping in at crucial moments.

This time it was the West Indies who put England in after winning the toss in overcast conditions and the England innings seemed to be going the First Test way at 29 for 2, which became 81 for 3 when Joe Root threw away his wicket playing a loose drive outside off. The West Indies seemed to be taking control and England desperately needed a solid batting display at this stage. And that is exactly what they got, as Dominic Sibley and Ben Stokes batted together for the next one and a half days in a 260-run partnership that came off a grinding 94.4 overs, effectively taking the game away from the West Indies. 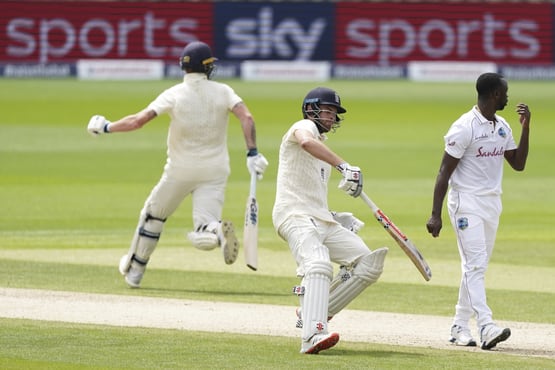 Kemar Roach reacts as Dom Sibley and Ben Stokes take a run during the second day of the second Test match between England and West Indies at Old Trafford. Image Credit: AP

Sibley, with his ugly, open stance and a severely limited repertoire of strokes which consists of mainly working the ball away to the onside off his legs, scored the slowest ever Test Hundred in England, spending nearly 8 hours at the crease. Stokes, almost equally studious, scored his own slowest Test hundred thus far, before accelerating away to a magnificent 176, displaying once again, his ability to shift gears between the patient accumulator and brilliant hitter, at will. It was an innings reminiscent of an equally great knock of 149 played nearly 40 years ago by the legendary Ian Botham, powering England out of the ignominy of a follow on against Australia, to one of their most famous wins.

A checked drive in particular, from Stokes, which went for a six over long-on with hardly any follow-through, was sheer class. England declared at 469 for 9, thanks mainly to this pair, although the rest of their batting still looked sketchy and could pose a problem at a later stage. Batting with Sibley can be a challenge for most players because the task of keeping the scoreboard moving falls almost entirely on his partner, creating additional pressure. Joe Root was probably a victim of this.

West Indies looked ragged on the field, dropping too many catches and wasting the new ball as their bowlers looked tired and dispirited for the most part, their incisiveness of the First Test blunted by the dogged determination of Sibley and Stokes who wore them down.

Shannon Gabriel, their most dangerous bowler in the first test, seemed only half fit. Both he and Alzarri Joseph who looked their best bowler in this Test Match had to leave the field for treatment. Kemar Roach finally picked up a couple of wickets but was hardly the bowler who had decimated England in the West Indies. It was left to off-spinner Roston Chase, who turned the ball appreciably right from the first day, to do the bulk of the bowling, sending down 44 overs for his five for 172.

The loss of the entire third day to rain left England the task of taking 19 West Indies wickets on day 4 and 5 if they were to win the match. Ideally, they would need to bowl out the West Indies for less than 270 and get them to follow on. But the West Indian top-order batted solidly again, particularly Kraigg Brathwaite, Shamarh Brooks and Chase. Shai Hope again failed to convert a good start. At 242 for 4 at tea on Day 4, with the England bowlers barely making an impression, the match seemed to be drifting away towards a tame draw. But a superb burst of seam bowling with the second new ball saw the West Indies losing their last six wickets for 45 runs and helped England gain a first-innings lead of 182.

In what was one of the turning points of the match, a resurgent Stuart Broad took three wickets for one run off 14 balls. Moving the ball brilliantly, he was ably supported by Chris Woakes, who chipped in with three wickets of his own. 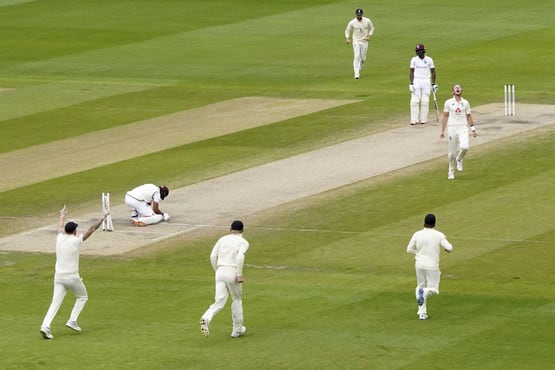 Later, Broad speaking about his inspired spell was to say that match Fitness was more of a mental than physical thing and that all the three England pacers who didn’t get to play in the First Test, felt  they needed a couple of spells before they could hit their ‘Test Match Rhythm.’ He said they hit that rhythm after Tea with the second new ball and expected to go on straight from there in the second innings.

The match was tantalizingly poised on Day 5 with all three results possible. The England Game Plan was to bat for around 11 overs into the morning and set the West Indies a target of around 300, leaving themselves 85 overs in which to bowl them out in the second innings. This included a possible five overs to mop up the tail with a second new ball, should it become necessary at the end of 80 overs. That is exactly how they went about it, with Ben Stokes blasting a superb 78 not out off 57 balls enabling England to declare at 129 for 3, with a lead of 311 runs and 85 overs still to be bowled in the day.

As Broad had predicted, he and Woakes hit their stride right from the first ball in the second innings and soon reduced West Indies to 37 for 4, with Broad again picking up three wickets in a hostile opening spell in which he repeatedly brought the ball back in sharply. Thereafter a stubborn 100 run partnership between Brooks and Jermaine Blackwood ensued and the possibility of a draw started creeping up again. Blackwood who had come in on a pair, played his strokes just as freely as he had done in the second innings of the First Test, while Brooks played some classy drives to reach his second fifty of the match. Blackwood had reached his own 50 earlier and the duo looked set to take the West Indies to safety.

At this stage, the indefatigable Ben Stokes stepped up yet again and like in the first innings, banged in a barrage of bouncers at the batsmen, with two short legs and a mid-wicket in catching positions and a fine leg dropped back on the fence for the hook. He managed to get the dangerous Blackwood to fend a bouncer off his face and Jos Buttler made good ground to pick up a fine diving catch down the legside, making it 137 for 5. This was really the beginning of the end for the West Indies and although Jason Holder chipped in with a brief flourish, it was never going to be enough as Dom Bess finally managed to get one to turn in sharply, breaching his defence. 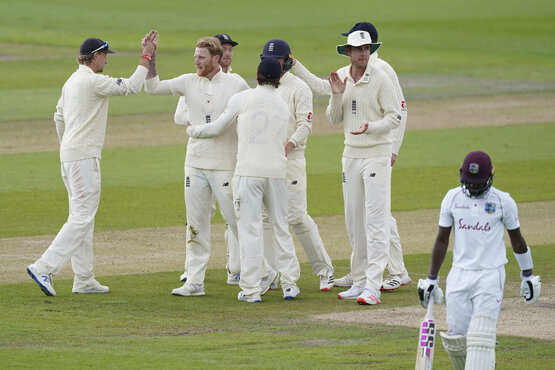 Ben Stokes celebrates with teammates the dismissal of Jermaine Blackwood during the last day of the second cricket Test match between England and West Indies at Old Trafford. Image Credit: AP

West Indies folded up for 198 just after the 70th over of the day, in the face of a fine, joint bowling effort led once again by Broad and England did not need the last five overs with the second new ball that they had banked upon. The West Indies can take heart from the fact that their top-order which was such a concern going into the series, came good in patches again, although it didn’t add up to the kind of totals that they were looking for. The fitness of their frontline fast bowlers now raises concerns, as they go into the third test on Friday with the series excitingly poised at one all. Whether they will now bring in their untested young pacers, is an intriguing possibility that remains to be seen.