Re-inventing International Cricket In The Time Of COVID-19

From employing bigger squads to tweaking revenue sharing models... how international cricket moves forward will depend largely on the ingenuity of the ICC and other influential boards like BCCI 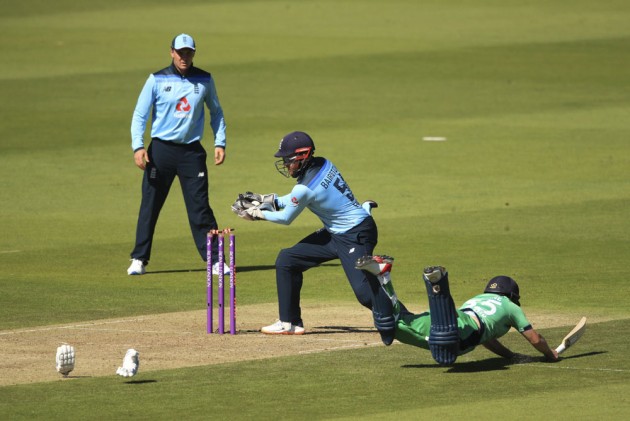 The ‘Revival’ Test series between the West Indies and England has just ended, throwing up some interesting lessons on how the game will be, in the COVID-19 era. West Indies, having risked travelling from the relative safety of the Caribbean to one of the hotspots of the coronavirus pandemic, spent seven weeks in England – confined to the two on-site hotels at the Ageas Bowl and Old Trafford.

It was a courageous leap of faith that brought international cricket back to our TV screens. The constrained state of Cricket West Indies’ (CWI) finances. however, meant that their players had done so accepting a 50% pay cut, prompting skipper Jason Holder to call on England to return the favour and tour West Indies later this year, and help ‘keep them afloat.'

READ: A Familiar Tale, But Not Just Another Test Series

Apart from the interim changes in the International Cricket Council (ICC) laws of the game with regard to the use of saliva on the ball, availability of COVID substitutions and additional DRS reviews to offset home umpires standing in games, along with new operational guidelines relating to safe event management within the confines of biosecure bubbles, there have been subtle but vital tweaks in the way teams are selected nowadays, that are likely to have long-lasting effects in the way the sport is played and funded, worldwide.

How team compositions have changed

To compete across three formats, international cricket has long been squad specific with selectors following horses for courses policy. But as schedules become more and more demanding in the age of COVID – with shorter breaks between games and more back-to-back matches, teams are increasingly using bigger squads, even for a single format.

Apart from injuries, there is now the possibility of players falling ill and becoming unavailable that needs to be addressed, and the need to rotate key players, especially fast bowlers to keep them fresh for the tight match schedules that will become a defining feature of COVID-19 era series. We saw this adversely affecting the West Indies fast bowlers in the just-concluded series, where they were magnificent in the opener, but looked fatigued and jaded in the subsequent games.

Teams will also need to cater for suitable breaks to rejuvenate players who are mentally worn out by the sheer monotony of being locked down in biosecure bubbles for long periods. The West Indian captain spoke about seven draining weeks of a ground-to-hotel-and-back existence, encountering the same faces day in day out.

And of course, there was Jofra Archer’s much talked about breakout from biosecure confinement that saw him fined and dropped from the second Test.

Visiting teams now need to bring over bigger touring parties because of the difficulties of flying in replacements at short notice, meeting quarantine norms, making up teams for intra-squad practice matches, etc. Henceforth, it will be usual for teams to have squads of 22/ 23 players instead of the traditional 14/15 member sides that used to be the norm till now.

England had 22 players (13 in the main team and 9 reserves) cocooned at the Ageas Bowl for the first Test and the West Indies had arrived in England with a 14-man squad, plus 11 reserve players.

Similarly, Ireland now have a travelling squad of 22 players at Southampton, nominating a 14-member squad for the first of their three One Day Internationals, with the provision of bringing in any of the eight reserve players for subsequent matches. Pakistan have a massive 29 players in their tour party.

All overseas players now need to arrive at the biosecure venues at least 14 days before their first match, making for longer than usual gestation periods and a consequent compressing of the gaps between matches that make the rotation of players an inescapable strategy.

While the intense schedules and rotation policy will mean greater opportunities for fringe players, particularly the fast bowlers, it will also mean greater financial outlays on these larger than usual squads, for the respective governing bodies, in terms of expenses, costs and professional fees.

This is a burden that most administrators can ill afford at this juncture when revenues have dropped significantly, especially for the smaller cricketing nations. In fact, the landmark England-West Indies series only took place because the ECB gave Cricket West Indies a bridging loan before the tour, in advance of money due from the ICC.

The main revenue generation for sports bodies is through licensing of TV broadcasting rights. With the cancellation of sporting events, it is likely that most sporting bodies will face financial hits. While boards like the Board of Control for Cricket in India (BCCI) would be relatively better off because of deep pockets, smaller countries like West Indies, Bangladesh and Sri Lanka could face huge challenges if their respective media contracts are not renewed.

ALOS READ: Cricket Faces Saliva Test But What A Joy To See It’s Back Again, Almost!

While the ECB earns £220 million a year from broadcasting deals, Cricket West Indies only gets £12m and all broadcast revenues go to the home board. The CWI CEO had argued this time that a fifth of this should go to the away team for their contribution, a sentiment that his captain supported wholeheartedly.

Calling for greater revenue-sharing to sustain international cricket, the West Indies captain had said that apart from the Big Three, the rest essentially struggle to fund their cricket, their 'A' teams and other developmental programmes and at this difficult juncture, revenue-sharing needs to be seriously looked at. He said if something were not done soon the world would see less international cricket played by the smaller countries.

Even the richest cricket boards are staring at big losses. Cricket Australia stands to lose $174 million should the coronavirus outbreak affect their high-profile home series against India later this year. The cancellation of the IPL will cost the BCCI and other stakeholders at least Rs 3,000 crore, with a real possibility of the Indian board having to return Rs 1,500 crore to Star Sports.

The ICC would potentially need to assist the lower-ranked countries to get back on their feet at this time. Without enough cash flow, some nations might struggle to meet even basic expenditure and unless they are provided with this support, their cricket could just fade away.

Reciprocal tours by the Big Three to these countries, as requested by Holder and also by the Pakistan Cricket Board, will need to be seriously considered, in the overall interest of the game. Some countries may need active support to tide over this crisis.

According to a UN Department of Economic and Social Affairs report, the global value of the sports industry is estimated at USD 756 billion annually. Of this, professional sport contributes only 23% or 171 billion USD, while sports retail accounts for 36%, club and gym fees contribute 15% and infrastructure, food and beverage and betting, 26%.

Therefore, if fans are absent from sporting venues and clubs and gyms for long periods, nearly 77% of the total revenue generated by the sports industry, amounting to 585 billion USD, is badly impacted. So, it is necessary and vital for the survival of sport to get spectators back to the venues as soon as possible. Leading fans to the requisite levels of fan engagement will in turn positively influence other revenue-generating parameters.

Return of fans to county games

Towards this end, a series of pilot events have already begun in England with 1000 fans watching Surrey play Middlesex in a two- day friendly at the Oval last weekend. After a wait of 136 days, fans have finally returned to one of British sport’s major venues, making it one of the most welcome milestones in the ground’s 175-year history.

This was a prelude to the Bob Willis Trophy, an abbreviated version of the County Championship named in his honour. The 18 counties have been divided regionally into three groups of six, each playing five matches between August 1 and early September, ending in a five-day final. A limited number of spectators are expected to be allowed at each game in a gradual return to normalcy.

Obviously, any revenue-sharing arrangement will need significant contributions and support from the BCCI, which generates 80 percent of the game’s revenues. But it needs to be done if international cricket as we know it today, is not to be lost to the highly commercialised private T20 leagues.

These would sooner or later end up killing the golden goose; for, beyond a point, fans will simply get fed up watching contrived T20 run chases and turn to something else. This is why, it is so necessary to keep quality international cricket alive, while the stateless slam-bang leagues serving as a necessary accessory – an instrument of mass entertainment for the long- term survival of the game.

But they should never be allowed to take over the game itself, which could be a distinct possibility if the smaller cricketing nations are allowed to fade away for want of finances.

It’s time for the ICC to put its hand up and take some major policy decisions to secure the future of the game.