In comparison to the horror of terror attacks, removing portraits is only a symbolic response, a form of token protest 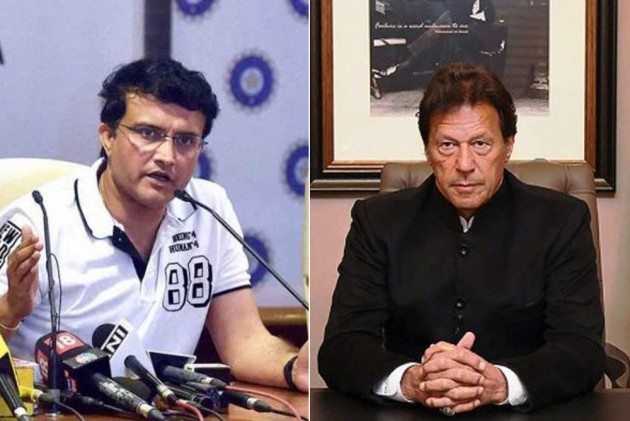 In one of the strangest battles of World War II, American and German soldiers fought together against the Nazi SS to save French prisoners of wars which included two former prime ministers – Edouard Daladier and Paul Reynaud, and tennis player Jean Borotra – one of the Four Musketeers. And they succeeded.

It tells how friendships can emerge in trying times like wars and revolutions, and survive. Can we expect something similar in the present time? The answer is an absolute yes; because love always triumphs over hatred. And it can start with one simple step like protecting a portrait.

That's what the former India cricket captain Sourav Ganguly has been trying to do. After the unfortunate events of last month which brought India and Pakistan – two nuclear-armed neighbours – to the brink of a war, a never before seen rise in jingoistic nationalism on either side of the Radcliffe Line has created a climate of hate, where pacifists were often reduced to ugly monikers — anti-nationals, traitors et al.

Ganguly, who demanded cutting all ties with Pakistan after the Pulwama terror attack, was deemed an anti-national after he refused to remove the portrait of Pakistan Prime Minister Imran Khan and other Pakistani cricketers from the clubhouse of the Eden Gardens.

The Bengal unit of the Bharatiya Janata Party (BJP) protested Ganguly's stand and the standoff has since been interpreted as a proxy fight between the saffron party and Trinamool Congress, which rules West Bengal.

Earlier, after the covering of Khan's portrait at the Cricket Club of India in Mumbai, cricket associations in Punjab, Rajasthan and Karnataka have removed portraits of Pakistan prime minister and other Pakistan cricketers from stadiums in the stadiums in Mohali, Jaipur and Bengaluru in protest against the terror attack.

In comparison to the horror of terror attacks, removing portraits is only a symbolic response, a form of token protest. But, by removing and tearing down something which was in first place installed to exhibit or relate to heroic stories – which encompasses humanity – doesn't always end with mere symbolism. It more often than not propagates hatred.

And strangely enough, cricketing ties still continue to bind India and Pakistan on a level which will be impossible to replace. This could be the sole reason why every time hostilities between the two countries reach a new peak, the game of Cricket becomes the target. From a nationwide romance, it is reduced to something to be used as a political tool.

Meanwhile, we could also ponder over the importance and purpose of portraits and for that matter of fact, other works of art. These creations help us remember someone or an event; documenting a collective history, for the future generations. But these things become soft targets whenever tumultuous changes happen. [Unfortunately, the history of mankind is replete with stories of vandalism.]

Ganguly's stand also reflects his respect for Khan. As individuals, both the former captains have immense admiration for each other. And that's not a rarity when it comes to players, especially cricketers from both the countries. This is what the leaders of the two countries need in these of crisis.

In one of the often quoted anecdotes from his book A Century Is Not Enough, Ganguly narrated how Khan once guided him to find his lost spot in the Indian squad after being dropped from the national team. He wrote, "Imran said something I shall never ever forget. ‘Sourav, you should fly higher. When you fly in the sky and see dark clouds, the only way to negotiate is to fly higher’.”

Today, Khan may be the face of an enemy state; but as a player, his on-field exploits would often make the majority of Indians nostalgic. This is the perfect time appreciate the difference between public and private worlds of individuals. The superfluous public appearances of public figures may well be as fake as the professed patriotism of jingoist nationalists.

Ganguly and Khan might not have met in the field of play, but they became close friends thanks to a game people from both the countries love. Ganguly took little time to congratulate Khan when the 1992 World Cup winner was on the verge of becoming of Pakistan's prime minister.

"Congratulations to him. He has been fighting for a long time and now he is set to become the prime minister of Pakistan," Ganguly, who is also the president of Cricket Association of Bengal, had said.

Both of them belonged to a generation of cricketers who met frequently enough to know each other, both on and off the field. Ganguly played 12 Tests and 53 ODIs against Pakistan, while Khan played 23 Tests and 29 ODIs against India.

And there were times when Indian and Pakistani players took the field together, against World XI teams in the 70s, including one match during the Indo-Pak war.

Imagine what would be the reaction if any of the current players do that? And in a broader sense, how many young Indians and Pakistanis today will consider each other a friend?

Since the partition in 1947, India and Pakistan have been sworn enemies, but like in the past, these two nemeses need someone like Ganguly to keep up the fight to save the love. And he might have just won the first battle by simply keeping one portrait intact.