Tamil Nadu: A State For Statues

Tamil Nadu has an obsession for statues long before the tallest came up in Gujarat. 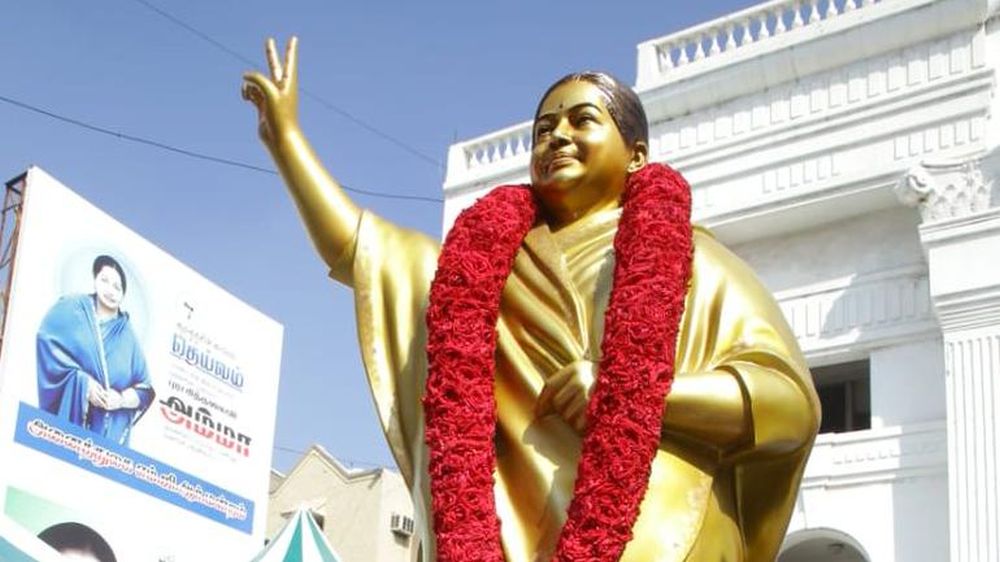 On Wednesday the ruling AIADMK corrected an unforgivable mistake by Tamil Nadu’s political standards. It replaced a statue of their leader Jayalalithaa that hardly looked like her with one that at least resembled her. The corrective step became necessary as in Tamil Nadu you don’t take two things lightly – a leader’s statue and his samadhi – look how Stalin fought for his father’s final resting place. The state’s politics is actually marked by interesting events about its many statues.

So finally when the replacement life size bronze statue of Amma got unveiled AIADMK cadres were satisfied that at least this time the sculptor had got it right. The first statue that was hurriedly unveiled before the AIADMK HQ to coincide with Jayalalithaa’s 70th birth anniversary in February had only invited criticism and ridicule as it had no semblance to the late leader. 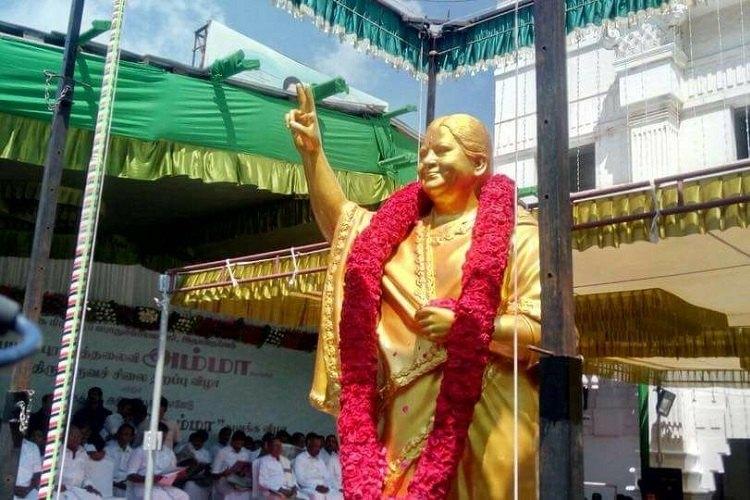 Social media was flooded with jokes and memes that the statue actually resembled the wife of Chief Minister EPS while another punster joked it actually looked like Kamal Haasan in ‘Chachi 420’. Even senior ministers admitted that the statue did not convey the looks or majesty of their Amma and that a new statue would be erected soon. So this time the AIADMK gave the project to a different sculptor and only after the Plaster of Paris model was approved by a group of ministers, the final statue was cast.

Meanwhile the DMK, not wanting to repeat the AIADMK’s mistake, has been more careful while the statue of their leader Karunanidhi is being readied. The 8 feet bronze statue, to be erected in front of the DMK headquarters in Chennai, is being shaped by sculptor Dheenadayalan. DMK president M.K. Stalin visited the sculptor’s studio in September to inspect and okay the PoP model before it was cast into bronze.

Karunanidhi actually had a statue on Chennai’s Anna Salai, erected by his political ally the Dravidar Kazhagam in 1973 when he was the Chief Minister. That statue was broken by agitated AIADMK cadres on the day of MGR’s death in Dec 1987. This correspondent had photographed that statue being brought down with a crowbar being driven into Karunanidhi chest which was published in ‘The Telegraph’ newspaper. Reproducing the photo in his party organ “Murasoli” Karunaidhi in his poetic way had bemoaned “Brother I am happy that you stabbed me only on my chest, not on my back.” After that he had dissuaded anyone from erecting his statue as long as he was alive. 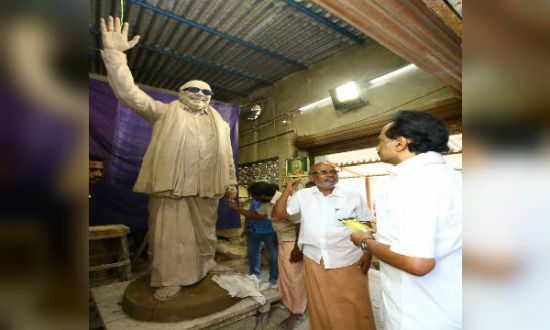 When it comes to dotting Tamil Nadu’s landscape with statues, Karunanidhi was hard to beat as he erected statues for state leaders in almost every district. He was the first to honour Tamil literary figures with statues along the Marina Beach, something that N.T. Rama Rao had later replicated in Hyderabad. The 130 feet tall statue for Tamil poet-saint Thiruvalluvar that Karunanidhi had erected on a rocky island where the three seas mingled off Kanyakumari, is considered an engineering marvel given the rough conditions that challenged those erecting the statue.

When the December 2004 tsunami wreaked havoc along the state’s coast, the first question that Karunanidhi had asked from his hospital bed was if the Thiruvalluvar statue had survived the giant waves. Miraculously it had withstood the onslaught.

In 2002 during her second term as CM, Jayalalithaa removed the statue of Tamil literary figure Kannagi erected on the Marina by Karunanidhi in the '70s. The excuse given was that the statue had been knocked down by a lorry and it was getting repaired. The rumour was that Jayalalithaa had it removed after being advised by her astrologers that the statue on her route to the secretariat was inauspicious as Kannagi is believed to have burnt down the city of Madurai after her husband was wrongly executed by the Pandya King.

But the DMK would not take this lying down and instead erected a new statue of Kannagi in front of its Youth Wing office on Anna Salai the very next year. And when he returned to power in 2006, Karunanidhi in the very first month had the original Kannagi statue, dumped in the state museum, restored to its old place on the Marina, where it stands tall till date.