Tejashwi Has To Tread With Tact, He Cannot Afford To Do A Lalu

It would be a mistake on part of his opponents to take Lalu Prasad's junior son Tejashwi Yadav lightly given the fact that he is widely acknowledged to be a true inheritor of his father’s legacy, tainted or otherwise. 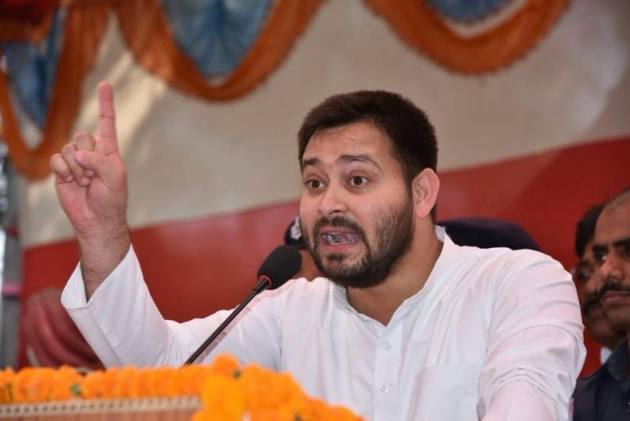 Is the Lalu Prasad Yadav era gradually coming to an end in Bihar? With the Rashtriya Janata Dal president languishing in jail barely a few months before the general elections, will his heir-apparent, Tejashwi Prasad Yadav, be able to rise to the occasion and stop the Narendra Modi-Nitish Kumar juggernaut in the battleground Bihar next year?

After being convicted in the different cases of the Rs 900-crore fodder scam, Lalu has not been keeping good health these days. Even if he is granted bail before the Lok Sabha elections, it is unlikely that he would like to undergo the rigours of a poll campaign the way he had done in the parliamentary and assembly elections in 2014 and 2015 respectively.

Lalu's absence will definitely be a double blow to the RJD and may harm the party’s prospects at a juncture when it is hoping to turn the tables on the NDA. Lalu has undoubtedly been an orator extraordinaire with his ready wit and an uncanny ability to connect with the masses. Since his ability to draw crowds to his rallies has been beyond reproach over the years, his absence will be felt acutely by his supporters and candidates on the campaign trail.

The RJD can, however, take solace from the fact that Laluwill remain an important factor in the elections, with or without his presence in the poll arena. As always, he will continue to be the biggest vote catcher for his alliance.

An analysis of the last few election results in Bihar indicates that Lalu has remained a force to reckon with all these years. His party has consistently got around 20 per cent votes even in the worst of times and he remains the only factor behind it. Even the taint of corruption charges has failed to alienate his core supporters. Tejashwi is not wide off the mark when he insists that his father is not merely a mass leader but an ideology.

It may be debatable whether Lalu has indeed become a vichardhara (ideology) but he will remain Tejashwi’s biggest political strength when the latter goes out to seek votes. But will he be able to use his father's name and legacy to his political advantage in the poll arena? A first-time legislator, Tejashwi has not yet gained enough political experience despite showing remarkable maturity. In the past three years, he has conducted himself well, first as the deputy chief minister in the Nitish Kumar cabinet and then as the leader of the Opposition. It would be a mistake on part of his opponents to take him lightly given the fact that he is widely acknowledged to be a true inheritor of his father’s legacy, tainted or otherwise.

Like Lalu, Tejashwi will also hope to get the bulk of the 30-odd per cent of the Muslim-Yadav (MY) votes transferred to his alliance and tilt the balance decisively in its favour. Of course, he is up against formidable opponents. Nitish Kumar has been known to be a master strategist and knows how Lalu’s mind works. His deputy, Sushil Kumar Modi too knows the ins and outs of the state politics like the back of his hand. Together, their combo is considered almost unbeatable by many political observers.

Tejashwi, therefore, will really have to move the mountains to first defeat them in the parliamentary polls and then dislodge them from power in the 2020 state elections. But he will have to set his own house in order to achieve his twin objectives. Already, reports of a growing rift between him and Tej Pratap Yadav are doing the rounds. His temperamental elder brother has often put the party in embarrassing situations with his controversial statements. He can prove to be a loose cannon if he is not handled with tact and care. Even though the Yadav siblings have denied any rift in the family and accuse Nitish and the BJP-RSS of spreading canards in this regard, Tejashwi needs to put up a united show not only with Tej Pratap but also his eldest sister Misa Bharti, who was sent to the Rajya Sabha by Lalu. Any picture of a divided Yadav family will not augur well either for his party or the alliance.

Tejashwi also needs to keep the elders in the party such as Raghuvansh Prasad Singh, Jagdanand Singh, Shivanand Tiwary, Ramchandra Purbe and others in good humour by listening to their advice and grievances, if any.

Lalu himself may have run the RJD as a veritable one-man organisation without ever bothering to consult any senior party leaders but Tejashwi has to learn the ropes of politics. He has to take everybody along if he wants to succeed in his quest for electoral success. Thankfully, he has shown the signs of being a quick learner but his political sagacity will be put to a real test only in the run-up to the parliamentary polls. He should realise that he has got an opportunity to prove his leadership mettle quite early in his career only because of circumstances. He cannot afford to squander it away by locking horns with his siblings or leaving the party veterans sulking behind his back.

He is, after all, no Lalu Prasad who could get away with anything in his party without ever feeling the need to have anybody by his side.