The Curious Case Of The Horse In The Daytime 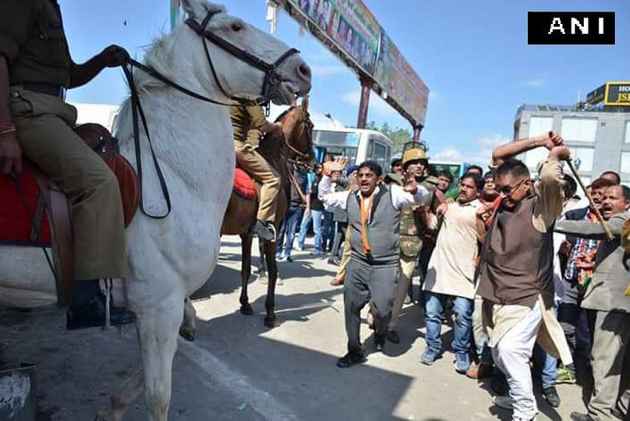 This morning nearly got off to a good start. My breakfast browse of the daily news had failed to turn up anything too traumatic and the morning brew was satisfying.

Imagine, then, my coffee-spilling dismay upon opening a video article and witnessing an allegedly adult man attacking a horse with a lathi. The revelation that this individual is a BJP MLA was less astonishing than the attack itself, but nonetheless distressing in the context of his being an allegedly elected official. Yet I found on further reading that there is more here to be disturbed about than simply the senseless violence, upsetting though that is in its own right.

First is the near-ubiquitous presence of the word “allegedly” in the reports describing the attack. The Indian Express remarked that “A police horse was allegedly attacked by the BJP’s Mussoorie MLA, Ganesh Joshi…” while The Times of India summarised this incident as the horse being “…severely injured in the leg allegedly by BJP members”.

These are strange words to use alongside photographs and video of a man positively identified as Ganesh Joshi, certainly a BJP member, most definitely hitting a horse with a stick. One wonders what burden of evidence might be required for these publications to turn this “alleged” attack into a real event that really happened in front of a camera that really was recording it. Perhaps a written testimony from the injured horse itself, once it has recovered sufficiently to testify?

A reasonable person may feel that an admission of guilt from the man involved should suffice. But this brings us to the second problem – that of the BJP and its members’ seemingly pathological need to cover up wrongdoings at any cost, usually also resulting in unintentional comedic masterpieces. Joshi’s official statement on the matter begins with the claim that “It was a quiet protest, but still mounted police was deployed to create terror.” Grammatical eccentricities aside, this statement directly contradicts witness accounts and video evidence of the event. Furthermore, it implies an assumed moral superiority to the police officers which he hammers home with the statement “I snatched a stick from the policeman and tried to stop the animal from attacking others.”

We can only speculate what horrors might have been wrought had this brave man not intervened to beat back the rampaging horse! A horse that was, seconds earlier, punched on the nose by one of the courageous men standing beside our heroic protagonist. You need not take my word for this – you can see it in the video.

A little critical analysis might see us through to the twisted logic behind such a statement. This is a man who likely believes himself to be on a moral crusade, fighting injustice wherever he sees it. The horse is thus seen as an agent of a corrupt government; the injuries he bestows upon it are divine justice meted out by a man whose own slate is clean by simple right of birth and status.

The pack then rallies around. We hear from DNA India: “BJP spokesman Munna Singh Chauhan denied the charge claiming that the horse had got injured after one of its legs got stuck in a pothole. State BJP President Ajay Bhatt said he had not seen the videos and would not able to comment on the circumstances that may have led to injuries to the horse.”

So there we have it: a horse that may or may not have been injured by a man who may or may not have attacked it and may or may not be charged with an offence. After all, all we have to go on is a video of an attack featuring the man, his face and those of his companions. It seems that when the BJP is involved the truth of such a matter could turn out to be anything.