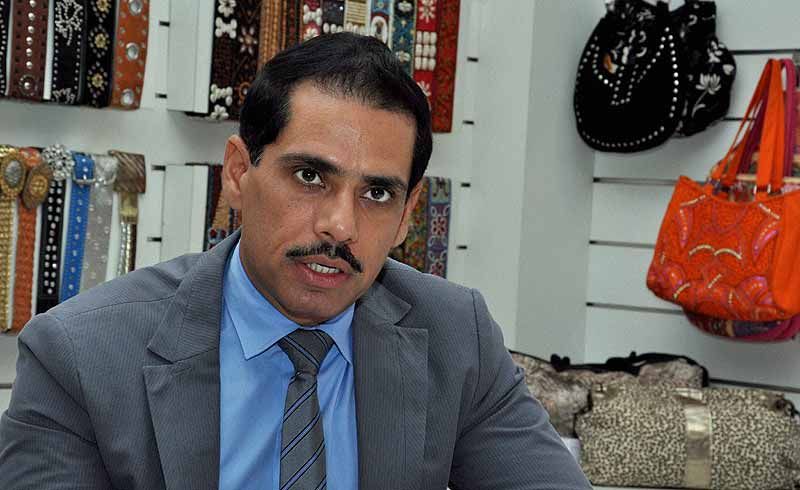 For those who came in late, please see from our archives: 'The Mother Of All Sweetheart Deals' which basically pointed out:

On March 14, 2011, the Economic Times carried a story titled Robert Vadra ties up with DLF, makes low-key entry into Real estate business, by Rohini Singh & Sruthijith KK, which basically pointed to how starting with Artex, a small company specialising in jewellery and handicraft exports, Robert Vadra's business empire had grown to five companies, which in turn, with paid up share capital of only Rs 50 Lakhs, but with the help of unsecured interest-free loans from DLF had been able to buy properties from DLF itself at sharply discounted rates.

Intriguingly, the opposition BJP and the Left, did not pursue the story —according to the TOI, "Leader of Opposition in the Lok Saba Sushma Swaraj felt it would not be good form to target family members of political rivals", but there was much speculation on Twitter that the resistance was because of various skeletons in the opposition's cupboards, even from such personalities as BJP-supporting journalist Swapan Dasgupta who said: "Resistance in BJP on raising Vadra issue is from some a of its ex-Presidents." Among others, the names of former Prime Minister Vajpayee's son-in-law Ranjan Bhattacharya kept cropping up in the buzz around the story.

Soon thereafter, on March 22, came another story, 'Vadra Has 20% Stake In Unitech', but both the stories were allowed to die down with the opposition and the media not doing adequate follow-up despite the fact that, as the Financial Express then editorialised:

For the government and the Congress party, however, the problem is more serious. Given how many clearances a real estate firm needs from government, for land-usage to be changed, for FSI levels and a lot more, there will always be fingers pointed if the UPA chief’s son-in-law has business dealings with a firm getting these permissions. The onus is now on the government and the Congress party to show that the clearances it is giving are not under any form of influence.

Then after some 18 months of the ET story, came the press-conference by Arvind Kejriwal and Prashant Bhushan which essentially took forward the ET story with documentation:

The Hindu has a comprehensive follow-up story to the charges levelled against Mr Robert Vadra by Mr Prashant Bhushan and Mr Arvind Kejriwal and the statement issued by the DLF in response in story by Shalini Singh today:

Though the documents reveal no illegality or impropriety on the part of Mr. Vadra, they do raise the question of why DLF — which is a publicly traded company — would enter into multiple business transactions with him on terms that appear highly preferential. The company on Saturday issued a lengthy press release setting out its side of the story but questions of corporate governance remain and minority shareholders are likely to ask the company for the rationale behind its arrangement with Ms. Sonia Gandhi’s son-in-law and whether similar soft loans (or “advances” as DLF prefers to call them) and deals have been transacted with companies owned by other prominent individuals. The answer to the second question may help explain why a normally feisty Opposition has been remarkably silent on the DLF-Vadra connection since the story first broke in 2011....

The Hindu story by Shalini Singh goes on to make some significant and interesting points:

The Hindu also provides some perspective by quoting a senior chartered accountant that masking incomes as loans/current liabilities is an unorthodox accounting device.

“Using short term funding of this kind to create long-term assets defies financial prudence as it constitutes a high business risk, unless they are not really ‘current liabilities’ and are not payable in the short term, which means they are nothing but incomes which have been disguised,” he said.

Read on at the Hindu: Behind Robert Vadra’s fortune, a maze of questions

The Business Standard, in its editorial today, asks:

The following questions arise: is it the usual practice for DLF to give an advance equal to 86 per cent of the sale price on land, before the sale takes place? Further, if such an “advance” given in 2008-09 was still outstanding two years later, it would appear that the sale was not closed by March 2011. If the money was kept by Sky Light for two years and more, and if no interest was paid in the interim, an “advance” equal to 86 per cent of the stated transaction value does take the appearance of an interest-free loan. Quite apart from all this, if Sky Light, apparently incorporated in 2007, had already acquired fixed assets valued at Rs 58 crore by 2008-09, how was the original acquisition funded by a company with total resources of Rs 5 lakh?

Read on at the Business Standard: Tell Us More

R. Sukumar, the editor of the Mint:

To call the story of the growth of Vadra’s business empire, detailed in a Page 1 story in The Hindu today, rags to riches would be stretching things a bit simply because there were no rags at its beginning. If anything, The Hindu’s description makes the business model of Vadra’s companies sound like a perpetual motion machine, with assets swelling despite no increase in business activity...

...Indeed, given the specific charges being levelled, both Vadra and DLF would do well to set the record straight

The real question at the end of it all with, to say the least, so many inconsistencies and contradictions is to find not just ordinary ministers but a state governor and the finance minister of the country ruling out even the necessity of a probe, thus sending out a clear signal to the various institutions which should normally be investigating such cases in the routine course itself.

But then, as Mr Vadra reminded us in his Facebook post today, we are just 'Mango People in a Banana Republic'.