The Familiar Global Eeriness of The Job

The psychological thriller, starring Kalki Koechlin, stands out in the throng of Indian short films on YouTube 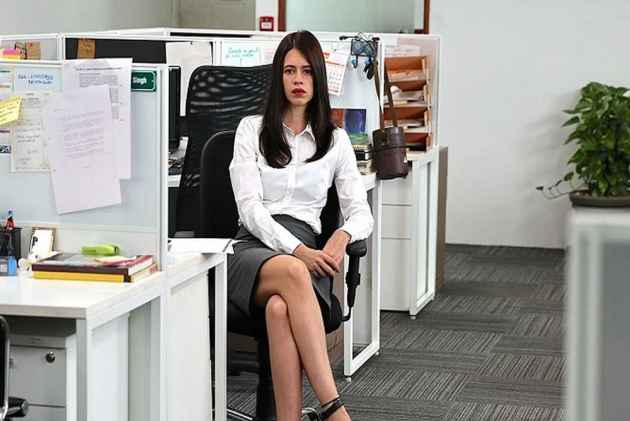 The architectural mould of the global corporate office is like an airtight box. You enter the structure leaving outside your own context—your lived experience so far, the city you dwell in—to be a functional part of this uniformly regimented reality. The basic atmosphere of the facility—with its card-operated doors, central air-conditioning, coffee machine—is the same, be it a New York skyscraper or a Mumbai tower. Once inside, you truly become part of the global, a space which the local is kept outside of. This desired isolation from the immediate geographical context is bound to have a bearing on the individual too, who straddles between shifting realities everyday: from the corporate reality to the individual reality, on loop.

The staccato chug of a car passing through a city tunnel, lit by its equidistant lights, acts as a bridge to this loop—from home to office. It’s the opening shot of The Job, director Siddharth Sinha's 14 minute short film starring Kalki Koechlin. It released last month on YouTube, where the film has garnered several hits. One can categorise it as a psychological thriller, since so much of it happens in our protagonist’s mind. It’s the reason the discussions below the YouTube link of the film are filled with interpretations and Q&As. The lack of a clear-cut plot in The Job seems to be the root cause.

But then, should a short film, or any film, always keep the viewer in the know of things? The tide of Indian short films that has swept YouTube of late offers an answer. Most of them are short, sweet and comfortably understandable. It’s a doing of easy access and quick consumption—the factors that give the platform the power to make things viral. And the formula that works, more often than not, is this: the simpler you keep things, the more they will be seen.

The Job, in that sense, is a rebel: a film that looks as if it bypassed the film festival route to land here, in the collective internet visual conscience. And, despite the perplexed comments, it has worked. The views on its page are increasing by the day.

It is the atmosphere around the protagonist that gives the film its shape. The layered isolating of an individual from their surroundings, a woman at that, is the plot. Kalki works in an office all alone. But from her reactions, we feel that there are people around. She smiles apologetically when she drops some papers, although we see no one around her. Are there people around, or is she just hallucinating? We can hear her boss’ voice briefing her about work, but we see her staring at an empty chair in the next frame. To think of it, it doesn't matter if the people were there or not. Alienation is distancing, even when people are all around.

The sound design of the film helps experience this lifeless drudgery of the protagonist. A minimal symphony in empty spaces—typing, telephone ringing, alarm ringing, the sound of eggshells on a plate, the sound of pills on a plate, distant laughter, all encapsulated intermittently in industrial-sounding samples. The colours of the frames too are monotonous, broken only by the sight of blood in this otherwise pale visual palate. But it appears that was a vision too.

In all, the film imparts the benumbed sense of the protagonist to the viewer. It didn't do that for me in the first run, but the second time I watched, it worked.