The Officer Who Investigated Robert Vadra 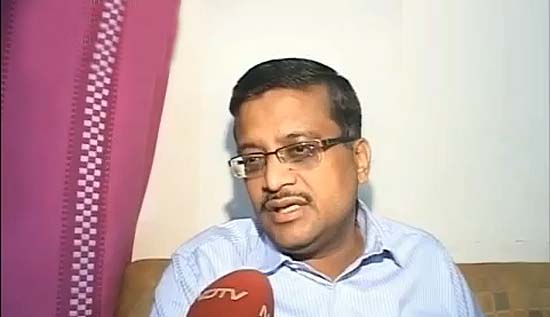 Till last week, not many had heard of senior IAS officer Ashok Khemka, a Kolkata boy from St. Xavier's Collegiate School, with Computer Science engineer from Indian Institute of Technology, Kharagpur (IIT KGP - 1984-1988), a Ph.D in Computer Science from The Tata Institute of Fundamental Research (TIFR), apart from holding an MBA and an MA degree in economics

Even the news item on Saturday, October 13, about a whistle-blowing IAS officer in Haryana, who had apparently been transferred for the 43rd time in his career spanning 20 years did not attract much attention.

The story of Director General, consolidations of holdings and land records in Haryana, who had been barely been allowed to last in his post for less than two months before abruptly being transferred as Managing Director of Haryana Seeds Development Corporation (a post previously held by an officer 12 years his junior), was not exactly front page news on the next two days either.

The PTI news report of October 13 quoted him as saying:

"It is shocking to learn about my abrupt transfer...this is deliberate and malafide to punish me due to some vested elements in the political-bureaucratic hierarchy affected by the expose of the scams in consolidation of land holdings under the exercise of powers...

"Forest and hill areas were sought to be partitioned under the garb of consolidation to corner prime plots near highways to build farmhouses or resorts. Panchayats also lost huge lands in consolidation by deliberate under-valuation.

"Not only this, during inspection of land records it was discovered that thousands of acres of panchayat land after illegal mutations in favour of owners were subsequently partitioned into small parcels and sold away...

"My family feels threatened due to certain vested elements whose interests were adversely affected by the exposure of scams in this Department (last posting). I plead for security and fixed tenure in a cadre post befitting my seniority".

During his 50-day stint in the department, Khemka had detected serious irregularities in land transactions involving transfer of panchayat land worth several hundred crores of rupees to newly created real estate companies and asked for an enquiry into various transactions in Gurgaon, Faridabad and Yamunanagar districts.

"India is not a banana republic... There are scoundrels in the system. And you get transferred. Your peers and seniors.. everybody points an accusing finger at you, saying 'We told you so'. It is like a girl who is raped by scoundrels and the society points the finger at her and tells her, 'Look the fault lies in you' ... The unfortunate part is that the laws were framed with noble objectives but there are scoundrels in the system, who misuse them ... "

Demanding investigation into his charges, he added: "I would personally like that a clarification is done after an open investigation and enquiry so that the people's faith in the government of the day is restored"

But the penny did not drop till the Hindu ran a front-page headline on Tuesday, October 15: Senior official probing Vadra-DLF land deal shunted out:

A top official in the Haryana government’s land registration department was transferred hours after he initiated a probe into all the land dealings of Robert Vadra, son-in-law of Congress president Sonia Gandhi, in four districts of the State neighbouring Delhi, The Hindu can disclose.

The ruling Congress establishment's response was predictably to clutch on to technicalities and point out that since he was transferred on October 11, it was not proper for him to issue orders for an inquiry across four districts into the “alleged under-valuation of some properties registered by Shri Robert Vadra or his companies as vendor or vendee” on October 12 or, worse, on October 15, the last day of his tenure before handing over charge, cancel the mutation of the 3.531- acre plot that Mr Vadra’s company, M/s Sky Light Hospitality, had sold to DLF Universal Ltd on September 18, 2012.

While Mr Khemka, well-regarded as an honest and upright IAS officer, did not directly link his investigations into l'affaire Rober Vadra in his first letter protesting his transfer to the Chief Secretary, Haryana, on October 12,  he pointed out that he had begun making enquiries into various land-deals of Mr Vadra ever since serious doubts were raised about them on October 5 in Mr Arvind Kejriwal's press conference of October 5, followed by detailed press-coverage and revelations in prominent national dailies and TV channels. Being the man in charge of land-registrations and consolidations in Haryana, he felt duty-bound to investigate.

Mr Khemka pointed out that his motivations into initiating investigations were simple: "The confidence of the people must be restored in public offices. So if the allegations being levelled are wild, let it come out. And if the allegations are true, then certainly actions must be called for. "  As  the Hindu reports:

Mr. Khemka reiterated the fact that he was issued his transfer orders at 10 pm on October 11, after he had issued written instructions to the National Informatics Centre (NIC) to procure land registration data from the districts that had not submitted this to him when he had asked them to do so. He had an argument with the deputy commissioner of one of the key districts under the scanner that morning over the latter’s failure to send the data. “I told this officer that if he did not do so, I would issue him a DO letter, and I followed this up, by issuing a written authorisation to the NIC to procure the data...

But still, was it really OK for Mr Khemka to order investigation into Mr Vadra's various land deals and cancel the mutation of land favouring DLF after he had received his transfer orders?

As Mr Khemka pointed out to reporters today: "I served as IG, Registration till 4:30 pm yesterday, the time when I relinquished charge."

So clearly, he was within his rights, as he held the designation till he relinquished charge, and, as he said, he would have been running away from his duty if he did not pass these orders against a patent illegality that had come to his knowledge.

Now, did he have the right to cancel the mutation favouring DLF? As he wrote in his order of October 12,

He went on to order an inquiry across four districts of Haryana into the “alleged under-valuation of some properties registered by Shri Robert Vadra or his companies as vendor or vendee” and asked that it be completed by October 25. [See Order dated October 12, 2012 that follow in the Scribd documents]

He further expanded on this in his interview to the Business Standard:

License on discretion is now being misused and is used for money making business. Just see how land parcel of 7.5 crores could be changed to Rs 65 cores in few days, just because of license. Licensing now has become biggest source of corruption. So much profit is being cornered by few including developers and middle men. I am just seeking the benefit should be equally transferred to all.

Even SC in its judgment has said land is a natural resource. I just want that the government keep this thing in mind.

He also pointed out that actually the entire sale of the land to DLF was questionable. Since the land was under consolidation, ordinarily the sale deed ought to have been set aside. But since he was not the revenue authority to do so, he could not cancel the sale. But he did have the authority to cancel the mutation which he proceeded to do.

Was he still within his rights to do so?

As he told the Hindu:

“I had sent my letter to the Chief Secretary on October 12 and was waiting for a reply from him. I held on to the charge in protest till the 15th, but when I did not hear from him, I issued the order on the Shikohpur–Manesar deal and then relinquished charge of the department. As the head of the department I was only doing my duty to clear the department of any allegation of wrongdoing.”

Did he ask for a transfer himself?

Haryana government in its press release also — incredibly— maintained that he was transferred in accordance with his wishes, as he had asked for a transfer himself from the Chief Secretary.

Indeed, he maintains that he “approached the court since special land acquisition officer and special collector were of junior ranks" Accordingly, on Oct 1, the court had directed the Haryana government to post someone else as Special Collector and to relieve Mr Khemka of the charge.

Why has he made the subject of his transfer public this time when he had not the earlier 42 times?

Mr Khemka took the rape analogy further, in an interview to the Business Standard:

Earlier I ‘was raped with consent’ [an apparent dig at the Haryana politician who recently said that 90% of the rapes are consensual] but this time I have been ‘raped without consent’. As per IAS (Fixation of cadre Strength), Regulations 2010,  the rules allow me to work in position for 2 years, but this time I was transferred in few months of my joining.

This time all I am saying is ‘this rape is without my consent’. With regulations guaranteeing me a fixed tenure , All I am demanding is that I should be given what I am guaranteed.

See his interview to Rajdeep Sardesai of CNN-IBN:

March 28, 2008: Letter of Intent [LOI] issued by Directory Town and Country Planning Haryana, favouring Vadra's Sky Light Hospitality Ltd allowing change of land use from agricultural and allowing a residential project to be built on 2.701 acres.

June 3, 2008: DLF-Vadra agreement for the sale of this plot for Rs 58 crore. DLF pays first instalment of this "Business Advance" and a total of Rs 50 crores is paid as Advance by 2009 till the sale is registered on Sept 2012

August 5, 2011: Village Shikhopur [Hadbast No 160] in Manesar, of district Gurgaon Haryana is re-notified u/s 14(1) under the East Punjab Holdings (Consolidation and Prevention of Fragmentation) Act of 1948

October 8, 2012: The Hindu publishes a detailed report by Shalini Singh: Behind Robert Vadra’s fortune, a maze of questions

Sale of property on 18.9.2012 during the pendency of the consolidation proceedings without the sanction of the consolidation officer wass against the provisions of section 30 of the Consolidation Act, ibid. The mutation no 4513 sanctioned on 20.9.2012 by the Assistant Consolidation Officer was also without jurisdiction, since he is not a Revenue Officer under the Punjab Land Revenue Act  [see Scribd document below]

October 15: Ashok Khemka cancels mutation favouring DLF and writes: "It is not known what made the Town and Country Planning Department to renew the LOI/licence on January 18, 2011 in favour of the vendor, when 86.2 per cent of the total sales consideration was paid to him by October 10, 2009, that is 15 months before the date of renewal of the LOI/licence."  [See Memo dated October 15, 2012 that follow in the Scribd documents]

Full texts of the letters of October 12, October 15 by Mr Khemka, along with Sale Deed and other government documents

Updated to add quotes from the Hindu and the Business Standard