The Pilgrim’s Progress: Railways To Waive Off Surcharge On Special Trains During Kumbh Mela

Enclosures with tea and water vending stalls, LED televisions or separate toilet blocks for ladies and gents are in the process of being set up at the Allahabad station – the location of this year’s “Kumbh”. 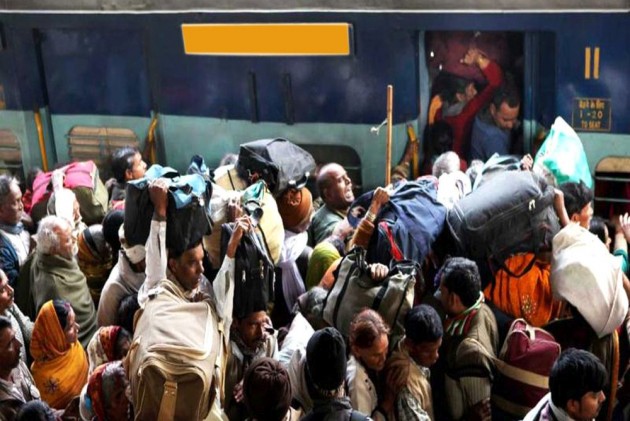 Deciding to absorb an estimated revenue loss of around Rs. 5 crores, the Indian Railways have decided to waive off the routine surcharge on the special trains that will ply during the period of the “Kumbh Mela” (Hindu religious congregation on the banks of river Ganga) from January 14to March 4 next year. Enclosures with tea and water vending stalls, LED televisions or separate toilet blocks for ladies and gents are in the process of being set up at the Allahabad station – the location of this year’s “Kumbh”.

“The Railways are putting in efforts to provide a pleasant and memorable experience to the pilgrims,” Rajiv Chaudhary, General Manager of North Central Zone said. Rather splendid efforts. Begging an answer, however, is this question: When will the Indian Railways turn its gaze towards needs and expectations of India’s other religious groups such as the Jains, Buddhists, Sikhs or Muslims?

Besides special trains that are run on religious occasions for the Hindus, the Indian Railways do not directly provide for such travel packages to minority communities, leaving the field open for private tour operators to book trains for such groups through direct deals with the Indian Railways Catering and Tourism Corporation (IRCTC).

As is the case, minority community pilgrims pay a heavy premium on tickets to travel during the period of a religious congregation. The Railways get a share of these profits. “I paid through the nose last year to travel down to Karnataka during the period of the 'Shrawan Bela Gola' (a ten-day festival of the Jains,” a retired Railways official said.

The point been driven at: The Railways suffer losses in providing for the travel of Hindu pilgrims; but digs into pockets of passengers belonging to the minority community. At the same time, decisions on the announcements on running special trains come at the cost of disrupting the travel plans of other passengers who have booked their tickets well in advance; as many “timetabled” or scheduled trains get cancelled during periods such as the “Kumbh Mela”. The pilgrim trains are also unidirectional as they mostly come empty on their return journey.

The argument is not that the Hindus do not have the right to travel for religious congregations but if the pilgrims are also willing to pay extra for such travel, the cause of the Railways will be helped.

Ending the “culture of populism” had been among the NDA government’s central themes on assumption of office in 2014. Towards the end of the Narendra Modi government’s tenure, substantial changes do not appear to have come about. The Railways continue to provide free passes or concessions to different categories of passengers including freedom fighters, senior citizens and media personnel. Despite the critical state of rail finances, the government has also refrained from the unpopular decision to hike passenger fares. It has also been decided that delegates who will be travelling to Allahabad during this year’s edition of the Pravasi Bharatiya Diwas will get complimentary on-board meals.

Not unusual that the IRCTC – the catering arm of the Indian Railways – has decided to hike prices of water at railway stations by one rupee. What is unusual is that the slow pace of progress in the installation of Water Vending Machines at stations. Of the 7,000 odd stations across the network of the Indian Railways, only 1900 are equipped with the Reverse Osmosis (RO) machines that aim to provide good quality drinking water at a low cost.

The presence of Total Coliform Bacteria (TCB) of the drinking water supplied to passengers from taps at railway platforms have been found to be alarmingly high in repeated tests. All the more reason for the Railways to scale up the plan of deploying RO machines at stations.

At a time when old ways are giving way to the new, it is heartening that the 165-year-old state-owned transporter has finalized what is called the Indian Railways Heritage Charter that provides guidelines for the conservation, preservation, restoration and repair of historic assets. Not many countries have this kind of a charter. But the need for such a document can hardly be underscored in India. Over past decades, India’s rail heritage has been pilfered or been mindlessly destroyed. Only a few of the steam engines of yore have survived. The hanging clocks on platforms, wooden signalling systems, uniforms, caps or manual telephone sets used by the station masters – these have mostly disappeared. The Heritage Charter – issued December 6 – instructs General Managers of railway zones to create a pool of technically skilled manpower to ensure preservation of precious rail assets.