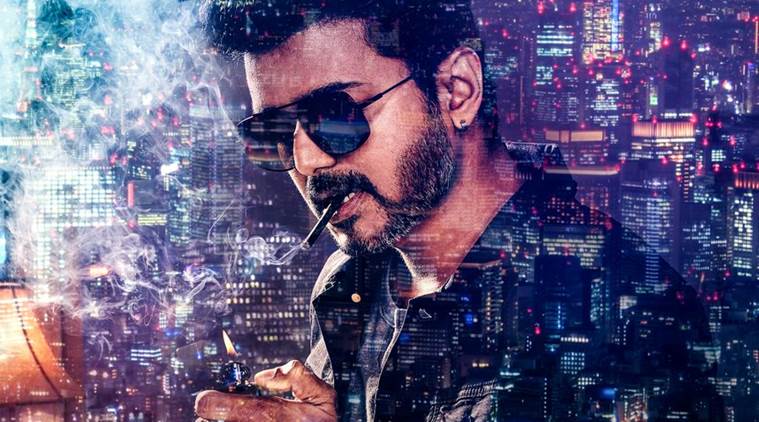 Sivaji Ganesan first, Rajnikanth later and now, the latest superstars of Tamil films, Ajith and Vijay. All have been unofficial brand ambassadors of smoking in Tamil cinema, along with dozens of other stars, of course.

While Sivaji Ganesan died of underperforming lungs and kidneys -- he loved his Scotch along with his State Express 555 -- Rajnikanth reformed, gave up his drinks and smokes after a kidney transplant in the US. He even went on stage to dissuade the youth from smoking and drinking, presenting himself as the prime example of the ill effects of these two habits.

It was ironical, since the same Rajinikanth, by flicking the cigarette on to his lips during the 70s, had made smokers out of an entire generation. Even in his film Baaba Rajnikanth says that while he could give up drinking he could never give up smoking. The then Union Health Minister Anbumani Ramdoss rightfully upbraided the superstar for continuing to promote smoking on screen even though its ill effects had been established by the WHO. “Film heroes, being role models, should not set bad examples for the youth by smoking and drinking on screen,”’ was Anbumani’s logic.

So, in his subsequent films, Rajinikanth switched to chewing gum, thankfully not moving towards Pan Parag or chewing tobacco. But other top heroes of Tamil cinemas such as Ajith or Vijay have not kicked the habit of on-screen smoking in spite of a systematic campaign against it. They even refused to follow the footsteps of Kamalahaasan who had more than a decade ago given up smoking on screen.

So we had Ajith puffing away in films such as Billa andMangaatha while Vijay recently promoted his yet-to-be released Sarkar with a cigarette couched between his lips for the first-look poster. Naturally, it got the goat of Ramadoss who said Vijay would have looked smarter on the poster without the cigarette.

Even as social media users pilloried Vijay for posing with the smoking stick, the state directorate of health issued a notice to Vijay, film director A.R. Murugadoss (of Ghajini fame) and producers Sun Pictures to remove the poster and warning that they could face a jail term up to two years and a fine of Rs.1,000 for promoting tobacco products, under the Cigarettes and other Tobacco Products Act.

The film’s Facebook page and other publicity material on the digital media quickly removed the offending picture after the notice from the health department. Having got off the wrong foot, the film’s producers have also urged the director to cut down on smoking scenes involving Vijay. “What is the use of Rahul Dravid urging movie goers to build a wall against tobacco if ten minutes later the film’s hero, his friends and the villain and his gang are going to puff away for the rest of the movie?” asked film personality Kavithalaya Krishnan.

Anbumani was quick to welcome the action of the state health department by pointing out that Tamil Nadu’s was among the top five states in India in cigarette sales. “When sport persons are openly disassociating themselves from aerated drinks and junk foods why cannot our film stars likewise eschew smoking and drinking in their movies?” he asked. On Mondaythe Madras High Court issued notice to Vijay, Murgadoss andSun Pictures in response to a PIL seeking removal of the smoking pictures from the promotional material andcompensation of Rs.10 crores each, to be paid to the Madras Cancer Institute.

Tamil film stars are finally realising that it is easier to fight villains on screen than lighting up a cigarette.