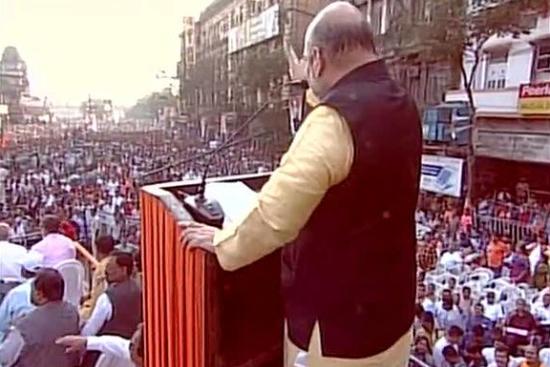 Reading the above tweets, one would be justified in assuming that not only were some mishcief makers distributing 'Al-Qaeda booklets' at Amit Shah's Kolkata rally on Nov 30, but that the police were already on the case with suspects being detained.

What makes the whole thing mystifying for anyone who can read Bengali is that the photo of the 'Al-Qaeda' booklet' that was tweeted as evidence actually makes it clear that far from being 'Al Qaeda' booklets, they seem to be actually the usual BJP/RSS propaganda:

"Will make India an Islamic State
Al Qaeda
Beware of the burqa-clad, burqas, madrasaa and whispers behind the veil of religion. What is being taught there? Read this book and make others read it too."

You will notice that while the first line says that Al-Qaeda wants to make India an Islamic State, the last portion doesn't at all seem like something Al-Qaeda would say about themselves. Or would it?

Why would they want to warn people against madrasas or burqas?

In other words, it seems like a simple case of Islamophobia, where the name of a terror group is used only to drive the idea home and to inflame feelings of mistrust towards a community.

What makes it even more problematic is that senior BJP leaders are quoted as saying:

It only goes to show how these terrorists are under TMC's protection: Rahul Sinha,WB BJP Prez on Al-Qaeda booklets seen at Amit Shah's rally

It shows how much jehadi activists have penetrated into WB: Siddharth Nath Singh, BJP on Al-Qaeda booklets seen at Amit Shah's rally

If not Siddharth Nath Singh, surely the WB BJP President should be able to read the Bangla cover at least, if not the entire booklet?

Yes, we too would love to know who the 'culprits' in this case are and whether the police actually investigate the case and catch them.