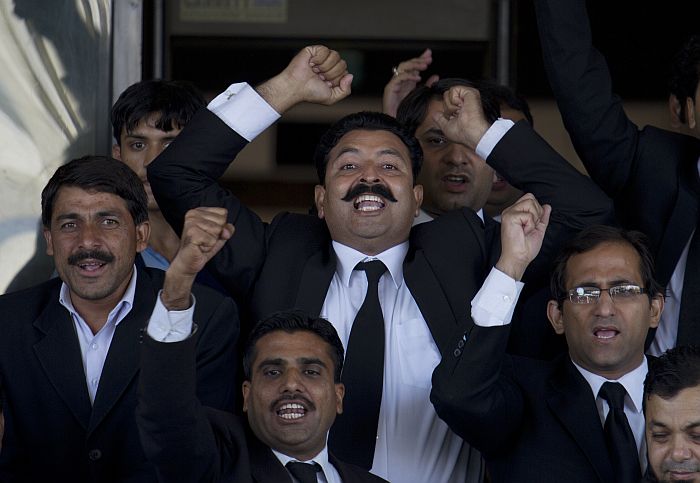 Pakistani lawyers chant slogans in favor of the Supreme Court's decision against Pakistan's Prime Minister, Yousuf Reza Gilani, not pictured, outside the court in Islamabad, Pakistan. Pakistan's top court ruled on June 19 that Gilani was no longer eligible to hold office due to an earlier contempt conviction, ushering in fresh political turmoil in the nuclear-armed country.
- AP Photo/B.K. Bangash

The Chief Justice has now dismissed the Prime Minister of Pakistan. Punditry cannot possibly keep up with this stuff. Last week, Pakistan was in the middle of “Bahriagate”, a scandal involving one of the country’s richest men and the same Chief Justice . Malik Riaz, who rose from minor defence contractor to the position of richest and most powerful real estate magnate in Pakistan, claimed to some journalists that he gave 340 million rupees and several luxurious free trips (including one to Monaco with an unidentified woman) to the son of the Chief Justice of Pakistan, and that he had kept the receipts. His motives for revealing this self-incriminating information remains unclear at this time. The Chief Justice, who had apparently been informed of some of these accusations at least six months ago (and whose unemployed son had been taking the extended family on some rather fancy vacations for the last 3 years), decided to take suo moto notice of these accusations once they became public. After a somewhat theatrical public hearing in which the Chief Justice came to the Supreme Court with a copy of the Koran and quoted liberally from the Hadith and Sunna, he recused himself from the hearing and two of his fellow judges took over the case. Quoting again from the Koran and Hadith, as is now the norm in Supreme Court judgments, the two judges recommended that the competent authorities should investigate and register cases against anyone who may have given or taken any bribes in this matter.

Meanwhile, Malik Riaz held his own theatrical press conference complete with a small copy of the Koran and hinted at improper contacts between himself and the Chief Justice of Pakistan. The next day he also appeared on a television program to tell his story, but the program itself became the story when someone in the TV station released video of the two anchors and Mr. Riaz Malik chatting with each other before the program and in various commercial breaks. While some of the conversation was mundane and some at the level of farce, with the anchors childishly fighting with each other over who gets more air time, some of it seems to indicate that the interview had more than the usual element of pre-planning and media manipulation. This has led to another firestorm of conspiracy theories and wild accusations and another televised full court meeting in which the Chief Justice harangued the chairman of the Pakistan electronic media regulating authority as if he was a minor clerk and ordered him to take action against media organs that were “defaming the judiciary”. Various bar associations have passed resolutions banning the entry of Mr Riaz Malik's lawyer and the Prime Minister's lawyer (who happens to have been the most prominent leader of the lawyers movement that restored the Chief Justice to his position) into their premises. Prominent anchor persons are accusing each other on the record of being in the pay of various domestic and foreign agencies. Fake lists of journalists who got money from Malik Riaz are circulating and are being countered by fake lists of journalists who are paid by the ISI.  And now the CJ has struck and the rumour mills are working overtime trying to figure out what the army wants. In the midst of 18 hours a day of load shedding, and deteriorating law and order, the nation is at least being entertained if not enlightened.

What all of this means and where it will lead I will leave to better informed people to tell us. But this is not the only example of the Pakistani ruling elite tearing at each other in public and waving the Koran at each other. Various organs of the state have been working at cross purposes and publicly accusing each other of treason for several years now. And the theatrics are not confined to domestic affairs. A few weeks ago, Pakistan's former ambassador to the United Nations, senior diplomat Munir Akram, explicitly suggested that the US may face an “asymmetrical nuclear war” with Pakistan if it pushes Pakistan too far; a former director general of the ISI, Lt Gen Assad Durrani, wrote a bellicose piece a few days earlier in which he suggested giving Aafia Siddiqui the Nishan-e-Haider, Pakistan’s highest award for gallantry.  Earlier, famed “deep state” intellectual Humayun Gohar wrote an exposition on the rules of Jihad in which he argued that siding with the US in 2001 was “good Jihad”, but opening NATO supplies now would be a violation of the proper rules of Jihad. Websites and newspapers close to the security establishment regularly suggest that the present elected government of Pakistan and the President of Pakistan in particular are  traitors and CIA agents, and so on and so forth.

All of this has probably happened in other Third World countries at one time or the other, and some of this has probably happened in so-called first world countries as well. But taken together these examples do point to an unusual and dangerous degree of “transparency” in the affairs of the state. The hidden dimensions of power politics are probably unpleasant and nauseating in every state, but the sausage factory can withstand only so much exposure before the  credibility of the state becomes shaky and anarchy threatens. No state, not even Somalia, can withstand a vacuum for too long; someone, somewhere has to take control. What will take control if the current corruptocracy finally falls apart? Pakistan’s army and its remaining supporters like to think that they are always there as the institution of last resort (in fact, they are reputed to help some of the chaos along in order to pave the way for the next takeover). But after several bouts of military rule, it is clear that the Army itself does not have the ability to administer the country or its institutions in any detail. Whenever it does take over, it continues to rely on the karma of the British Raj to operate the rickety apparatus of the state; the various institutions of the state, like the judiciary and the legislative branch, continue to be based on oft-modified versions of the 1935 Government of India Act,  and no matter how outrageously the limits of Western style parliamentary democracy and rule of law have to be stretched, they still have to be kept in place. Mr Sharifuddin Pirzada has been called in by every Pakistani military ruler to provide a fig-leaf of constitutionality and legitimacy to military rule, and every episode of martial law has eventually been forced to revert to a civilian facade . But remember, even Pirzada sahib is getting old.

Every successive military intervention has undermined this system a little further.  And the current circus is rapidly eating away at what is left. If this process continues and the system finally collapses, especially if it transitions without American blessing (something always available, before or after the coup, to past dictators),  the country and its people will have to find a new basis for the distribution of power under very adverse circumstances. If modern Western-style democracy and its institutions are no more, then the next stop is not likely to be the great proletarian cultural Revolution or Noam Chomsky style enlightened peaceful anarchy; the next common denominator is almost certainly going to be an attempt at “Islamic government”, though there may be a short and disastrous hypernationalist episode between the collapse of modern constitutional rule and the emergence of sincere Islamism.

To many people in Pakistan and outside of it, this seems to be a good idea. In principle why can’t the 180 million Muslims of Pakistan finally live under an “Islamic system of government”? But the problem is, there is no there there; no workable blueprint for such a system actually exists or is even half way to creation in the Sunni world.  What the middle class regards as an Islamic system is little more than the vague promises of 6th grade social studies textbooks. To be sure, there are countless versions of medieval Islamic law texts that are available in Urdu bazaar, but nobody has worked out a political or economic system beyond the well-known rules about women and the cutting off of thieving hands.  Various thinkers like Maulana Maudoodi have claimed to update the system while remaining true to its spirit, but his own organizational innovations were mostly Leninist in origin and the generation trained by him remains clueless about political science beyond local gangsterism and the bullying of women and minorities. More than 100 years after these attempts were started, no workable blueprint has actually emerged in the Sunni world. What exists are various versions of modern democracy with a few Islamic personal laws and prejudices grafted on to them in some cases, and plain and simple dynastic rule in all others.

Pakistan's corrupt ruling elite may one day, not too far in the future, find itself in the uncomfortable and unexpected position of getting what they asked for. Quoting Hadith texts and waving the Koran in a Western-style Supreme Court is one thing, actually creating an “Islamic system of government” based purely on these texts from the ground up is quite another. It may be doable in principle, but it is not a task for which our ruling elite is in any way prepared. In a nation with a rather confused creation myth and many divisive problems, this experiment sometimes appears inevitable, but the fact that it has not been put in practice for 65 years should tell us that the real-life exigencies of 21st-century existence are not easily compatible with it. In fact members of the ruling elite are not even capable of agreeing whether the partition of India was based on entirely “secular” or religious notions. To expect them to agree on some sort of modern, competent Islamic rule is a bridge too far.  The best of several bad options would be continue to stagger along with the existing system as economic development and social change gradually transform it and widen its base. But if present behaviour continues they may discover that they have finally got what they wanted. And it will not be what they wanted at all.

“Everywhere we seek the Absolute, and always we find only things.” (Novalis).