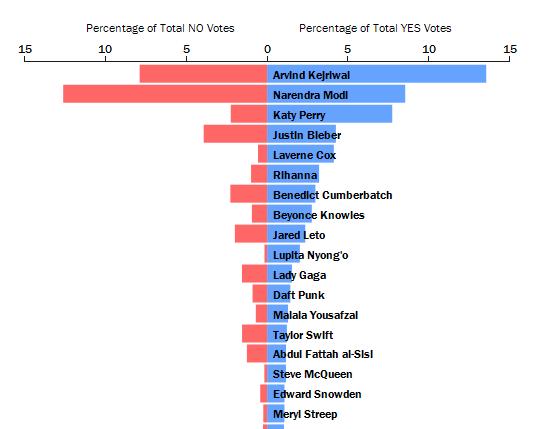 While Time Magazine's “Person of the Year” — one who the magazine editors feel has “done the most to influence the events of the year” — has been making news since 1927, the latest readers poll via the magazine's website which sought to select the world’s 100 most influential people — "who influenced the world this past year for better or worse"— has, to the surprise of many, placed the Aam Aadmi Party chief Arvind Kejriwal and Narendra Modi in top positions.

As the magazine put it:

Indian politician Arvind Kejriwal has won the readers’ poll for the 2014 TIME 100, TIME’s annual list of people who influenced the world this past year for better or worse.

Celebrities like Katy Perry, Justin Bieber and Rihanna ranked high as reader favorites, but the poll turned into a competition between two men competing in India’s ongoing elections.

Kejriwal, who leads the Aam Aadmi, or common man, party, received a total of 261,114 “yes” votes from readers; Kejriwal, a candidate for a Parliamentary seat, came to prominence as the leader of an anti-corruption movement in India. Narendra Modi, the controversial leader of the Bharatiya Janata Party and frontrunner to become the country’s next Prime Minister, brought in 164,572 approving votes.

What is even more significant, however, is that Narendra Modi who was also voted as the most disliked figure in the world, with more people (166,260) voting no as against 164,572 voting yes for him. As TIME notes:

Readers could also weigh in on whether figures should not be included in the TIME 100. Modi received 166,260 “no” votes, outnumbering his total “yes” votes. The poll’s winner was decided by raw number of “yes” votes.

More than 3.2 million votes were cast in the poll. There were attempts to inflate the voting numbers, but only legitimate votes were tabulated for the final results

Please see the full report on the TIME 100 poll at time.com

India's number, however, is projected to touch 243 million by June 2014, according to the Internet And Mobile Association of India (IAMAI), which places the Internet user base in the country at 190 million at the end of June, 2013.

Despite India's #3 rank, perhaps those familiar with the enthusiasm of India's internet users would not be so surprised by the result, because way back in 1999, Amitabh Bachchan was voted "the greatest star of stage or screen by BBC News Online users."

As the BBC had noted then:

Mr Bachchan was voted in by a large margin, pushing Sir Laurence Olivier into second place, followed by Sir Alec Guinness in third.

And in what will perhaps be a surprise to many film and theatre fans, cartoon character Homer Simpson polled in at fifth place, beating Robert De Niro and Marylin Monroe.

Incidentally, in that BBC poll, the only other Indian actor to figure in the top 10 was Govinda, who was placed at # 10.