Topping Charts In Israel, An Arabic Song By Three Sisters 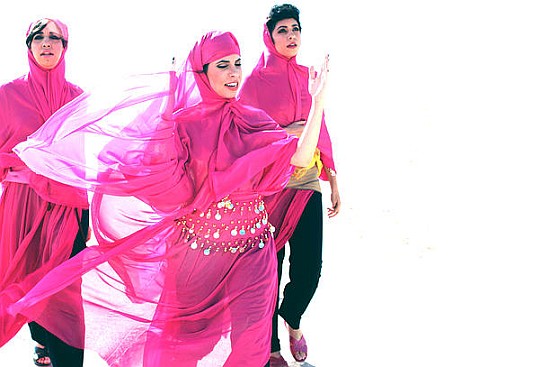 Bridging the gap between Jewish and Arab cultures are the three Haim sisters —  Tair, Liron and Tagel —  from the tiny village of Shaharut, in the desert of southern Israel, who have combined ancient Yemenite melodies with irresistible electronic dance music and hip-hop beats.

The three sisters call themselves "A-Wa" which is the Egyptian Arabic for "Yes" and clearly has a very positive, catchy ring to it.

Not just that, it is for the first time in history that an Arabic song has topped the charts in Israel. A-Wa's hit 'Habib Galbi' is from a genre of songs traditionally sung by women back in Yemen, more like an oral tradition.

"The women in Yemen couldn’t write or read, and they weren’t allowed to pray with the men," Liron says. "So the only way they could express their feelings and emotions were through those songs. It’s all about their anxieties and difficulties."

Their paternal side came to Israel from Yemen which is how the girls grew up listening to traditional Yemenite melodies while their father was fond of Greek music.

The Haim sisters are Mizrahi Jews, which means those who come from Arab or Muslim countries, and have been among the poorest and most disenfranchised citizens of Israel. However the Haim sisters claim that they had a lovely childhood and are now out to claim their Middle-Eastern heritage, in a climate where it has become increasingly difficult to maintain an Arab-Jewish identity.

The Times of Israel did a piece on the Haim sisters, where they recounted some of their influences:

They performed at any opportunity, including Friday afternoons, when the entire family would watch the Egyptian movies on TV (this was before cable and satellite television arrived in Israel). Their mother — who is not Yemenite — would hand them pots and pans as stand-ins for percussion instruments.

Their parents were music lovers; their father was from a Yemenite family but loved Greek music. Holidays were spent with their Yemenite grandparents, reciting piyutim, ancient liturgical poems, and hearing the letter ayin pronounced in a way that's particular to Hebrew-speakers from Arab countries.

But their own musical flavor came from a variety of sources, such as their American-born music teacher at the local regional high school. He was a member of the nearby Kibbutz Ketura, a community with a large contingent of American immigrants. That was how the sisters gained their American-accented English, and accessed singers like Judy Garland and the Andrews Sisters.

The Haim sisters aren't the first Israeli singers to sing in Yemeni Judeo-Arabic, the dialect particular to Jews from Yemen. There was Ofra Haza, who successfully sang in Yemenite as well as Achinoam Nini and other mainstream Israeli singers.

In case, you love their sound, here are some more of their tracks: