'We Are Stuck With A Nut' 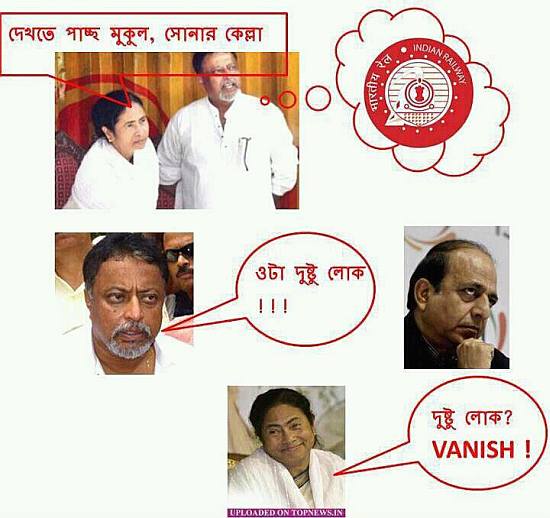 The cartoon that apparently led to the arrest of a Jadavpur University professor (52) along with his 72-year old neighbour, on charges under IT Rules of "intent to insult the modesty of a woman through words and gesture, defamation and dissemination through computer of information that they knew was false but was meant to “cause annoyance, inconvenience, criminal intimidation”"

The photo below depicts a scene from the film, Sonar Kella:

For those not conversant with Bengali or have not seen the Satayajit Ray classic Sonar Kella:

Mamata: dekhte pachho mukul, sonar kella? [Can you see Mukul, the Golden Fortress -- this is actually a dialogue from Sonar Kella a film by Satyajit Ray, which also has a young protagonist called Mukul]

Mukul: otaa dushtu lok! [Here the Mukul is Mukul Roy, the railway minister appointed in place of Dinesh Trivedi, who was forced to resign after presenting the railway budget: That is a bad man!]

"I would advise Ms Banerjee to seek the help of psychiatrists in Calcutta. I would diagnose her as suffering from incipient paranoia. She sees enemies and controversies against her everywhere...She is taking upon herself the responsibility of interpreting the constitution of India when there are far better people than her to do so... All sorts of people manage to come into power these days, from nuts to psychopaths to paranoids... and I am afraid West Bengal has been saddled with a chief minister who seems to be suffering from paranoia...Mamata Banerjee should be advised to dismiss all the editors of all the newspapers and become the editor herself. She should even draw the cartoons herself. Then she would not have any reason to grumble.... We are stuck with a nut."

Activists point out that these arrests today underline the need for annulment of IT Rules 2011. As Pavan Duggal, a cyber law expert points out, unless the prosecutors withdraw the case themselves, even though the charges they are booked under are bailable, the sheer due process is going to be "living hell" for the duo.

In that regard here is the text of a petition put out by SFLC.in:

The Constitution of India provides the citizens of this country the fundamental right to freedom of speech and expression subject to reasonable restrictions as laid down in the Constitution itself. Now, with the spread of the Internet and the availability of tools like blogs and social networks we are able to enjoy this freedom to the fullest and have a true participatory democracy.

You, as legislators recognised the importance of intermediaries like Google, Facebook, Twitter and Internet Service Providers for e-commerce as well as for free expression, helping us to express ourselves and provided them protection from any legal liability that could arise out of content generated by users. Such a protection provided in the Information Technology Act, 2000 was important for these intermediaries to operate freely without threats of frivolous legal action.

Now, the Government wants to impose restrictive, unconstitutional guidelines on the intermediaries via the Information Technology (Intermediaries Guidelines) Rules, 2011 notified in April 2011.

The rules cast an obligation on the intermediaries to remove access to any content on receiving a complaint from an affected person that it falls under the category of a wide, vague, undefined list of “unlawful” content specified in the rules. This vague list includes content considered as ‘blasphemous’, ‘libellous’, ‘grossly harmful’, ‘harassing’, or ‘disparaging’. The rules mandate the intermediaries to decide whether content is “lawful”, thereby bye-passing judicial processes. The rules also allow Government agencies to access personal data of users without any legal safeguards. These rules are violative of our constitutional rights of freedom of expression and privacy and are also against the intent of the Parliament as stated in the Information Technology Act, 2000.

We appeal to you to support the motion for annulment of the Information Technology (Intermediaries Guidelines) Rules, 2011 being moved in the Rajya Sabha and Lok Sabha and to ask the Government to draft new rules which will protect our freedom and privacy.

SFLC.in also has a very brief primer on the IT Rules here. You can consider signing the petition here or write to your MP directly.