An Atheist Himself, Karunanidhi Had Much In Common With Godman Sathya Sai Baba

In 2004, Karunanidhi became wheelchair-dependent after a spinal surgery went wrong and he struggled even to stand up. 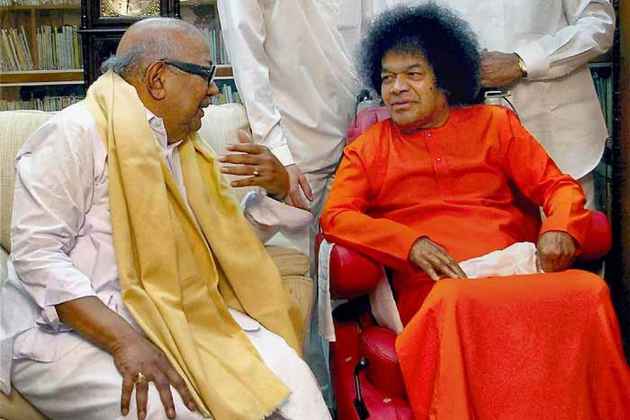 Karunanidhi and Sathya Sai Baba belonged to opposite ends of the social spectrum. The first was an atheist and yet had thousands of followers. The latter preached religion and was seen as an incarnation of god—and he too had thousands of devotees. Karunanidhi used the power of his speech to influence the masses, whereas Sai Baba preferred bhajans and discourses to sway the devout. Both had built large institutions. Karunanidhi used it for political power, while the godman used it for social service.

In their final years the two did share something in common—the powered wheelchair and the specially designed imported van to dock the chair to allow the VVIP sit comfortably and travel securely. This was one idea that Karunanidhi had borrowed from Sai Baba when the latter visited him at his Gopalapuram home in 2007 to inaugurate a drinking water project to which the Sathya Sai Trust had donated a substantial amount.

In 2004, Karunanidhi became wheelchair-dependent after a spinal surgery went wrong and he struggled even to stand up. And during that year’s Lok Sabha elections he had to be physically lifted out of his car before being placed on the regular wheelchair. It was a distressing sight. Thankfully for the non-believer the solution came through a godman.

The powered wheelchair and the special van, with its hydraulic mechanism to smoothly lift the chair in and out of the vehicle, followed. Karunanidhi became inseparable whenever he ventured out. For the average DMK worker the sight of the leader, even at this age, breezing in and out of the van with a smile and wave was a spectacle to behold. It underlined that one cannot keep the tireless Karunanidhi tied down, whatever his handicap.

The wheelchair-bound Karunanidhi realised the importance of the ramp as he was wheeled up the dais for public meetings. He quickly ordered that all new government buildings must have a ramp and an elevator. Even existing buildings should build a ramp for wheelchairs. He reserved three per cent of seats in government jobs for the physically challenged. Having overcome his own disability he reached out to those who were struggling to battle theirs. That would remain one of his lasting legacies.