Who Should Be NDA's Prime Ministerial Candidate? 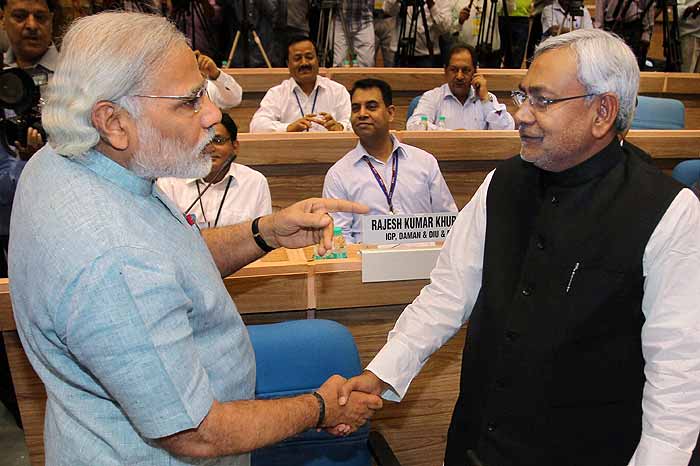 The NDA is unable to come up with the name of an acceptable name for the presidential contest against UPA's Pranab Mukherjee. The Bihar chief minister has set the cat amongst the pigeons by bringing up the question of who should be NDA's candidate for Prime Minister instead. It should be someone secular, he feels, and Bihar's deputy CM, BJP's Sushil Kumar Modi agrees. So never mind the presidency, who do you think should lead the NDA in the next Lok Sabha elections as its PM candidate?

Excerpts from Nitish Kumar's interview to the Economic Times:

I have explained my preference for the leader. We have projected our prime ministerial candidate in every election since 1996. Atal Bihari Vajpayee was the NDA's prime ministerial nominee in 1996 and 1998. The alliance projected Atalji again in 1999 and 2004. And it was Advaniji in 2009. The NDA will have to declare its nominee. The electorate should know who they are voting for and who will lead the country. The NDA should have a leader who can feel for the underdeveloped states like Bihar. It should not be someone who can develop developed states, but who has a feel for underdeveloped states.

Do you think it is already time for NDA to name its candidate for the 2014 Lok Sabha polls?

NDA should declare its candidate in advance. This leader should be acceptable to every constituent of the alliance. To me, the leader of the coalition should have secular credentials. It should be someone who has absolute faith in democratic values. In a multi-religious and multi-lingual country like ours, the leader should not have rough edges in his personality. An alliance can win the confidence of the people only if the leader is seen as accommodating....


You have declared Bihar out of bounds for Gujarat chief minister Narendra Modi...

BJP has capable leaders in Bihar to lead the alliance's campaign. We have been doing it since 1996. We don't need external assistance. We have bettered our performance in every election since 1996. I have cordial relations with Bihar BJP. But if someone is bent on spoiling this relationship, I cannot help.