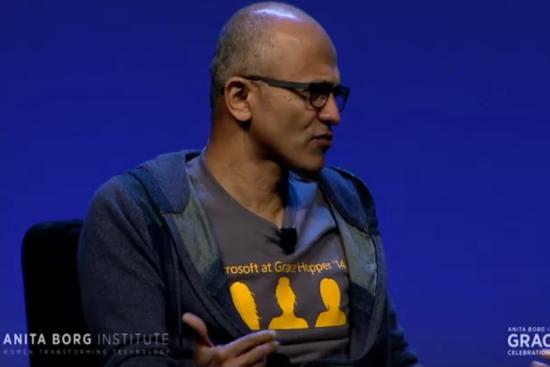 When Satya Nadella, the chief executive of Microsoft, spoke at the Grace Hopper Celebration of Women in Computing in Phoenix, USA, he probably thought that he had the women audience already charmed by telling them they possess “superpowers.”

But then he went on to suggest that women who do not ask for more money from their employers would be rewarded in the long run when their good work is recognized.

He was responding to a question from Maria M. Klawe, the president of Harvey Mudd College and a Microsoft board member, in which she asked him for advice for women who are uncomfortable seeking promotions and career advancement.

Mr Nadella said his own thinking on the subject had been influenced by Mike Maples, a former Microsoft executive, who had a memorable saying about how human resources systems were inefficient in the short term and efficient in the long term:

Dr Klawe politely told him that this was "one of the very few things I disagree with you on,” which evoked a round of applause from the audience and went on to describe her discomfort negotiating her own salary when she was offered the position of dean of engineering at Princeton.

She said she began discussing her salary only after accepting the job. The result, she estimated, was that she received about $50,000 less a year than she should have. She said she had also handled her pay discussions with Harvey Mudd poorly—she did not protest when she was offered less money than she thought appropriate.

“Do not be as stupid as I was,” she said

That the comments were made supposedly in a celebratory event for the tech industry—Microsoft has sought to support organizations that encourage women to study technology in college—lauding it for working toward diversifying its work force made it specially ironical.

The backlash on—where else, but Twitter?—was swift and brutal, forcing Mr Nadella to backtrack from his comment:

Was inarticulate re how women should ask for raise. Our industry must close gender pay gap so a raise is not needed because of a bias #GHC14

Thanks for the feedback – further thoughts here: http://t.co/VbKkvsuv1N #GHC14

A Microsoft spokesman helpfully added that Mr Nadella's other commitments, immediately after he left the stage, prevented him from clarifying his remarks earlier.

An email followed to Microsoft employees:

From: Satya Nadella
Sent: Thursday, October 9, 2014 5:24 PM
To: Microsoft – All Employees (QBDG); Retail: All FTE
Subject: RE: Empowering Others

All – Today I was interviewed on stage by Maria Klawe at the Grace Hopper Conference – I encourage you to watch the video [from around 1:35 onwards--Ed.]. It was great to spend time with so many women passionate about technology. I was honored to be a part of it and I left the conference energized and inspired.

Toward the end of the interview, Maria asked me what advice I would offer women who are not comfortable asking for pay raises. I answered that question completely wrong. Without a doubt I wholeheartedly support programs at Microsoft and in the industry that bring more women into technology and close the pay gap. I believe men and women should get equal pay for equal work. And when it comes to career advice on getting a raise when you think it’s deserved, Maria’s advice was the right advice. If you think you deserve a raise, you should just ask.

I said I was looking forward to the Grace Hopper Conference to learn, and I certainly learned a valuable lesson. I look forward to speaking with you at our monthly Q&A next week and am happy to answer any question you have.