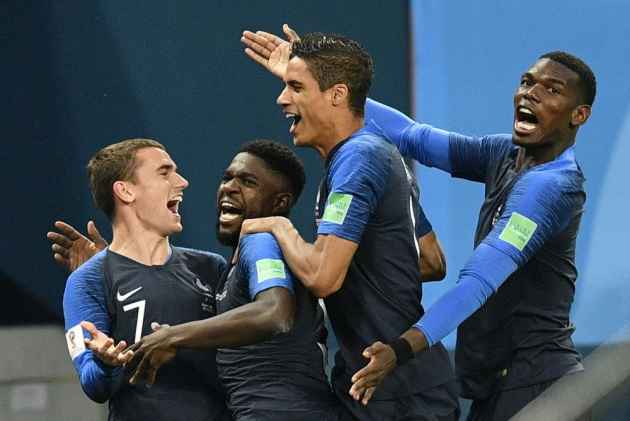 In a high energy game where two of the strongest teams on paper faced off, Les Bleus ran out victorious thanks to a towering header from Umtiti to beat Courtois. Varane was a rock in defence, while Matuidi and Pogba won the midfield battle. This is what edged France for a win in a closely contested high-quality matchup. Missed the game? Don’t worry, here is your roundup of the first semi-final of the game.

On a day where his defensive partner will grab the headlines for scoring the winner, Raphael Varane quietly marshalled the french backline, arguably putting in his best defensive performance so far. People tend to forget how devastating the Belgian attack can be. Lukaku tore the Brazilian defence apart, but was nowhere to be seen against France. Kevin De Bruyne started brightly, but soon faded away as his chips and passes seldom found their targets. The only bright spark in the Belgian attack was Hazard, who caused French right-back a multitude of problems, but every time even Hazard tried to involve one of his central teammates from the byline, Varane was there to clean up. Defenders almost always seem to lose out in football, they are the ones who do the scrubby work behind the scenes which enables the starry attackers and midfielders to shine. We won’t see Varane or any other centre-back walk away with a golden ball anytime soon, but last night’s performance from the centre back deserved a man of the match award at the very least.

A few hours before the game started, Adidas football released a video featuring Zidane talking about the importance of the midfield in the game of football. “The one who wins the midfield, wins the game”. It’s safe to assume Belgian coach Roberto Martinez didn’t have a look at that video as he pitted Marouane Fellaini, a distinctly average squad player at Manchester United, against Paul Pogba, Manchester United’s most expensive player of all time. What followed was obvious and rather predictable. Pogba dominated every angle of the midfield battle, and even though Belgium dominated possession, much of their time on the ball was spent switching it from one side to another in defence. Moussa Dembele was anonymous throughout the game, and Belgium really lacked the bridge between defence and attack. Paul Pogba and Matuidi did that brilliantly for France, and it was obvious as they had far more clear cut chances than their opponents despite being beaten on possession.

Yes, the most important incident probably happened before the game. The five-time ballon d'or winner Cristiano Ronaldo announced his departure from Real Madrid, leaving a major void in Real Madrid’s attack. While it may have been a mere coincidence that two of the touted replacements for the portuguese attacker were playing today, their performances were probably more than that. Julen Lopetegui, the new Real Madrid coach, and Florentino Perez, the club president, would not have found any answers last night as both Mbappe and Hazard put in stellar performances for their respective sides last night. PSG are yet to be sanctioned by Financial Fair Play, as they may have flaunted some rules in their 400 million euro double swoop for Mbappe and Neymar. This leaves Mbappe’s future a little uncertain, but his performance lacked anything but certainty. He began the match fired up as he made a winding run from kick-off, before creating two wonderful chances for Giroud and Pavard, which each of them failed to put away. Hazard, on the other hand was arguable Belgium’s best player, and has had a love-hate relationship with his club Chelsea for a while now. While Mbappe would be a more expensive but more long-term investment at the age of 19, Hazard is a proven attacker having won multiple honours with Chelsea and also winning PFA player of year in 2015. It remains to be seen which one of them Real Madrid tries to sign, if not both.

With that, we have our first finalist, as France showed the grit at the back and desire up front to grind out a win against a talented Belgium side. With such a talented attack, fans and pundits alike expected Les Bleus to blow defences apart this World Cup, and they have fallen well short of doing that. Deschamps has rather instilled a balanced colour to the side and that seems to have worked, as they have kept the most number of clean sheets in the tournament and now find themselves in the final.