Read this and you should know enough to sound like a seasoned football fan. 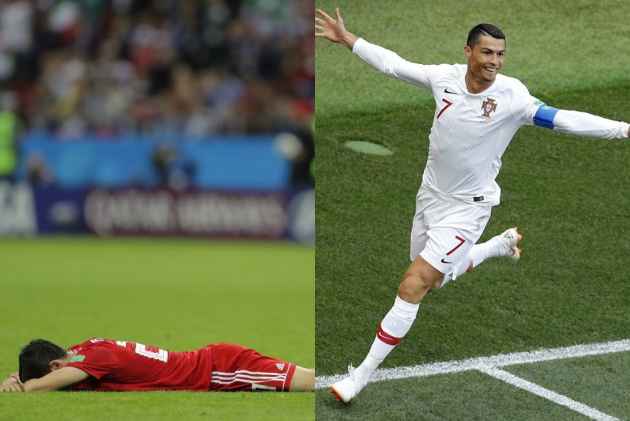 The World Cup is here, and it’s all everyone wants to talk about. Feeling left out of the conversation? Read this and you should know enough to sound like a seasoned football fan able to pick up on the best performance of the day, a key result, and a moment that stood out. Without much ado, here is your definitive round up to Day 7 of the FIFA World Cup.

Public enemy number one, the Brazilian born striker who chose to represent Spain was the difference as Spain beat Iran 1-0 to stay level with Portugal who beat Morocco with the same score. Iran produced a defensive masterclass in the first half as they had six men behind the ball at all times and frustrated a Spain side which struggled to find their swagger against a resolute back line. Despite having a staggering 80% of the ball, La Roja managed only one shot on target in the first 45 minutes. Costa didn’t let that get to him though, as he kept making runs and drawing fouls, and played the kind of mind games that he’s developed a reputation for over the years. In the 40th minute, he stepped over Iranian goalkeeper Beiranvand’s toe, and kept at it throughout the frustrating 45 minutes. His hard work paid off in the 53rd minute when he beautifully turned away from the Iranian defence, and slotted in a ricochet shot into the back of the net. Iran nearly equalised, but their goal was ruled offside through VAR, and it remains extremely tight at the top of Group B between Spain and Portugal.

The same Saudi Arabia side that got absolutely battered at the hands of Russia put in a much improved performance against the South American side. It was in vain, though, as La Celeste found their winner from Luis Suarez who scored in his 100th appearance for the national team. This win qualified both Russia and Uruguay to the Round of 16, and helped Uruguay keep up with Russia on points. This sets us up nicely for a battle for the top spot in the final round of group stage fixtures, as Russia take on Uruguay. Meanwhile, Egypt will play Saudi Arabia in a bid to avoid finishing rock bottom of the group, and should Saudi Arabia perform like they did against the South Americans, it would be interesting to see who wins that clash.

This goal was significant both in terms of the World Cup and the history books. Portugal were dominated for large parts of the game as their goal was peppered with 13 shots from the North African side. Therefore, Ronaldo’s goal in the 4th minute meant Portugal had something protect and ensured they had a chance to finish top of the group. Morocco were very wasteful with their chances, especially Mehdi Benatia as he was presented with a number of chances from set pieces. Ronaldo’s goal also moved him to 85 international goals, one clear of Ferenc Puskas, making him the leading European international goalscorer. It also ensured his purple patch continued as he now sits on top of the scoring charts with 4 goals from 2 games. He will surely be eyeing the golden boot, but also be looking at some of the records in the World Cup. Miroslav Klose holds the highest number of goals in World Cup with 16, while frenchman Just Fontaine holds the record for the highest number in a single tournament with 13 goals from 6 games. Should the Portuguese Captain get to the 13 goal mark this World Cup, he would automatically equal Klose’s all time record. This way, even if he can’t carry this Portugal side to the trophy, he will ensure his name at least goes down in the World Cup history books.

Day 7 surprised us by not springing any surprises, which seemed to have become the norm for this World Cup. Three traditionally strong sides won with slender scorlines against relatively weaker sides, and 3 sides (Morocco, Egypt, Saudi Arabia) have already been knocked out of the World Cup, while Iran face the tough task of having to win against Portugal to go through to the next round. It seems like a return to normalcy in an otherwise topsy-turvy World Cup. There is still lots to fight for in both Group A and B, however, with the top-spots still there for the taking, and Iran will be hoping they still have a surprise left in them to steal a qualification spot from the European heavyweights Portugal.