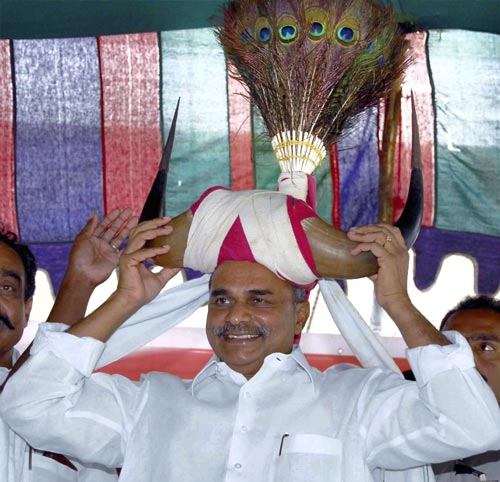 Even to his many detractors, the untimely and tragic demise of AP Chief Minister Y.S.Rajasekhara Reddy (YSR--Telugus are fond of three-letter English acronyms for some reason), along with two helicopter pilots and two aides, must come as a shock. The web, airwaves, and print media are filled with obituaries and tributes, all sounding very similar themes. Principally, YSR is credited with being a successful politician with grassroots appeal, and for implementing a number of welfare schemes, especially in the area of healthcare access, which appear to be functioning reasonably well.

His political success as a grassroots Congress leader is especially remarkable, given the AP tradition of senior Congress leaders who, almost without exception, made an infantile subservience to the High Command their sole qualification for high office; if they failed to obtain the Chief Minister's post, these leaders would seek to make the state ungovernable by anyone else, by engineering riots or perhaps a violent agitation. There was always a premise that the Congress High Command did not look kindly upon strong state leaders who were competent and popular in their own right, but will placate those who throw violent tantrums.

Given this climate, for YSR to have succeeded in balancing his personal power in the state with what is from all accounts an excellent relationship with the High Command, while taking his rivals along, speaks of a high degree of political astuteness and skill.

He also deserves special appreciation for taking steps to improve public access to health care, including emergency services. The ubiquitous presence of ambulances, and the increased use of modern hospitals and clinics by the poor, speaks of an interest in improving health matters on the part of the late Chief Minister who started out as a doctor. Because this has historically not been a widely-shared interest among the numerous doctor-politicians and doctor-businesspersons who populate the upper echelons of the state, YSR's death gives rise to concerns as to whether these nascent services are doomed to stagnate and perish from entropy, or whether they will grow into a serious policy of delivering measurable and accountable health services to all.

But, although subdued among the encomiums, there are also grumbled allegations about YSR's amassing of illicit wealth (Rupees 22,000 crores is one of the figures bruited about), his vindictive pursuit of political and business rivals, and insinuations about his involvement in a kind of global evangelical Christian project (YSR himself was a Christian, as it happens) to systematically Christianize AP, as a part of building a deeper institutional and cultural relationship with America's political economy.

None of these allegations have been properly investigated, let alone verified. He and his family have well-known business interests, and it is hardly worth pretending, just for the sake of good form, that these businesses don't benefit from the political power of the paterfamilias. During its previous innings, the YSR government's dogged pursuit of alleged irregularities in rival Ramoji Rao's business dealings had a strong smell of vendetta, and there have been darker mutterings about YSR in connection with certain murders that took place at the politician-gangster intersection. There also appears to be some slight evidence as to the existence of a nexus of corruption between dubious American politicians backed by that country's shadowy Christian evangelical institutions, and some of the upwardly-mobile noveaux riches of Andhra Pradesh. I have been shown flyers purporting to be from one of the prominent Christian preachers now such a common sight in the auditoria of Hyderabad, in which access to specific American politicians, and thereby untold lucre, is offered in exchange for support in this individual's evangelical endeavours in AP.

Given the mafia-style operation of India's politics, I am inclined to think that, if there are shady deals involving serious amounts of money going on, any competent politician worth his salt will have a finger in the pie, and surely a political superstar like YSR would not have been an exception in this regard. Safeguarding India's political and cultural independence, and the desirability of finding more constructive ways to engage with Americans, and so on would not enter the calculations at all. Be that as it may, it is unlikely that YSR's passing will make any significant difference to such corrupt enterprises. After all, global conspiracies that depend on one man can't amount to very much.

As for the politics of venality, vendetta and murder, it is clearly an institutional problem not of YSR's creation, and is not going to end with him. It will remain and flourish, with no one paying serious attention, as long as all allegations and exposures in this domain fail to be objective, and remain tainted with ulterior political and ideological motives.

This accounting leaves us with a politician who garners our admiration, because, like a sports star or an artist, he was good at what he did, regardless of personal qualities and the foetid environment in which he operated. If that were all, surely it would still be high praise, but, as with the usual flash-in-the-pan Indian sports stars, it would mean that his arrival and departure were mere transient events with the departure leaving no historic impact on the culture. That would be a depressing thought, whether you are a member of YSR's grieving family, or just an average Telugu person who has just lost the political chief of his people.

Fortunately, there is one aspect of YSR's personality and career that mitigates the pain of transience and ultimate insignificance, and raises him to the level of a special individual whose loss is actually poignant for the people. It is the role YSR played as a champion of a united Andhra Pradesh.

Perhaps more so than with other large states, the idea of a unitary Telugu state is a deeply emotional matter and arouses strong passions on both sides of the question. As the first-ever linguistic state, the formation of Andhra Pradesh was achieved with a great deal of struggle, and represented the dream of uniting under one roof, as it were, Telugu people that were separated for centuries by the course of history. That same historical separation also gave rise to a powerful narrative of regional victimization and discrimination. In 1969, the late Dr. Marri Channa Reddy a senior Congress leader politically rusticated by a conviction for electoral fraud, kept his political career from oblivion by leveraging this sense of victimization into a violent separatist agitation for a Telangana state, in which victimization morphed into chauvinism that spawned a fascist-like targeting of Hyderabadis originally from the coast. This agitation was followed a few years later by another one, just as violent, for a separation of the coastal Andhra region. The latter agitation never rose to the status of a movement, and is not a factor today. As for Telangana, once Channa Reddy's political future was assured  and other adjustments of political patronage made by the Congress High Command, the agitation ended and the separate Telangana movement became dormant.

Until, that is, the advent of another disgruntled Congress party leader and sometime minister, K. Chandrasekhara Rao (KCR) a few years ago. Perhaps feeling frustrated by the success of the vastly more intelligent and competent YSR, KCR  set about reviving the embers of a separate Telangana movement and assembled a coalition of similarly disaffected mainstream politicians, NRI and local businessmen, and naxalites sensing an opportunity to regularize their by then de facto dominance of much of rural and mofussil Telangana. KCR's early rhetoric in his speeches on Telangana ranged from merely overwrought all the way to psychotic-fascist, threatening Hyderabad residents hailing from coastal Andhra with mass slaughter. (Compared with him, Channa Reddy in 1969 was a model of prudence and sober and dignified expression.) As this was during the time Telugu Desam was in power, it no doubt seemed to Congress like a possible winning formula for gaining Telangana at the next polls, and I suppose the political calculation was that the nasty rhetoric could only help. In any case, the Congress High Command made receptive noises to KCR's demands, saying neither yes nor no, doubtless counting on the power and stature of Sonia Gandhi to check any urge on the part of KCR's Telangana Rashtra Samiti (TRS) faction to get out of control.

Congress's electoral fortunes changed in 2004, and YSR became Chief Minister. KCR intensified his demands, and his tone grew in petulance. There were occasional resignation dramas, challenges were hurled and so on, but under YSR, it never amounted to much. YSR smiled and stalled, even as he apparently instigated his underlings to heap contempt on KCR and his TRS. As the 2009 elections approached, both Telugu Desam and the BJP, looking for an angle in Telangana, decided to embrace KCR, gambling that their gains in Telangana will outweigh any losses in the coast and in Rayalaseema.

In the elections, YSR defied the pundits by leading Congress to a comprehensive victory, and in the process reduced KCR to political irrelevance, at least for this electoral cycle. Throughout this drama, we see YSR bringing his superior political skills and his rapport with Sonia Gandhi and the High Command to bear on KCR, a lightweight in comparison. The outcome has been that the demand for Telangana state has taken a back seat. Whatever one's actual position about a unitary Andhra Pradesh state, those favouring stability must give thanks to YSR for averting a split of Andhra Pradesh at this particular juncture, considering the calibre of the individuals driving the movement.

Politicians like YSR don't fight battles like the one over Telangana for emotional and sentimental reasons. Even if he calculated that he and his friends and family are better off ruling a larger unitary state than a smaller one, I would still like to imagine that a genuine attachment for Telugu and the  unity of Telugu people was a factor somewhere in the scheming brain of the late CM. For one thing, he was an outstanding and fluent speaker of Telugu, probably the best since the late N.T. Rama Rao. That is no ordinary thing to Telugus who have had to suffer through recent politicians stumbling and mumbling their way through a mix of not-quite-mastered English and not-quite-remembered Telugu. There is no doubt that YSR was fond of Telugu and probably in his own way, fond of the Telugu people as well.

For AP, the future may bring YSR's son, or some Congress time-server as Chief Minister. The state may get lucky and get another talented and experienced Congress leader, though that would not be a safe bet. In any event, all it will take is one electoral reverse for Congress, or a re-energized Telugu Desam or BJP to bring the Telangana demand back to the forefront.

And this time, there would be no YSR, with his combination of political skills and state-wide stake, to outmanoeuvre the challengers. God forbid that KCR and his associates would be able to translate his violent rhetoric into reality, but if there should be a conflagration or fascist nightmare in Andhra Pradesh, history would record YSR as the last modern monarch who safeguarded a stable and united Telugu land.