While the food is nice, the atmosphere is brilli­ant. 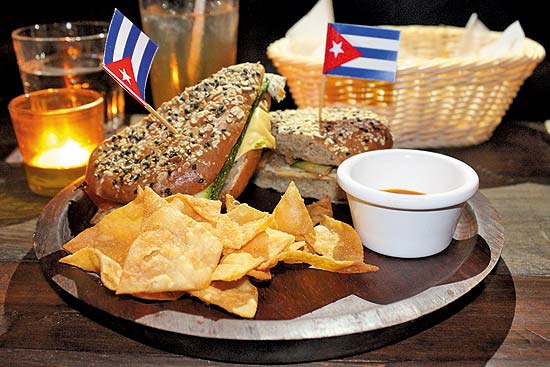 Apologies are due. The Havana Cafe and Bar is one of those places where it’s a disadvantage to read a review written by a teetotaller, for it’s a new Mumbai nightspot. The tables sport pink dri­nks topped with che­rries, and rums bedecked with apple slices. But we are here for the food. And an hour later we agree that while the food is nice, the atmosphere is brilli­ant. A steep woo­den sta­­i­rcase leads to the large, high-ceilinged lounge and bar. The walls are a distre­ssed brick red, ador­ned with cheesy-vintage pos­ters of old Hollywood flicks like Moonlight in Havana and Girl from Havana; black-­and-white pictures of that city; and paintings of...Che. Pastel-painted pillars, old fans, vintage flooring and a stone fountain add to the mood. During the day, Havana has a snacky menu. But at lunch it offers a value-for-­money buffet (Rs 500 per head). The spread includes soup, salads—some South American, some Italian and some Middle-Eastern—and hot cubano sandwiches made to order. The roast chicken and toas­ted tortilla salad was pac­­ked with fresh vegetables and flavour. The caramelised apple and zucchini salad was sweet and unusual, as was the roa­sted pumpkin salad tossed with barley and baby tomatoes. The pineapple and watermelon chunks dressed with ginger were refreshing, as was the cucumber and pom­egranate salad. So it was unfortunate that the chicken and leek soup should be luk­e­­warm on arrival, and that the breads and bruschettas were stale. By contr­ast, the Grilled Fish Cubano with mustard was warm, fresh and delicately flavoured. While the Chicken Nugget Cubano came with a zingy salsa and ple­nty of melted cheese. As were the mini mou­s­ses and eclairs on offer as des­­sert. And the superb lemon and berry Iced Teas (Rs 75). If we return it will not be for the food but for the high ceilings, the creative decor and the coasters that promise: at Havana when you can’t find a party you throw one.