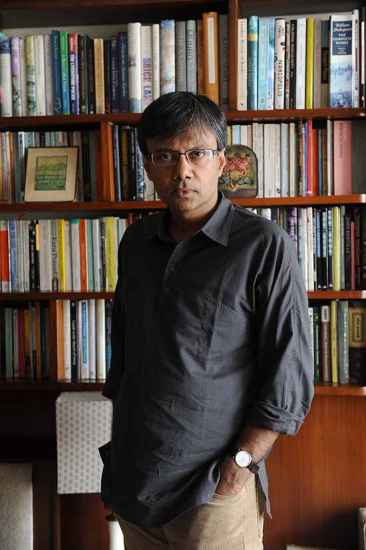 My turning 18 and the twentieth century reaching 1980 coincided almost exactly, except that I was born in May and 1980 was born a few months earlier. I sensed that something was happening to the world. I was changing too. I had become, since the age of 16, abnormally solitary. When I was 16, I was still content in the glow of having emerged from my board exams unscathed in comparison to how badly I’d been doing two years earlier. I had joined Elphinstone College for junior college and to pretend that I was 18 years old. In the process, I’d taken up other kinds of charades and performances: of plunging into the role of the American folk singer, hunched over his acoustic guitar; of being an intensely unhappy, unapproachable poet who was passing through a phase, in his work, at once austerely Beckettian and obscurely allusive. Then, via programmes like Pratibha ani Pratima on the Marathi channels (I was growing up in Bombay), I discovered Indian classical music—vocal music. As a fairly recent listener, I’d never strayed very far from Ravi Shankar. Now it seemed I was finally ready for the impact that singing would have on me—D.V. Paluskar, Kishori Amonkar, Kumar Gandharva, Pandit Jasraj, Kesarbai Kerkar, Vishmadev Chatterjee, Salamat Ali Khan, and the ethereal, androgynous voice of Balgandharva, the singer of natya sangeet. I began to learn Hindustani classical music from Pandit Govind Prasad Jaipurwale—riyaaz was a punishing routine, largely self-imposed. It took up much of my day by the time I was 18. I still played the guitar, but I was close to laying aside that instrument with a sort of irrevocable finality, letting it be for three decades. By now, I’d also convinced my father that I’d drop out of college and take up A-levels, instructed by an unseen, nameless tutor at a correspondence course school in Oxford called Wolsey Hall. I stopped going to college, saw less and less of my friends, and then not at all. My only companions were my guru’s brother-in-law, Pandit Hazarilal, who played the harmonium with me, and his brother, Pandit Girdhar Prasad Jaipurwale, an exceptional tabla player; my parents, whom I was rediscovering, as if I hadn’t known them previously; a couple of my parents’ friends whom I, in my peculiarities, felt comfortable with; and the people who worked in that huge flat in Cuffe Parade, especially Bai and Charlie. My favourite poet was Baudelaire, his stark antinomies and sexual malaise speaking to my spiritual and hormonal metamorphoses; but I was also thoroughly taken with Meerabai, Tulsidas and Chandrasakhi (whose bhajans I was being taught by my guru), for the way they claimed to have endured many ignominies, including that of being born yet again into the world, for the sake of their adoration of Hari. I tried my hand at becoming one of them, and composed a few bhajans in Hindi. I too appeared to be suffering some obscure ignominy for an undisclosed reason. And the world was changing, my fate and ambitions obliquely, and ironically, tied up with its. If someone had predicted to me then that there would be no Soviet Union in a few years; that the novel, rather than poetry, would become synonymous with literature; that Hinduism would swiftly become available only as Hindutva; that writing would one day be defined almost entirely by commerce rather than imaginative or formal achievement; that, in my mid-forties, I’d pick up the guitar again, I would have been sceptical, and not believed them.