According to blabbermouth Bedi, she lost because her Krishna Nagar constituency lacked clean parks! 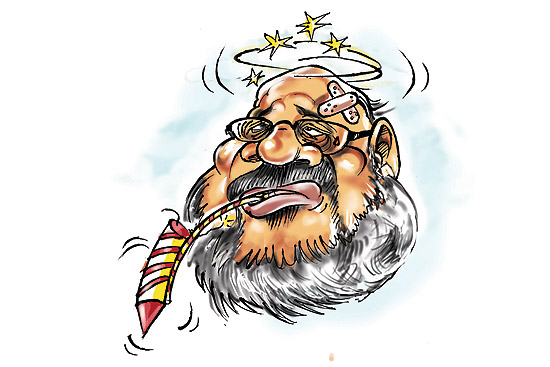 This diary page was almost not written. NaMo bhai wanted to write it because we had been together in so many things and he felt we had swum together, so we should also sink together after the Delhi fiasco. We were arguing on this but were interrupted by Baba Ramdev and Sadhvi Niranjan Jyoti, famous for her “haramzaadon” remark, who began an argument on how and why we held the wedding reception of my son at the YMCA Club Ahmedabad where I am writing this from. Weren’t there any clubs in NaMo’s Gujarat with a more patriotic name? Then came the telephone call from (who else) Kiran Bedi, who has the habit of interfering in everything. She wanted to do the secret diary. That woman! I just don’t know how I and NaMoji asked her to contest the Delhi assembly polls! Well, we live and learn!

So many twists and turns, the jollity of son Jay’s wedding was ruined. Deliberately or otherwise, some of the guests waved placards with the figure ‘3’ emblazoned on it. For us in the BJP, ‘3’ has become an inauspicious number forever. As boys in the wedding hall began to puncture the huge, decorative balloons, I asked them to stop. The party’s huge balloon had been well and truly punctured in Delhi! The BJP giants who had landed from Delhi talked in hushed tones and our New Delhi stalwarts would not raise their eyes. Yet I heard someone whistling, “Jo hoga woh hona hi tha.” It was Delhi BJP leader Dr Harshvardhan who had won the Kiran Bedi seat for us by a margin of nearly 40,000 votes in the last poll. Ramdev finally distributed some of his famous ‘churans’ and that lightened the mood a bit.