An Ethnology Of The Broom

Myths and fables, 150 kinds of brooms, a museum for the lowly jhadoo is as an eye-opener 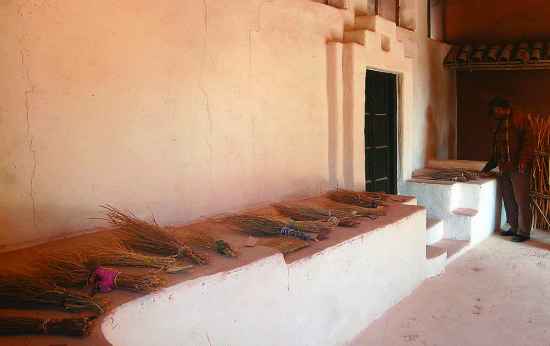 Most people would assume that the Aam Aadmi Party (AAP) got it dead right in their choice of the jhadoo as election symbol. It’s endearing not just in its capacity to signify a much-needed clean-up but also in its reach among primary users—the marginalised who sweep to earn a living. But the broom they have chosen as their symbol, it turns out, isn’t pro­l­eta­r­ian enough. Unlike AAP’s jhadoo which is made with coconut fronds, Dalits make theirs using stiffer bamboo twigs for it has to be more durable and adaptable to dry and wet surfaces.

“In that sense, the AAP’s symbol doesn’t quite penetrate down the caste hierarchy of brooms,” jokes Kuldeep Kothari, secretary of the Jodhpur-based Rupayan Sansthan. How else could one discover such interesting anecdotes but on a visit to Arna-Jharna (literally ‘forest with a waterfall’), a museum formed in 2007 and managed by the sansthan that includes a permanent exhibit of around 150 brooms collected from across the state. Con­ceived by his father and renowned ethnolo­gist, the late Komal Kothari, Arna-Jharna is a celebration of existing folk traditions and des­ert lifestyles, not a consecration of the ‘dead’ past. Over 70 per cent of the brooms exhibited have been collected from actual users (their provenance is even mentioned in the tags).