The Hindu right’s hijacking of Swami Vivekananda must be challenged 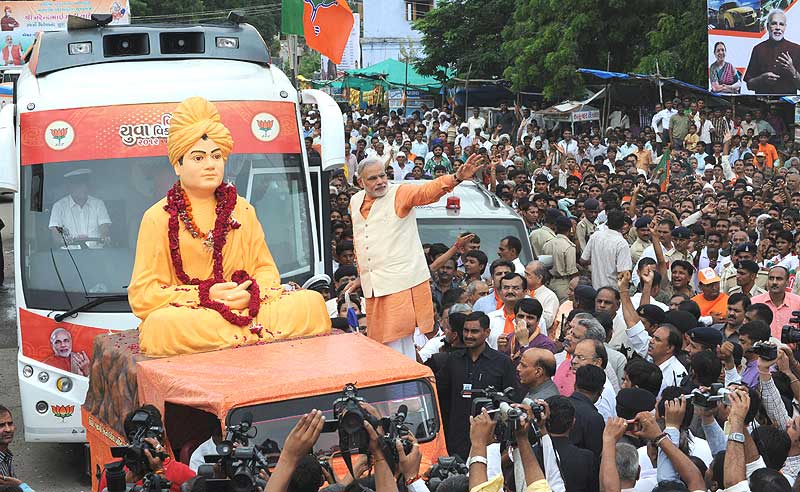 Narendra Modi kicked off a recent  rally with a Swami Vivekananda statue adorning his campaign vehicle. A large number of his supporters sported images of Modi and the great seer on their shirts. This symbolic appropriation ought to have embarrassed Modi.

The philosopher Ramachandra Gandhi’s Sita’s Kitchen: A Testimony of Faith and Inquiry famously recalls an episode: “Swami Vivekananda was in Kashmir towards the end of his life but his heart was heavy even in that paradise on earth. Large-hearted though he was, he felt tormented by the fact that successive invaders had desecrated and destroyed countless sacred images of Hinduism’s gods and goddesses and pulled down Hindu temples and built mosques over their ruins. Unable to bear the burden of this humiliating testimony of history, Vivekananda poured out his anguish at the feet of the Divine Mother in a Kali temple. ‘How could you let this happen, Mother? Why did you permit this desecration?’ he asked despairingly. Swamiji has himself recorded all this, and reports that Kali whispered in his heart: ‘What is it to you, Vivekananda, if the invader breaks my images? Do you protect me, or do I protect you?’” His questions were laid to rest. The goddess had awakened him to his own unexamined arrogance and temptation towards self-deification. This episode is unlikely to hold a moral lesson for Modi.