Has a ‘been there, already seen in Hollywood’ feel to it. 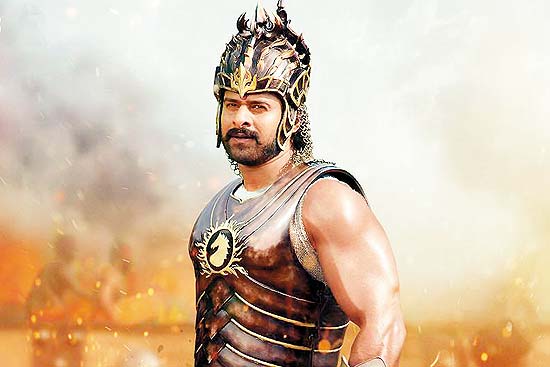 Does size matter? Not quite. In 2012, S.S. Rajamouli made Eega aka Makkhi, which eme­rged as a thoroughly enjoyable ride of a film with a small fly for the protagonist. Everything gets scaled up in his new outing, Bahubali, save entertainment. Despite the talent that has gone into making this larger-than-life spectacle, it doesn’t prove to be half as bewitching as Eega. Yes, there are some incr­edibly well-mounted sce­nes and eye-catching imagery—the child Shiva held above the water by the wounded mother figure Sivagami (Ramya), the hero Shiva’s (Prabhas) ride up the waterfall, his romance with Avantika (Tamannaah) in the midst of the butterflies, the eye-popping battle scenes..... Howe­ver, this Amar Chitra Kathaesque myt­h­olo­gical tale (about two cousins vying for the kin­gdom of Mahishmati) served up in the Lord of The Rings mould does not quite hold and has a ‘been there, already seen in Hollywood’ feel to it. Cliches abound: for the hero the warrior woman has to transform into a sultry seductress, and the enemy has to be weird, tribal brutes. Then you have Anushka Shetty’s cakey makeup. Most characters remain unidimensional, save the trusted lieutenant Kad­appa, my one takeaway from the film. The flashbacks, the backstories wit­hin backstories, the oddly structured narrative and the abrupt, cliffhanger end would have worked if the second of this two-part epic was to follow quickly. Alas, it’s still a year away.