Bahuguna Diary: 'Sunderlal Bahuguna, My Father, Is No Longer With Us…'

Need one say more? Read the iconic environmental activist’s life as the son saw it. 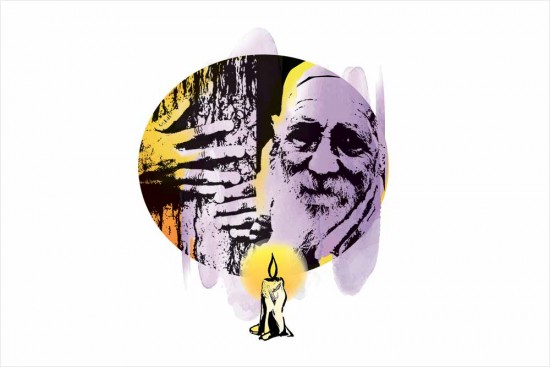 Sunderlal Bahuguna, my father, is no longer with us. He breathed his last at the age of 94 on May 21. I began to feel his absence only when I started receiving hundreds of calls from well-wishers offering condolences. But his absence is just physical and insignificant. Way back in 1996, while my father was sitting on his longest fast, 72 days, and his health was deteriorating fast, the Dalai Lama had sent a message telling him that death is inevitable, but it should be natural—like a ripe fruit falling to the ground from the tree. In keeping with my father’s innate spirit and nature, I consider his passing during a national calamity a natural one.

Let me recall an incident in my father’s life to explain exactly what I mean. Long ago, he was once returning to his village in a bus when one of its wheels suddenly came off on a narrow and muddy road. The bus, crammed with passengers, skidded off the road and hung precariously on the edge of a gorge. It seemed the bus would hurtle down into the valley hundreds of metres below, any moment. The spectre of death loomed ominously and everybody was fear-stricken. There was chaos all around. Some passengers started jumping out of windows to save their lives. Those who could not, began to cry and pray. All this while, the bus driver remained in a fix. He could not move an inch on his seat, fearing all of them would plunge into the valley of death. My father remained calm and composed. He reassured everybody not to panic and started guiding the passengers to get down one by one. It was only after the driver came out of the bus that he himself got down. In his lifetime, my father always sought to link his destiny with that of the common man. That is possibly why he chose to embrace death at the time of a pandemic, which has claimed the lives of thousands of people.

Journey Through Rail and Jail