Berlin isn’t coy about revisiting World War II. In this city, history is in your face. 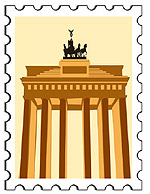 Berlin isn’t being coy about revisiting World War II, with May 8 marking the 70th anniversary of the end of that abomination. In this capital of reunified Germany, and variously the capital of style, uber cool, political churn, death-dealing and destruction of two world wars, the Cold War, and all manner of resistance movements—packed into less than a hundred tumultuous years—history is in your face. The German Historical Museum advertises its main event, which runs from April to October, on large banners outside its cavernous, ornate structure along the city’s iconic avenue, Unter den Linden. Titled ‘1945—Defeat. Liberation. New Beginning’, the exhibition’s face is a grinning Allied soldier cradling a broken bronze head of a glowering Adolf Hitler.