The day wanes for our greats. Lesser talents, a faulty system might cramp Indian cricket. 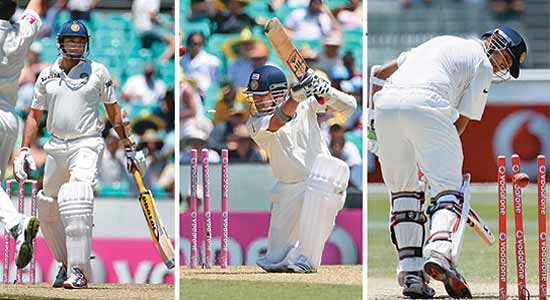 India in England was a glimpse of the future, and the future seemed to be one of unremitting gloom—young Indian batsmen, with the ball aimed at their eyes, danced and thrashed and flailed almost in fear, as if they had a gun to their heads. India in Australia is confirming that the future promises more ungainliness, and it’s here. The age of the greats, the “Golden Era” of Sachin Tendulkar, Rahul Dravid and V.V.S. Laxman, is drawing rapidly to a close. Dravid turns 39 this Wednesday, as does Tendulkar, in April; Laxman will be 38 in November. The fourth great, Sourav Ganguly, left three years ago, possibly the least potent of the four. Yet the spot he left is still not taken. That’s a telling comment on how things are, and how things will be when the time comes for the others to bid goodbye. Worse, two other very important players, Virender Sehwag and Zaheer Khan, will turn 34 this October.

India got smashed in Melbourne, and Sydney, at the time of writing, seemed headed the same way. It’d take a miracle to turn things around from here. If the age of miracles isn’t past, who better than Tendulkar and Laxman and Dravid to conjure them up? But miracles don’t usually recur—and certainly not in a demoralised, crushed team.