Now that the Crossword prize shortlist is out, we can separate the NRIs from the desi Indians. Or can one? 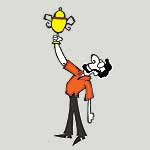 Now that the Crossword prize shortlist is out, we can separate the NRIs from the desi Indians. Or can one? According to the changed rules, only Indian passport-holders are now eligible to enter for the Rs 3 lakh literary prize in each of its five prize categories. That might explain why Salman Rushdie or Rahul Mehta or Sonia Faliero couldn’t make the cut. But the Cambridge-educated Sorbonne lecturer Anjali Joseph, who won the Betty Trask award for her debut novel Saraswati Park, wriggled past the NRI and expat filters, thanks possibly to her Indian passport. The others on the fiction shortlist are all desi Indians (as Crossword defines it): the surgeon duo Kalpish Ratna (The Quarantine Papers), Omair Ahmad (Jimmy the Terrorist), psychoanalyst Sudhir Kakar (The Crimson Throne) and Upamanyu ‘English August’ Chatterjee (Way to Go). The awards will be announced at a prize ceremony in Mumbai next month.