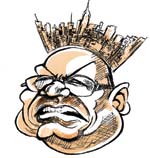 A detailed investigation by the New York Times into the foreign ownership of condos in an iconic Manhattan building—The Time Warner Center—has unearthed an Indian connection. Units 72B and 51E are owned by the Amantea Corporation, which has been traced to Vedanta’s Anil Agarwal. Documents confirm that he is behind condos purchased by the Amantea Corporation for $9.1 million in 2004, but his name doesn’t appear on public records. The deeds for two condos—one on the “maids floor” and another with sweeping views of Central Park —are signed by a New York lawyer.