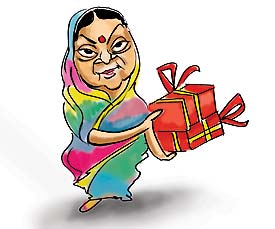 The Vasundhara Raje government’s decision to award the management of fair price shops in Rajasthan to Kishore Biyani of Future Group has raised eyebrows. While cooperatives have in the past helped supply goods and manage stores, handing the stores over to a private entity is a first. A leading economist who closely studies public distribution systems predicts that Biyani will stay in urban areas, and not go to poor, rural areas. Strangely, the political establishment reacted in a muted manner. But former finance minister P. Chidambaram was moved enough to tweet: “Has Rajasthan government given up on governance? What is the meaning of privatising fair price shops? Next on agenda may be law & order...”