Hardik Patel's deteriorating health prompted the politicians on his side to ask him to give up his fast and preserve his health “for the larger cause of farmers and for the bigger fight that lay ahead.” 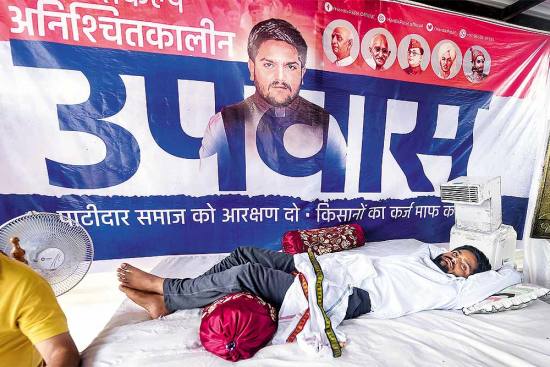 The BJP government in Gujarat will not brook even a whisper of protest in which Hardik Patel is involved. Hindsight tells the administration to be wary of the young Patidar leader whose massive rally in 2015 shook the ruling party. Patel, who was two when the BJP began its unbridled rule 23 years ago, is on a hunger strike again. His demands, in this order, are loan waiver for farmers, reservation in jobs and education for his community, and release of close associate Alpesh Kathiria, jailed on sedition charges.

The government is wary again, which is evident from its actions. Hundreds of Patel’s supporters across the state are being prevented from meeting him. Those who sneaked through the cordon are stopped and lathi-charged at the gates of Greenwood Resorts, the colony in Ahmedabad where the leader stays and holding his indefinite strike. On September 8, police didn’t spare mediapersons covering his return from a hospital. Some were roughed up. The bandobast is impregnable as Patel began his fast on August 25, exactly three years after his rally on this day in 2015.