‘BJP No Cogent Threat, But We Have To Improve Performance’

Manik Sarkar on what his government in Tripura is doing to nab Shantanu Bhowmick's assailants and the strategies the Left has chalked out to prevent the rise of the BJP in the state ahead of elections... 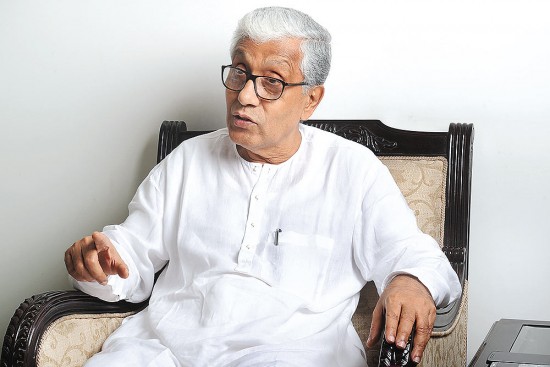 The recent killing of a young journalist in Tripura sent shockwaves across the country, fuelling demand for the arrest of the assailants and justice through speedy trials. Bula Devi speaks to chief minister Manik Sarkar to know, among other things, what his government is doing to nab the culprits and the strategies the Left has chalked out to prevent the rise of the BJP in the state a year before assembly elections.

Tripura has been rocked by the recent killing of journalist Shantanu Bhow­mick. What steps has your government taken to bring the culprits to book?

Agreeing to the Agartala Press Club’s dem­and, we have decided to set up a special investigating team. We will see to it that the case is handed over to the fast-track court. The government has given Rs 10 lakh to the bereaved family.

Okay. Coming to politics, is the BJP trying its hardest to dislodge the Left in Tripura? Is that party formidable?

It might be important to the BJP because we’re a Left-led state. We have been projecting the alternative by implementing our policy. We have thus been getting positive responses from the masses. This is why we have been (in the government) in Tripura for a long time. We don’t think the BJP is a credible threat to us. Actually the Left is a threat to the Left.

It means that we shall have to improve our performance further.