Bajpai takes a wide-angle lens to India-China ties, examining power imbalance, mutual suspicion and the US’ role in it. Kewalramani studies growing Chinese ambition through the prism of its fight against Covid-19. 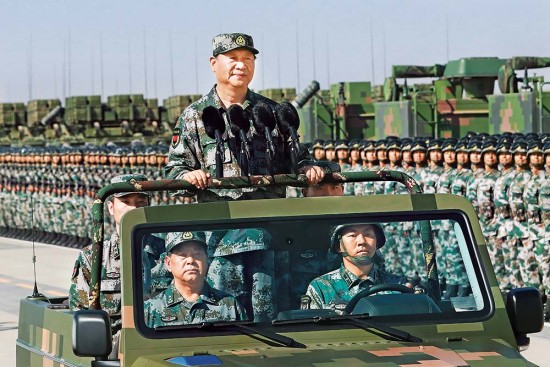 For obvious reasons of topicality, recent months have seen a number of new books on China. They include journalist Ananth Krishnan’s perceptive on-the-ground account of China’s recent trajectory and a riveting account by former diplomat Vijay Gokhale of the Tiananmen Square protests of 1989, which had a seminal influence on China’s domestic and external policies for decades.

The two offerings under rev­iew are from academia: Singapore-based Kanti Bajpai’s India Versus China, and Smokeless War by Manoj Kewalramani of the Bangalore-based Takshashila Institution.

Bajpai analyses Indian and Chinese perceptions of each other, their recurring border confrontations, their external partnerships and the asymmetry of national power. These four strands are mutually reinforcing, but he believes the ‘power gap’ is the overriding factor, preventing a rapprochement between the two countries.

Since 1962, the India-China border has been largely tense, with intermittent initiatives for confidence-building giving way to increasingly frequent confrontation. This has engendered a mutual suspicion of intentions. Actions and reactions are often based more on domestic political pressures and popular expectations than on strategic logic.

Bajpai relates India-China ties with trends in the global environment. This is problematic, because partnerships in the post-Cold war period do not fit into neat boxes.

The ‘power gap’ has widened in recent decades. Chinese conventional military superiority is somewhat mitigated by the border terrain and the maritime geography, but its larger nuclear arsenal and investments in cutting-edge technologies enhance the imbalance, further accentuated by India’s near-total dependence on imp­orted weapons. China leads on every economic indicator—GDP, financial reserves, technological innovation, labour productivity and infrastructure. It is ahead on human development indicators. Though soft power comparisons are more subjective, Bajpai infers from various surveys that here, too, China is ahead. Intuitively, it makes sense that persuasion is more effective when power is seen lurking in the background.

Bajpai tries to correlate India-China relations with decadal trends in the global environment. This is problematic, because partnerships in the turbulent post-Cold war period do not fit into neat boxes or clear timelines. His framework does not recognise that the most promising period for an India-China rapprochement was between 1988 (Rajiv Gandhi’s China visit) and 2005 (when pol­itical parameters for a border settlement were agreed). The out-of-the-box 2003 decision, to seek a resolution from a larger political perspective, showed strategic res­olve. This window of opportunity closed somewhat abruptly, with changes in the US-China-India dynamic.

While rightly underlining the importance of India aligning with the US in dealing with China, Bajpai dismisses India-Russia relations as transactional-commercial in nature. This is a curious description of a relationship that yields most of India’s weapons systems. Transfers of high-tech systems are based on mutual assurances that sensitive technologies will not be passed to potential adversaries. Also, India has security and economic interests in its extended neighbourhood of Central and West Asia, where the Russia-China dynamic dominates, and the US is largely absent. It calls for a more nuanced policy than a one-dimensional alignment with the US.

India’s policies have to focus on bridging the India-China power gap, but in the immediate term, it has to find diplomatic tools to secure its interests. This involves identifying economic, regional or global issues, where it can tilt the asymmetry or where the “pain threshold” of the other side is lower. The formula of strategic autonomy and interest-based engagement that often figures in external affairs minister S. Jaishankar’s articulations reflects this thought.

Smokeless War looks at China’s geopolitical ambitions and achievements through the prism of its handling of Covid-19. It meticulously documents how the Chinese leadership was initially caught off-guard, then got its act together, suppressed the pandemic in short order, reopened the country, injected a substantial fiscal stimulus and kick-started economic growth by the end of 2020.

The origin of the virus remains shrouded in mystery and secrecy. But it is known that Wuhan’s hospitals were overwhelmed with patients through December 2019, when the provincial authorities still remained in denial. By the time they clamped down on movements, about five million people had travelled abroad. China has dodged accountability for this export of the virus, whether due to ineptitude, negligence or worse.

Angry exchanges with the US on the origin of Covid bolstered Chinese nationalism, driven by the message that core values of socialism are superior to “Western values” of democracy.

Kewalramani shows how, after initial floundering, President Xi Jinping and the Chinese Communist Party (CCP) harnessed this black swan event to their domestic and external agenda. CCP propaganda projected Xi as personally leading the country’s heroic war against the dreaded virus (hence “smokeless war”). Ruthless restrictions and tracking protocols arrested virus transmission. The intrusive surveillance techniques used would probably find applications beyond the pandemic. The war on the pandemic provided the cover to fast-track elimination of factional rivals and induction of Xi loyalists in key positions.

The virus was suppressed remarkably quickly. By April, lockdowns were lifted and economic activity restarted, with a substantial stimulus package. After falling nearly seven per cent in the first quarter of 2020, GDP grew by about five per cent in the third quarter. China also declared that one key CCP target—eradication of absolute poverty by the end of 2020—had been achieved.

The pandemic provided the opportunity for fine-tuning the CCP’s already formidable propaganda machinery. Kewalramani notes that China’s public communications strategies have emb­raced a Western idiom, using technology and social media imaginatively. The ravages that the virus wrought in the Western countries were projected as proof of the superiority of the Chinese model of governance. The angry exchanges with the Trump Administration on the origin of the virus helped bolster Chinese nationalism, sustained by the message that core values of socialism are superior to “Western values” of democracy and human rights.

Externally, China rolled out its ‘mask diplomacy’—airlifting PPE, masks, drugs, oxygen and vaccines around the world. The Belt and Road Initiative, reinforced by a Health Silk Road, was pushed as the engine of post-pandemic economic revival in Asia.

China’s power projection in its neighbourhood was ramped up, from the South China Sea to the Taiwan Straits and Ladakh. Its military and economic clout ensured that countries hesitated to demand an independent investigation into the origins of the virus.  China neutered the WHO-sponsored team’s investigation by controlling its membership and limiting its access to records in Wu­han. Chinese diplomats aggressively countered negative reports abroad, with their now-familiar acerbic ‘wolf warrior’ diatribes.

Kewalramani suggests that the political and economic turmoil caused by the pandemic will drive countries and companies to red­uce over-dependence on China in critical supply chains. This drive has acquired momentum in India. But the broader sustainability of this trend and of a “China+1” strategy is still in question. A majority of American companies have already said they do not plan to move out of China. Public memory is short, corporate interests are abiding, and electoral logic in democracies favours short-term economic calculations over long-term strategic considerations.

China will present the biggest political, economic and strategic challenge for India in the coming decades. It is important to understand, from an Indian perspective, the internal and external dynamics of that country, and how the rest of the world is dealing with it. The books by Bajpai and Kewalramani (like the others mentioned earlier) contribute to this understanding.

(P.S. Raghavan is a former diplomat and ex-Chairman, National Security Advisory Board.)